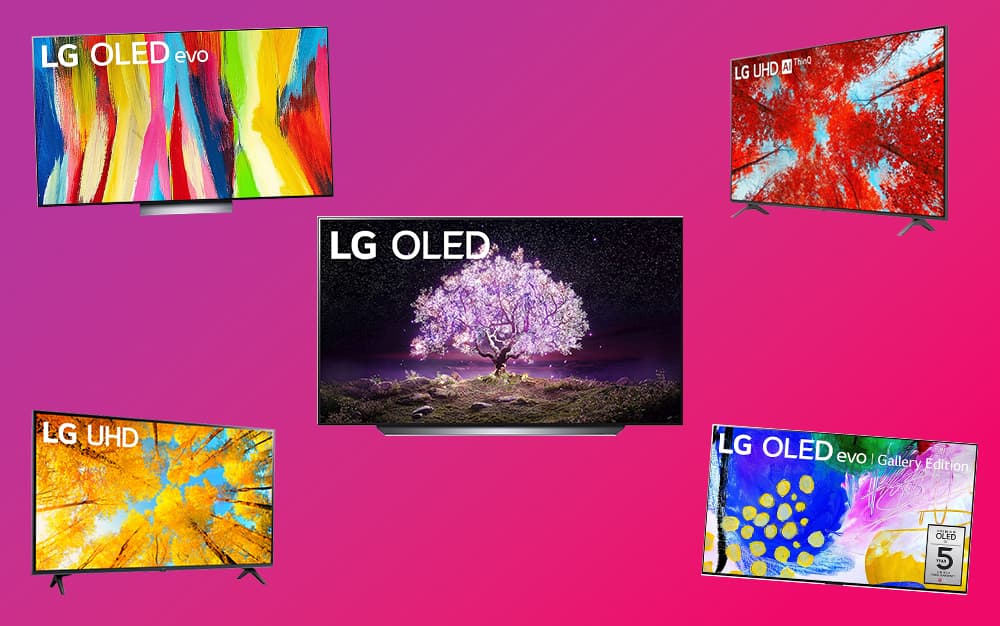 LG TVs are some of the most coveted screens on the market, and for good reason. New models and even their other devices released in recent years are known for their excellence in providing big, color-rich pictures, with impressive levels of detail and brightness. Of course, those are just the obvious features. LG TVs pack plenty of surprises within, from gaming-ready refresh rates to dynamic tone mapping, and more. Here’s a thorough roundup of the best LG TVs available right now.

How We Picked the Best LG TVs

LG TVs, like Samsung TVs, are known for some of the best televisions money can buy. Of course, it also means that they’re some of the priciest. Granted, the build quality of an LG TV surpasses many of the more affordable offerings on the market, so splurging now can land you a screen that can easily last you upwards of five years, if not longer. Of course, this also means LG TVs won’t be graded on a curve, as even “budget” offerings are still fairly pricey. Here are some of the things we looked for when picking out the best LG TVs.

Picture Quality: Good picture quality is almost assured with an LG television, but the difference between models is occasionally stark when put side by side. And the truth is, for most daily viewing, you don’t need to splurge on the pricey video optimization features. Still, some screens provide cinematic-quality visuals that may be worth the extra investment depending on what you plan on doing with your new television.

Usability: Pricier televisions come with pricey features, from optimized picture modes, to faster refresh rates, and even built-in OS to hop online and watch content from your favorite streaming destinations. Menus shouldn’t require any extra knowledge to navigate through, though. Built-in OS should also be responsive and speedy, and no more complicated to use than a good Android or streaming device.

Audio Quality: LG, like many other tech giants, likes to package its televisions with pricey sound systems. Fine, fair. But a fancy television shouldn’t cheap out on its built-in sound system. TV sound should be as immersive as its picture quality out of the box, without the need to purchase another expensive accessory.

Versatility: A good television works for everyday surfing and streaming. Great televisions can be used for gaming across a handful of consoles and PC, or serve as a dedicated home-theater screen. Getting more out of a single screen is always great, especially when buying a television that may run upwards of $1,000.

Why It Made the Cut: An incredibly popular television known for its spectacular picture quality thanks to the latest in AI optimization tech.

The LG OLED C1 is one of the most coveted televisions on the market, and its features and price point make it an easy pick for overall best. The picture quality in this display is breathtaking, thanks to the self-lit pixels that light up the screen. While you can customize settings at will, C1 Series screens are smart enough to do it themselves. Its a9 Gen4 AI Processor 4K uses deep-learning algorithms to detect not just scenes but genres, to make sure everything from movies to live sports looks its best.

Speaking of action, the LG OLED C1 is built for it, with a Game Optimizer made for smooth gaming experiences on consoles and PC. This minimizes screen tearing and slowdown, to provide the stunning visual quality you want from a modern gaming experience. Cinephiles will also appreciate the TV’s Filmmaker Mode, so you can watch classics and modern blockbusters the way the director intended. Its built-in speaker, powered by Dolby Atmos, delivers multi-dimensional sound which only bolsters its immersive properties. This television, especially for its price, is virtually flaw-free, aside from its clunky remote. Considering everything else the LG OLED C1 has going for it, this may be an easy pill to swallow.

Why It Made the Cut: This television provides vivid 4K with active HDR at a reasonable price.

— Not suitable for serious gaming

For a 65-inch television at an incredibly competitive price, the LG UQ9000 Series is an excellent and affordable option.

The picture quality of this television is incredibly vivid, even if it’s not an OLED screen. LG UQ9000 taps into the bevy of 4K content on cable or streaming services, bringing everything from live TV to nature documentaries to life, just like a screen twice its price. Better yet, even if you’re streaming less than high-definition content, this television comes with some fairly solid 4K upscaling, which gives dated resolutions a visual boost. The sound quality in this television is also fairly impressive, thanks to AI learning which automatically mixes sound to amplify action-packed content for some fairly good immersion.

Why It Made the Cut: The LG OLED Evo C2 Series is bigger, brighter, and more importantly, faster than other televisions in its class, making it perfect for gaming.

— Less than perfect speakers, for the price

The LG OLED Evo C2 packs a powerful AI processor that guarantees the best and brightest picture quality for everyday use. Additionally, its optimization capabilities are perfect for anyone who enjoys hardcore gaming on PC or consoles.

Yes, like many of the other best LG TVs, its Game Optimizer keeps up with the intense speed of modern gaming, thanks to built-in NVIDIA G-Sync and FreeSync Premium. There are even four HDMI 2.1 ports that can accommodate an Xbox Series, PS5, or Nintendo Switch, as well as a gaming PC, laptop, or streaming device. Aside from that, Evo C2 is built with brightness in mind, which may be your secret weapon to climbing leaderboards. When playing games with dark and shadowy areas like “Elden Ring” and “Counter-Strike: Global Offensive,” LG OLED EVO C2 may scope out the competition or Eldritch horrors better than any other screen out there. Its refresh rate is even handy for Cloud Gaming if you’re into that sort of thing. Aside from its game-friendly features, the picture quality isn’t just good, it’s stunning, with HDR optimization and dynamic tone mapping, which improves just about everything you can watch on it.

Why It Made the Cut: LG OLED Eco Gallery Edition G2 is aptly named, and so thin it practically melts into any wall you hang it on.

When deciding between form and function, the LG OLED Eco Gallery Edition bravely proposes, “Why not both?”

For those looking to transform rooms into creative and artful spaces, there’s no television that works better with this design aesthetic than the Eco Gallery Edition. Mounting this LG TV to a wall leaves no gap, so it stands out like a proverbial Monet painting, albeit one that can stream episodes of “Breaking Bad”. Its brightness capabilities are a cut above the rest as well, with a built-in brightness booster. Tapping into it can make already well-lit visuals up to 30 percent brighter than traditional OLED screens. This means deeper blacks, luminous whites, and some seriously vivid color clarity.

Aside from these extra boosts, all of the best LG TV features are here too, including the a9 Gen5 AI Processor 4K which optimizes picture quality and an above-average refresh rate for gaming. Still, expect to pay a little more for this LG TV because of all of its glitzy features and gorgeous build quality.

Why It Made the Cut: For those looking to save a few bucks, this new model is a fantastic entry point to LG televisions.

OLED screens are bright, and 65-inch televisions flood any room they're in with great content, but they aren’t exactly easy on the wallet. The LG UQ75 Series LED TV packs a surprising level of quality at an affordable price.

Like LG TVs twice to four times the price of the Smart LCD, the UQ75 Series is  fully 4K, and on a decent sized, 43-inch screen to boot. It also has great 4K upscaling, which is great for watching older legacy content. Because of its affordable 4K capabilities, LG UQ75 Series LED TV is a solid choice for a dedicated streaming television. Think of it as a flashier, fancier Roku TV. It even comes with a fair amount of smart home capabilities with popular brands like Google Assistant, Amazon Alexa, Apple AirPlay, and even HomeKit. It also has Active HDR 10 Pro capabilities, which ensures a far better picture than cheap streaming TVs. However, the menus on this device are a little bogged down, and not terribly intuitive, especially when it comes to navigating through them.

Things to Consider Before Buying an LG TV

Great (But Optional) Add-Ons: Every choice in this best LG TV round-up works fantastically right out of the box. And, for these prices, they’d better. However, LG makes plenty of great accessories that help you get the most out of your fancy new television.

LG Soundbar: For most, the sound systems inside the LG TV should be more than enough to suit most dedicated TV and film watchers. But they simply haven’t made a television with a truly pristine sound system out of the box. Theater-quality audio requires, at the very least, a great soundbar. The LG S90QY 5.1.3 ch High Res Audio Soundbar with Dolby Atmos is one such animal and packs the kind of subwoofers that are strong enough to give you goosebumps, like Disneyland’s “Hall of Presidents.”

LG Wall Mounts: Thin televisions are perfect for mounting on a wall, which not only frees up space in any entertainment center, but allows you to work even big screens into smaller rooms. The EZ Slim Wall Mount works with many popular LG models 65 inches and up, and has a minimal form that you want from a good mount. The LG OLED Gallery Floor Stand takes full advantage of the LG OLED Eco Gallery Edition G2 Series aesthetics, to make the screen look like a freshly painted work of art on an easel.

Q: Which LG television is best?

For our money, the LG OLED C1 Series 65-Inch is the overall best LG TV but the LG OLED Evo C2 Series, 65-Inch is also fantastic, though a little more expensive.

LG TVs are very good quality, especially when it comes to its OLED TV offerings. These televisions are also a little more affordable than other OLED televisions.

Sony’s standard LED TVs are brighter than LG LED TVs, but are generally far more expensive than many LG OLED TVs. LG TVs tend to have better support for gaming since they feature less input lag.

LG TVs, especially its OLED offerings, are some of the best and most popular televisions on the market. The LG OLED C1 Series 65-Inch is our pick for overall best, because of its picture-perfect visual quality. For a television that won’t slouch on speed for hardcore gaming, the LG OLED Evo C2 Series, 65-Inch works great as a screen for consoles and PCs alike. If you’re looking for the most affordable deal, LG UQ75 Series LED TV, 43-Inch packs some great 4K picture at a competitive price.