Best Cameras for Astrophotography in 2022

Capture the beauty of the night skies with these excellent cameras. 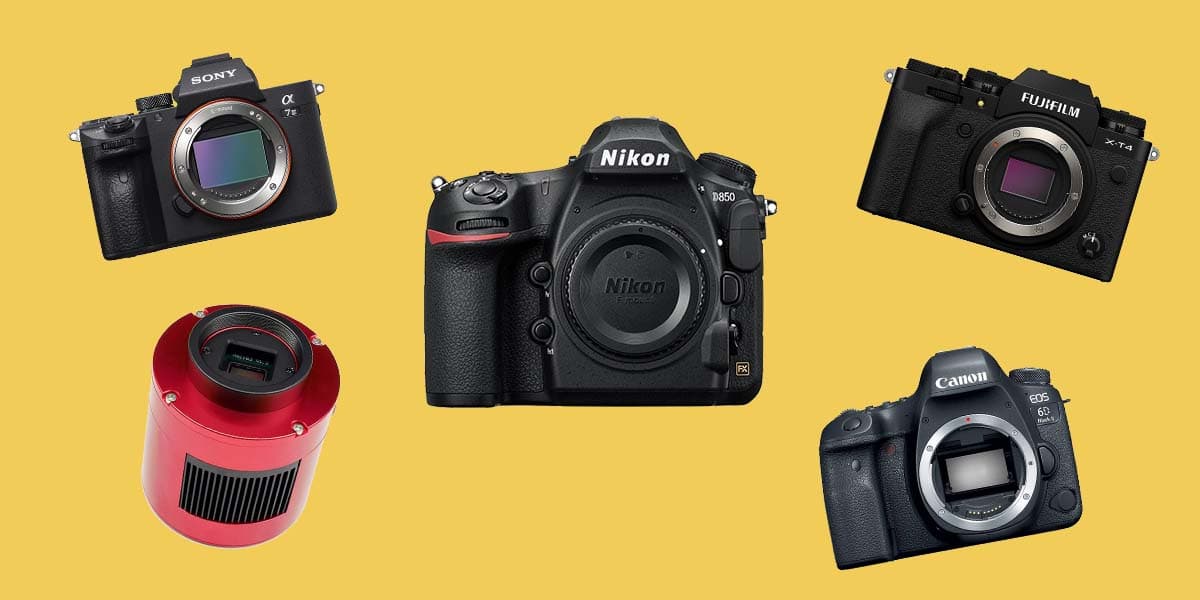 Astrophotography is popular with hobbyists, advanced amateurs, and professionals alike, and a high-quality camera is essential for capturing the cosmos. With NASA’s recent achievements and the number of celestial events that have been visible from planet earth in recent years, it's no surprise that interest in this style of photography continues to grow. The best cameras for astrophotography will help you capture the beauty of the stars from your own backyard — although it will certainly help if your backyard happens to be in an area without much light pollution!

How We Picked the Best Cameras for Astrophotography

When selecting the cameras in this buying guide we considered sensor size, megapixel capability, low-light performance and budget. When compiling our choices, we made sure to include a mixture of DSLR cameras, mirrorless cameras, and at least one dedicated astrophotography camera. Products that appear in this guide were selected through a mixture of hands-on use, editorial reviews, and user feedback.

Why It Made The Cut: The 45.7 megapixel sensor found inside the Nikon D850 makes it a beast when it comes to shooting astrophotography — giving shooters ultra-detailed images with very little digital noise, even at high ISOs.

— Large and heavy compared to other options

The Nikon D850 is a standout for capturing the galaxy. Its 45.7-megapixel sensor means files that are detailed and high-res enough that you can crop into them without fretting over pixel loss. The D850 can shoot 4K UHD video at 30 frames per second (fps), performs well at high ISOs, and has fully illuminated buttons on its body, making it easy to operate in the dark. Although the D850 has an optical viewfinder, the camera’s rear tilting touchscreen makes it easier to focus in dark environments, without having to keep your eye to the lens.

Although it's bulkier than some of the other options on the market, the D850 has a rugged build that will work well in even the harshest environments, and you simply can’t beat the high-megapixel images it takes of the night sky.

Why It Made The Cut: The Sony A7 III remains one of the best mirrorless cameras for low light photography, making it a great tool for the aspiring astrophotographer, plus, since it's an older model it has a slightly less expensive price point.

The Sony A7 III provides an excellent mixture of features that will appeal to astrophotographers who are interested in a versatile camera that can be used for other types of photography as well. Although there is a newer model available in the Sony A7 IV, the A7 III remains a highly capable camera and a great entry point into full-frame mirrorless cameras. It has a large-capacity Sony battery that can shoot approximately 710 shots per charge, excellent performance in low-light situations, and autofocus points that cover 93 percent of the camera’s frame. That capability makes this camera a great tool for composing wind-angle starscape shots that also include elements like rock formations or distant lighthouses.

Why It Made The Cut: Fujifilm’s flagship mirrorless APS-C camera is a powerful tool for shooting in the dark. The tactile dials also make it more comfortable to operate in low-light conditions than some of its competitors.

— Doesn’t come with an external charger

This lightweight APS-C camera is an excellent choice for the astrophotographer who is interested in both stills and video. Fujifilm has created a camera that performs well in both departments and makes it easy to switch back and forth between the two. The Fujifilm X-T4’s 425 AF points work well in low lighting conditions, and the 26.1- megapixel sensor should provide plenty of resolution for most astrophotographers. It  includes a number of beautiful film-simulation modes for enhancing your starscapes in-camera, and the tactile controls make it easy to change settings when working late at night in low-light conditions.

Why It Made The Cut: The ZWO Optical asi183mc Pro is designed to be used with a telescope for capturing deep-sky objects like nebulae, supernova remnants and the moon. It’s a specialized piece of equipment that will be able to capture exquisite details that a DSLR or mirrorless camera would certainly miss.

— Requires a telescope to use
— Requires specific software to process images

Once it's attached to a great telescope, the ZWO Optical asi183mc Pro is a dedicated astrophotography camera that will allow you to get detailed shots of deep-sky objects. The electronic shutter minimizes camera shake and it can shoot at up to 19 frames per second. An integrated TEC cooling system reduces sensor temperature when it's in use, which helps reduce noise when capturing objects located in deep sky.

Like all astrophotography cameras, the ZWO will need to be plugged in and connected to specific software to actually process the images that it captures. However, this particular model is designed to be used without RGB color filters — minimizing the amount of equipment you will need when you head out to shoot.

Why It Made The Cut: This older model DSLR is still capable of capturing the beauty of the night sky with its 26.2 megapixel sensor and expansive ISO range, plus since it's an older model it will be a touch more affordable than some of the other options in this guide.

Although the Canon EOS 6D Mark II is half a decade old, this mid-range DSLR remains an excellent budget-friendly choice for astrophotographers. It’s one of the lightest full-frame DSLRs on the market, has an impressive ISO range that makes it good for shooting late at night, and since it's a EF-mount lens, the glass that it utilizes is significantly more budget friendly than some of the other options in this buying guide. The vari-angle touch screen also makes it easy to compose images without having to use the optical viewfinder, and although it lacks 4K video capabilities, it does offer interesting features like a 4K time-lapse mode.

Things to Consider Before Buying a Camera for Astrophotography

Many of the most hyped up specs found on modern day cameras are irrelevant when it comes to astrophotography — meaning the most expensive and newest model might not always be the best suited for shooting late at night. For example, when you’re shooting astrophotography, your camera is going to be mounted on a tripod, so specs like in-body stabilization, or extremely fast autofocus won’t hold much weight. Here’s what you should be paying attention to before you purchase a camera for astrophotography.

Generally speaking, a camera with a larger sensor will perform better at higher ISOs than a camera with a smaller sensor. Having a camera that can produce an image with limited noise at a high ISO is important for astrophotography. When you shoot late at night, you will likely push your camera to a high ISO, so that it can capture subtle nighttime detail. Cameras with large sensors deliver more pixels and better detail. Larger sensors also mean that the camera is more efficient at collecting light to produce high-quality images.

When it comes to astrophotography, the debate over whether mirrorless or DSLR is better is sort of a moot point. Generally speaking, a mirrorless camera will have a lightweight body, but will be pricier than an older model DSLR. A DSLR will generally have more lens options — and with astrophotography the lens that is attached to your camera is typically more important than whatever body you are shooting with. Many of the advanced settings found in mirrorless cameras aren’t really relevant to astrophotography either. A third option that is overlooked by many photographers, is a dedicated astrophotography camera. These cameras attach to a telescope and give photographers the tools to capture objects in deep space that can’t be viewed with the naked eye.

Q: How many megapixels does a camera need for astrophotography?

A camera that can shoot more megapixels will ultimately give you a more detailed image, which is something that’s pretty important in astrophotography. While a 45.7- megapixel camera will render more detail in your shots of the sky, these files will also take up more hard-drive space to store. Most modern mirrorless cameras with a 26-megapixel sensor will give you plenty of details for astrophotography, but more megapixels certainly won’t hurt. If you’re looking for the most pixels, just expect to pay more up front for your camera, and have ample hard drive space to store those large files.

Q: What kind of camera is best for astrophotography?

An astro-specific camera that can be mounted to a telescope is probably the “best” at astrophotography, as it will get you the clearest shots of the night sky. Unfortunately these cameras are only designed for this purpose and won’t be nearly as versatile as some of the DSLRs and mirrorless cameras that can be used for astrophotography. They also require that you own a telescope to mount them on. If you’re planning to shoot the stars with a DSLR or mirrorless camera, look for something that has high ISO capabilities and is good at controlling image noise.

Q: Can any camera do astrophotography?

Most modern DSLRs and mirrorless cameras are a good fit for astrophotography because of their large sensor sizes, high ISO capabilities and control of image noise.

Q: Is mirrorless better for astrophotography?

Mirrorless and DSLRs are both fine choices for astrophotography, but realistically there are a lot more mirrorless options currently on the market. A modern day mirrorless camera will do a great job in low light conditions, and is more compact than a DSLR, making it easy to travel with. However, older DSLR models will often have large sensors and can be found for better deals on the refurbished market.

Q: Which is better for astrophotography, Canon or Nikon?

Canon and Nikon both produce great cameras that can be used for astrophotography. Which is better is really a matter of preference. For many photographers it comes down to what lenses they already have in their collection.

Q: How do I start astrophotography?

Getting started with astrophotography is easy — head to a place with limited light pollution, grab a tripod to stabilize your shots, and start shooting. For a related tool, here is our guide to the best binoculars for astrophotography.

Q: What gear do you need for astrophotography?

In addition to a camera that can handle shooting at high ISOs with minimal noise, you will want a wide, fast aperture lens and a tripod — so that you can stabilize your long exposures as you capture the beauty of the night sky.

The specs and settings that make a camera good for astrophotography are very different from what makes a camera good at other forms of photography — meaning you don’t necessarily need to splurge and get the newest or most expensive camera on the market to get gear that will be great at capturing the night skies. When shopping for a camera for astrophotography, the most important specs to consider are its sensor size, megapixel capabilities and its ISO range. The crucial thing to look for is a camera that will perform well and create low-noise images when it is operating at high ISOs. For a great budget pick, consider the Canon EOS 6D Mark II, which is a capable and classic option that still promises strong results. If you’re looking for a great option to use with your telescope, the ZWO Optical asi183mc Pro will go farther than the competition. The Nikon D850 on the other hand, is our overall favorite for most people for its power and versatility.