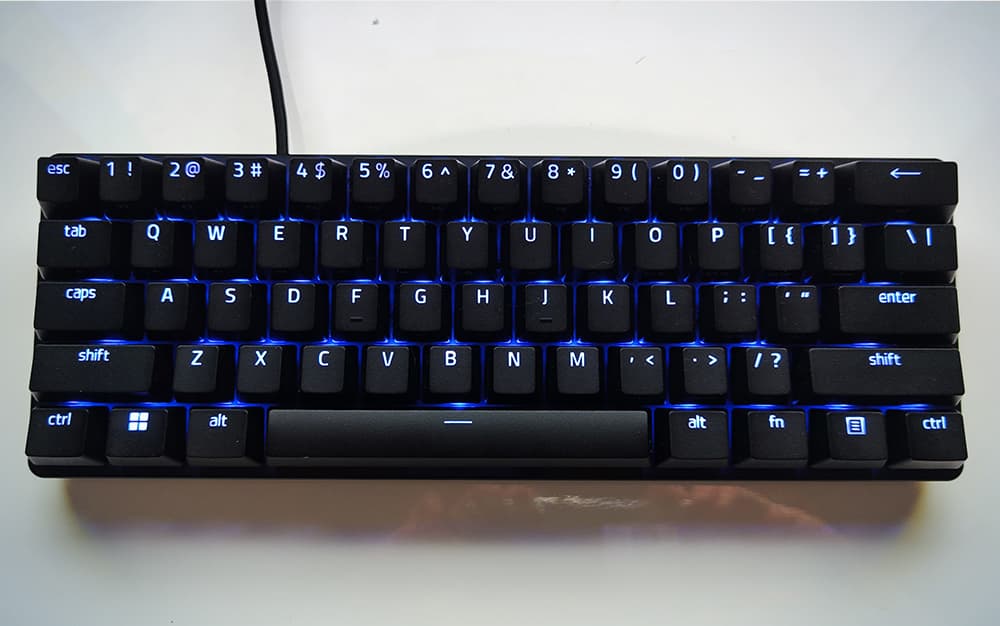 Despite their weird name, the best 60 percent keyboards may be just what you need for your current game or work station. It doesn’t matter if we’re talking Manhattan real estate or spare room on your desktop: space is precious. And for many, a full-blown keyboard just isn’t necessary. Scaling down a necessary part of any computer setup is an easy way to streamline things just a little bit. These smaller keyboards also come packed with plenty of the same features out of their larger counterparts, while being small enough to be totally portable. Here’s a selection of our favorite 60 percent keyboards.

How We Picked the Best 60 Percent Keyboards

What is a 60 percent keyboard? In general, it’s a keyboard missing its keypad, arrow, and function keys. A smaller form factor makes these perfect for anyone that needs to downsize their desk space. Here are a few things we took into consideration when picking out the best 60 percent keyboards.

Size: Small as they may be, some 60 percent keyboards are a bit larger than they should be. Not only should they take up less space on a desk, but the better ones slide into a drawer when they’re not in use. The absolute best ones even tuck nicely into a backpack. Of course, users should be careful when handling these keyboards, considering their price points.

Build Quality: A keyboard doesn’t have to look sleek and flashy to work properly, but it certainly doesn’t hurt. However, sometimes a cheaply made keyboard will not just look bad, but it will operate poorly. This isn’t universal, but consider that more affordable offerings will come with at least a couple compromises.

Responsiveness: Most 60 percent keyboards are mechanical, which provide better switch actuation and better feedback, all while providing a satisfying clicking experience.

If you click a button on a keyboard does it render on screen immediately? If you’re using a wired keyboard, latency issues are virtually nonexistent. Things get murkier once you decide to go wireless. Whether you’re typing up a document or playing “Hades,” experiencing any lag is enough to make even cooler heads go batty. For more options, check out the best gaming keyboards.

Hotkeys: Just because these keyboards are missing 40 percent of their usual inputs doesn’t mean these buttons are gone forever. Close inspection of many models reveals secondary and even third functions that can be accessed through toggle keys. The more the merrier, but only if triggering these is done easily.

Why It Made The Cut: For the money, Razer Huntsman Mini Analog packs plenty of features in an itty-bitty space.

Cons:
— Pricey
— May be overkill for non-gaming applications

The Razer Huntsman Mini Analog is expensive, but if you’re looking for a 60 percent keyboard you can count on for years to come, it’s difficult not falling in love with it. Everything about this feature-rich keyboard screams high quality.

PBT keycaps with a matte finish have a satisfying tactile feel on your fingertips, and are built to not only withstand the test of time, but intense gaming sessions. Though the keyboard packs 61 buttons, the possibilities are almost limitless because each button can be programmed with multiple commands. A light tap renders one input, while a full press renders another. Besides being portable, Huntsman Mini’s RGB capabilities are powered by Razer Chroma, which provides plenty of customization options all through a handy Windows, iOS, or Google app. Lighting presets provide for even more immersion in your favorite PC games, which Razer Huntsman Mini Analog is optimized for. If you don’t do a lot of gaming, a more inexpensive offering may be prudent, but they don’t come half as gorgeous as this one. Check out our full review of the Razer Huntsman Mini.

Why It Made The Cut: An intuitive companion software makes customizing ANNE Pro 2 a breeze, especially at its price point.

Pros:
— Pair with up to four devices via Bluetooth
— Up to eight hours battery life
— Obinskit Console easily customizes lighting effects and macros

Cons:
— Lag when switching between devices

For those looking for a premium 60 percent keyboard for work and gaming at an affordable price, the ANNE Pro 2 comes with a fair amount of versatility.

For one, not only does it connect via a wired connection, but via Bluetooth as well. This allows it to sync up to Windows, Mac, iOS, and Android. You can connect it to four devices at once, in fact. And while it will lag slightly switching between devices, that’s still some fairly impressive juggling. When wireless, you can expect it to run for up to eight hours on a full charge. Aside from the device compatibility, ANNE Pro 2 60 Percent Keyboard has the tactile feel you want out of a keyboard in this price point. The Caps Lock button does double duty as “Magic FN,” which makes it easier to access your full suite of function keys for gaming purposes. But where ANNE Pro 2 truly sings is its intuitive Obinskit Console, which customizes lighting effects and macros and even lets you set up multiple profiles. It’s one of the best 60 percent mechanical keyboards you can nab for less than $100. For other options, check out the best wireless keyboards.

Why It Made The Cut: This eco-friendly offering isn’t the most technically impressive keyboard, but it’s easily the most fun.

Cons:
— Slightly larger than many 60 percent keyboards
— Runs on batteries

The Logitech POP Keys Mechanical Wireless Keyboard may not be the best 60 percent keyboard, but it’s certainly the cutest. Its retro look and feel blend form and function, and unlike most keyboards on the market, has the power to turn heads.

The round keys are an homage to the typewriters from the ancient times, and typing on them feels just like clicking and clacking away on one of those analog devices. Unlike a typewriter, you can connect this device on up to three different devices using a handy Easy Switch key. There are even eight swappable Emoji keys (with four on the keyboard itself) that make showing off your personality that much easier, all customizable via user-friendly software. To accommodate for these keys, this one comes a tad wider than many 60 percent keyboards. It also runs on batteries, which feels a little dated. But it’s also carbon neutral, making it Climate Pledge-friendly, which is mightily impressive. If you’re looking to go a more traditional route, these are the best desktop computers.

Why It Made The Cut: RK Royal KLUDGE packs a lot of features that the pricier models have at a pretty competitive price.

Some folks love it when the sound of typing on a keyboard echoes loudly in rooms big and small. Understandable: it makes you feel like you’re really getting work done. If you love a loud wired workhorse, the RK Royal KLUDGE 60 percent keyboard is an excellent value.

Any good mechanical keyboard worth its salt is ready to be customized. The RK Royal KLUDGE offers three different key types: red, brown, and blue. Red key types quiet and keystrokes are fast and fluid. Blue provides the best in tactile feedback, for accurate with solid clicky feedback. Brown splits the difference between the two. The RK Royal KLUDGE even provides a switch and key pullers should you wish to swap them out. Its built-in RGB lighting is incredibly bright, almost jarringly so. This 60 percent keyboard is also louder than average. Whether you decide that these aspects are bugs or features is entirely up to you.

Why It Made The Cut: It’s not nearly as flashy as the other 60 percent keyboards in this compilation, but it’s a fair value at its price point.

Cons:
— Mechanical in name only

Unlike other 60 percent keyboards, Snpurdiri is available in twelve different designs. This means you won’t have to buy any new keycaps with your new keyboard to make it match whatever aesthetic you’re going for. Gamers swear by its reliability and low-latency, and the satisfying click of the keys during popular PC games like “Fortnite.” It’s also small and comfortable to use over long periods of time, and has some solid RGB lighting capabilities. Unlike many other 60 percent keyboards, it’s not officially mechanical. It sells itself as “mechanical-like.” Sneaky, but not altogether deceitful. The macros to unlock its full potential are also a little difficult to understand, but for a budget offering, none of its cons are deal breakers.

Things to Consider Before Buying a 60 Percent Keyboard

Smaller keyboards save space, look sleek, and tuck away into tiny cupboards and backpacks. However, they’re not for everyone. For one, a full-sized keyboard contains 40 percent more keys, including a whole row of function keys (F1-F12), a keypad, arrow keys, and “Extra Keys,” including but not always limited to: Print Screen, Scroll Lock, Pause Break, Insert, Home, Page Up and Page Down, Delete, and End keys. This doesn’t mean that these keys are gone altogether. FN keys on these keyboards will unlock them for you, but it will just take an extra keystroke. Better yet, 60 percent keyboards like the Razer Huntsman Mini and the ANNE Pro 2 60 Percent Wired/Wireless Keyboard come with dedicated apps to customize buttons and macros to your heart’s content.

Q: What is the best 60 percent keyboard?

Our pick for best overall 60 percent keyboard is the Razer Huntsman Mini for its versatility and build quality.

Q: Is a 60 percent keyboard good for typing?

The tactile acuity makes 60 percent keyboards good for typing. However, if you use arrow keys for editing, you may be better off using a full-sized keyboard.

Sixty percent keyboards are fantastic for gaming because they allow more freedom of movement, especially when playing intense genres like first-person shooters.

Q: How much does a 60 percent keyboard cost?

On average, 60 percent keyboards cost anywhere from $30 to a couple hundred dollars. Our overall best, the Razer Huntsman Mini, falls somewhere near the higher end of the spectrum.

Q: What 60 percent keyboard has the fastest switches?

Among the fastest 60 percent keyboards are the ANNE Pro 2 60 Percent Wired/Wireless Keyboard and the Razer Huntsman Mini 60 Percent Analog Keyboard.

Q: Are 60 percent keyboards good for everyday use?

Yes, 60 percent keyboards are great for everyday use, because their small form factor saves space on any work or gaming space.

The whole adage about big things in small packages doesn’t always ring true, but it’s certainly apt when it comes to 60 percent keyboards. Not only are these little wonders customizable, but they streamline desktops offering more space and more freedom of movement. For a keyboard that works in both gaming and work applications, Razer Huntsman Mini is dependable, and our overall best pick. ANNE Pro 2 60 Percent Wired/Wireless Keyboard is also very reliable, but a little more affordable. For the most interesting 60 percent keyboard, Logitech POP Keys Mechanical Wireless Keyboard is eye-catching and even has dedicated emoji buttons.