Put the Nintendo Switch down, and pick your iPhone up. 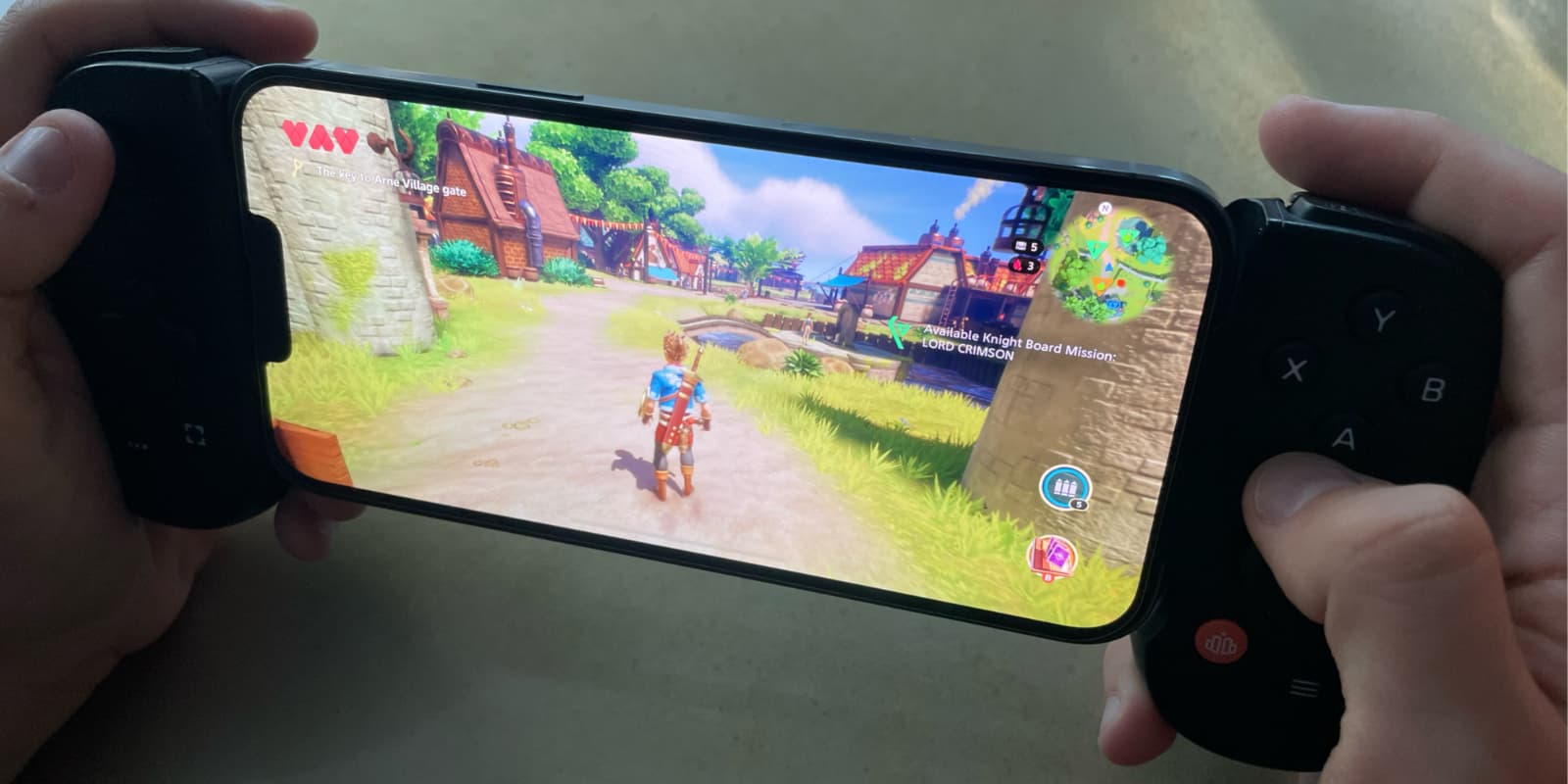 Let me be blunt: The Backbone One gaming controller is the iPhone accessory I've wanted since games started appearing on Apple's smartphone platform in 2008. It fulfills the promise of turning the iPhone into a credible Nintendo Switch competitor, and distinguishes itself in a field crowded with alternatives from companies like Razer, GameSir, and even Microsoft, Sony, and Nintendo. Read on for our full Backbone One Controller review.

You’ve already been able to sync Bluetooth controllers — including those designed for the Xbox, PlayStation, and Nintendo Switch — to an iPhone to play games for a few years. However, using a Bluetooth controller with an iPhone requires you to keep your smartphone in a stand, or attach the two devices using a clip, which looks and feels awkward. Controller shells, like Razer’s Kishi, GameSir’s X2, and the Backbone One are designed to fit around the sides of the iPhone to turn it into a more svelte handheld gaming device. There’s a huge market for iPhone gaming controllers, but the Backbone One is the best one I’ve ever used.

Who Needs a Controller to Play iPhone Games?

Most people who play iPhone games use its touch screen, which makes sense for titles like “Angry Birds” and “Fruit Ninja,” which were designed specifically for that device. If you’re playing in-depth Japanese role-playing games like “Fantasian,” or racing games like “Horizon Chase 2,” the iPhone’s touch screen isn’t ideal. Your fingers end up getting in the way of the action, and it’s easy to accidentally hit multiple buttons at the same time, or miss them entirely.

The Backbone One solves this problem by allowing you to play games using a pair of analog sticks, four face buttons, and four trigger buttons — just like you would on a game console controller. The Backbone One has the same exact button layout as controllers from Nintendo and Microsoft, so it feels familiar to use immediately. This isn’t the first controller shell for the iPhone, but it feels a lot more secure than any other one I’ve tested as part of this Backbone One Controller review.

Its handles are sloped downward, which makes the controller a little taller, but far more comfortable to grip, and the textured, plastic Backbone keeps the controller from slipping if your hands get sweaty. These design details may seem small, but they make the difference between ending your gaming session because of a hand cramp, or because you finished a difficult challenge.

The Backbone One’s solid construction impressed me from the moment I took it out of the box. It didn’t bend much when I tried to twist it, the buttons and triggers felt sufficiently clicky, and the analog sticks were positioned in the perfect place. My fingers immediately fell into their natural place: thumbs on the left analog stick and face buttons, pointer fingers on the top triggers, middle fingers on the back of the controller for support, and ring and pinky fingers curled around the controller’s handles. This controller felt so natural that I could’ve mistaken it for one made by Nintendo if I picked it up with my eyes closed.

This is a sharp contrast to Razer’s Kishi controller, which has a more squared-off design that requires me to curl my middle, ring, and pinky fingers behind the controller when playing. Both controllers require you to strap your iPhone inside their shell, but the One is made out of two pieces of thick plastic, which you can easily pull apart (as shown in the GIF above). The Kishi, by contrast, requires you to unlock its two pieces by pulling on a pair of finicky tabs on the back. Don’t get me wrong, the Razer Kishi is a fine iPhone gaming controller, it’s just undeniable that the Backbone One has the better design.

I don’t have many quibbles to bring up in this Backbone One Controller review, but I do wish it had a dedicated home button that exited out of the game I was playing once I was done. The controller does have a button that opens Backbone’s app to reveal your game library, but that’s as close as you’ll get. Beyond that small nitpick, using the Backbone One was smooth sailing.

The Backbone One Gets Up and Running in Seconds

Part of the Backbone One’s appeal is that there’s no set-up process. I opened the controller shell, plugged its Lightning jack into my iPhone’s charging port, and was ready to start playing. Games with controller support instantly recognized that the Backbone One was connected to my iPhone, and I was able to play games without touching its screen. Backbone does have an app, which allows you to see all the available games on the App Store with controller support and hop into your most recently played games, but it’s entirely optional. I found myself launching games the old-fashioned way.

The Backbone One is compatible with any iPhone going back to the 6S, which was released in 2015 — with the exception of the original iPhone SE, which retained the iPhone 5’s design. This controller will work identically, whether you have the newest iPhone, or one that’s half a decade old. It’s worth noting that this controller draws power from your iPhone, and you may notice a more significant battery drain on older, smaller iPhones. I had no problems using the Backbone One with an iPhone 13 Pro Max, but your mileage may vary. Playing games on your iPhone will tax its battery more than almost any other task, but you can charge the smartphone while you play by plugging a cable into the Lightning port on the bottom of the Backbone One’s right handle.

Finally, Console-Quality Gaming on an iPhone

I tested the Backbone One controller by playing hours of “Fantasian,” “Chrono Trigger,” “Horizon Chase 2,” “Tunic” (via Xbox Cloud Streaming), “Ys Origins” (via NVIDIA GeForce Now streaming), and the controller never skipped a beat. The controller recognized every input, even when I was pressing multiple buttons at the same time to pull off a more complicated move. If I made a mistake during a game, but recognized it early enough, it was possible to correct myself instead of fumbling with the touch screen, losing a life, and having to start over. When I messed up during a game, it was entirely my fault, and nothing to do with Backbone's controller.

The controller's familiar button layout allowed me to concentrate on gameplay rather than figuring out which buttons to press. Both of the Backbone One's analog sticks moved swiftly and never drifted (aka got triggered accidentally and automatically), which is a problem that's been plaguing the Nintendo Switch's Joy-Con controllers since the console's launch in 2017. The instant responsiveness of the Backbone One's analog sticks made it easy to navigate the expansive worlds of “Fantasian” and “Tunic” without accidentally running into a wall — or worse, enemies. The Backbone One's buttons produce a satisfying clicking sound, and would depress without a tremendous amount of force, so I could hit one with the tip of my thumb rather than mashing it down, which would introduce the risk of hitting two buttons at the same time.

The only time the Backbone One struggled was when I played games streamed from cloud services, which has nothing to do with the hardware and everything to do with latency introduced by playing games over the internet. When Xbox's connection to the internet was strong, playing a game on my iPhone was virtually identical to the experience of enjoying it on Microsoft's latest console. Many companies — including Microsoft — list their cloud gaming services as "in beta," and I definitely felt that. Cloud gaming is especially hairy on iOS because Apple doesn't allow companies to create a native application for these services on the iPhone, so you're basically playing a high-end game through the Safari web browser.

Still, being able to play an Xbox game at home, leaving, then picking up where I left off on my iPhone without skipping a beat was pretty incredible. If you get a Backbone One today, you'll reap all the benefits of improvements to cloud gaming services that materialize over the next few years. Backbone's hardware is ready, now it's time for gaming companies to catch up.

Should You Get the Backbone One?

If the iPhone is your primary gaming device, and the titles you play support the use of an external controller, the Backbone One is an essential accessory. We can also highly recommend it to anyone who has a current-generation Xbox or PlayStation and wants to give cloud gaming a chance. Game streaming technology is in its infancy, but it’s improving quickly. Apple has spent tens (if not hundreds) of millions of dollars developing and optimizing the chip inside the iPhone to make sure it’s capable of running high end games.

The Backbone One allows you to take advantage of the iPhone’s processing power to enjoy home console-quality games on the go, without a diminished experience. After using this controller regularly for a few weeks, I couldn’t imagine playing an iPhone game without it.