Astronomers Discover Two Giant Stars in the Midst of Colliding 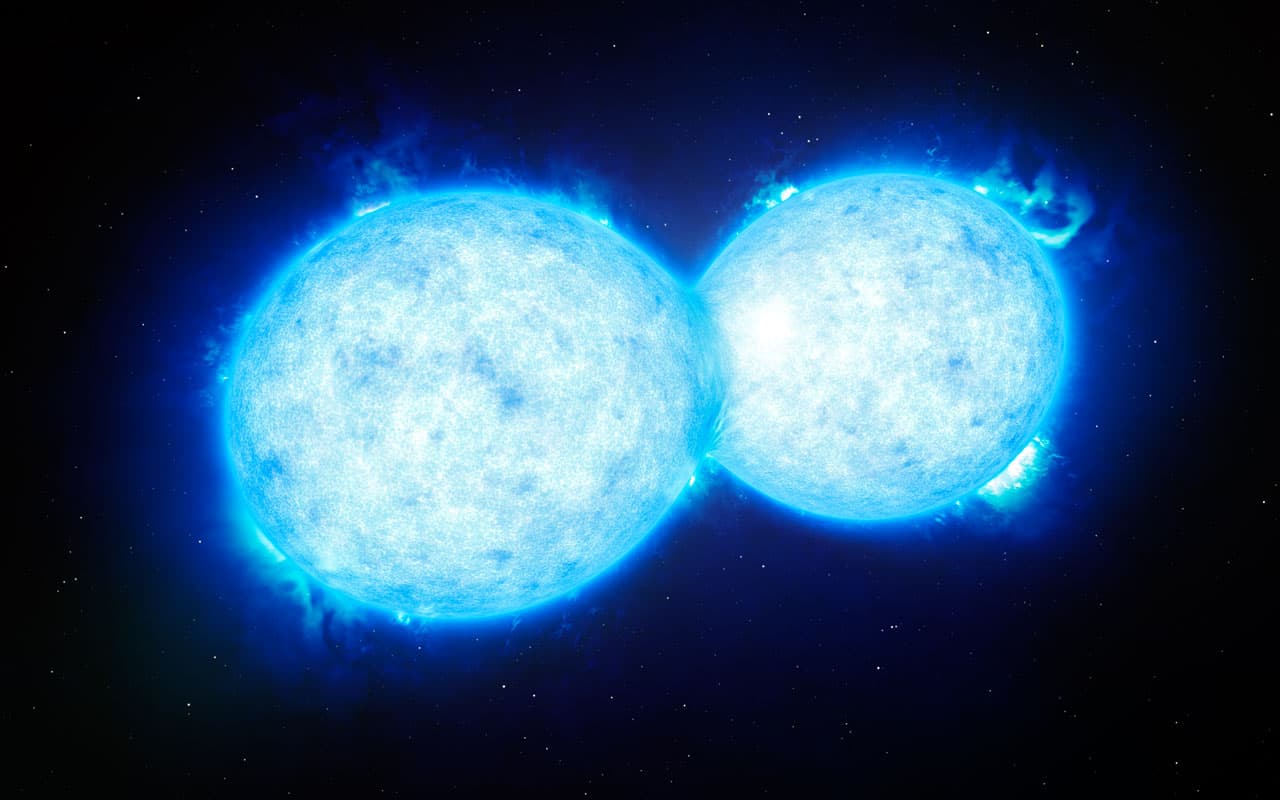 A Dance of Two Stars

160,000 light-years away in the Tarantula Nebula lies a double star system called VFTS 352. It is here that the international team of astronomers have found a double star system where the components are close enough to touch each other. VFTS 352’s two stars are both very hot, very bright, and very massive. They orbit each other in a little more than a day and are separated by only 12 million kilometers. This proximity has caused a bridge to form between them. Astronomers are predicting a collision that could end in two ways: the formation of a single giant star or a binary black hole.

Soon, this “dance” will lead to one of two outcomes. The first possible outcome is that the two stars merge into a quickly rotating giant star that, if it keeps spinning rapidly, might end in a long-duration gamma-ray burst, which is one of the most energetic explosions in the Universe.

Alternatively, lead scientist Hugues Sana explains that in the second possible outcome  “the components would likely end their lives in supernova explosions, forming a close binary system of black holes. Such a remarkable object would be an intense source of gravitational waves.”

Read This Next
Name Game
NASA May Still Rename James Webb Telescope Over Homophobia Controversy
Search for Life
Former Astronaut Suggests Specific Planet for James Webb to Search for Life
Far Out
Proposed Mission Would Explore Interstellar Object ‘Oumuamua
History Repeating
Astrobiologist: Humans Are Going to Ruin Outer Space
On The Event Horizon
Here's Why Everyone's so Excited About the Black Hole Image
More on Off World
Shoo
9:09 PM on futurism
Scientists Warn Giant Asteroid Is Actually Swarm, Nearly Impossible to Destroy
Floodgates
Yesterday on the byte
Astronomers Complain That the JWST Is Producing Too Much Data, Too Fast
Til Death
Yesterday on the byte
Buzz Aldrin Marries His Employee at the Young Age of 93
READ MORE STORIES ABOUT / Off World
Keep up.
Subscribe to our daily newsletter to keep in touch with the subjects shaping our future.
+Social+Newsletter
TopicsAbout UsContact Us
Copyright ©, Camden Media Inc All Rights Reserved. See our User Agreement, Privacy Policy and Data Use Policy. The material on this site may not be reproduced, distributed, transmitted, cached or otherwise used, except with prior written permission of Futurism. Articles may contain affiliate links which enable us to share in the revenue of any purchases made.
Fonts by Typekit and Monotype.