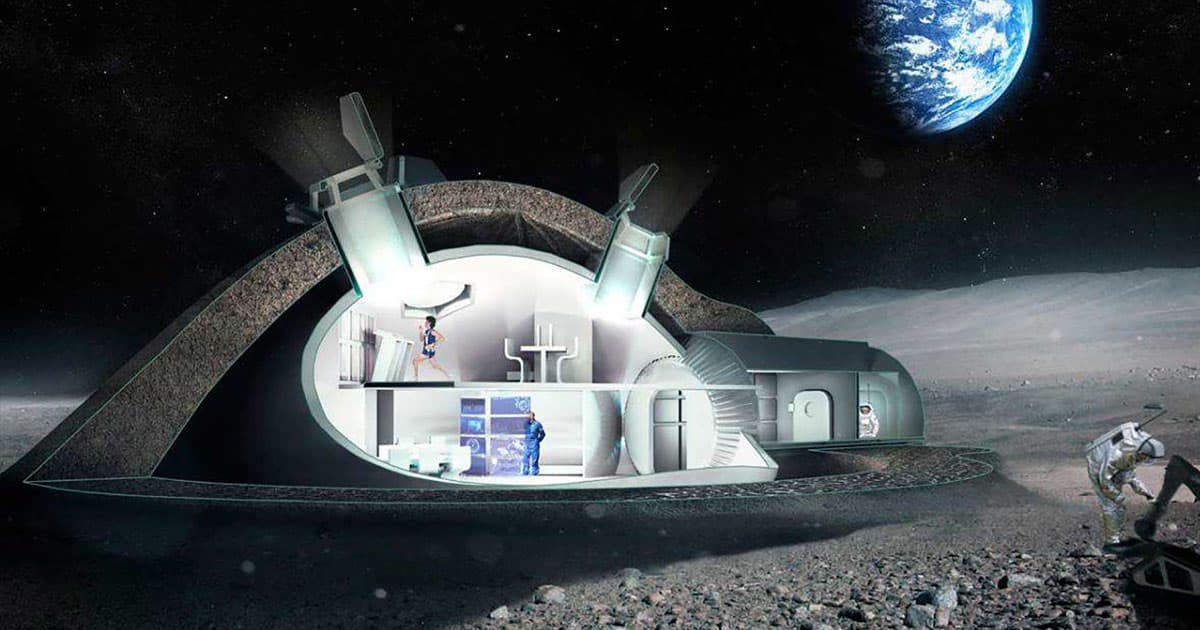 In cooperation with the European Space Agency (ESA), a team of European researchers have conducted a... strange experiment. They mixed urea — the main compound found in mammalian urine — with materials, including Moon rocks, to test if we could one day use astronaut pee to build a lunar base.

The urea itself acted as a "plasticizer" — stuff that allows us to shape other harder materials into different forms. In their unusual experiment, the team used an analog of lunar regolith, or loose Moon rock, and mixed it with the urea.

The big advantage: using local materials is a lot easier — and dramatically cheaper — than lugging heavy construction supplies from Earth.

"To make geopolymer concrete that will be used on the moon, the idea is to use what is already there: regolith and the water from the ice present in some areas," Ramón Pamies, a professor at the Polytechnic University of Cartagena, Spain, and co-author of the study published in the Journal of Cleaner Production last month, said in a statement.

"But moreover, with this study, we have seen that a waste product, such as the urine of the personnel who occupy the moon bases, could also be used," Pamies explained. "The two main components of urine are water and urea, a molecule that allows the hydrogen bonds to be broken and, therefore, reduces the viscosities of many aqueous mixtures."

Using a 3D printer, the team squeezed out Playdough-like shapes out of the urine concrete. 3D printing has become one of the most promising ways to build structures on distant planets including the Moon and Mars.

After heating them up to a temperature of 80 degrees C (176 Fahrenheit), they found that the resulting structures could support heavy weights — even after eight freeze-thaw cycles that simulated several day and night cycles on the lunar surface.

But there's still one minor hurdle to overcome before we decide to build Urinetown on the face of the Moon. "We have not yet investigated how the urea would be extracted from the urine, as we are assessing whether this would really be necessary, because perhaps its other components could also be used to form the geopolymer concrete," co-author Anna-Lena Kjøniksen, professor at Østfold University College, said in the statement.

READ MORE: Astronauts could use their own urine to build moon bases one day [Space.com]

More on 3D printing on the Moon: Russia is Planning to 3D Print a Moon Base

Read This Next
Mars Rock Blues
Mars Rock Samples Probably Won't Infect Earth With Deadly Martian Plague, Scientist Says
RIP
Unfortunate Comet Flies Too Close to the Sun, Disintegrates and Becomes a Ghost
Three for Three
Europe Is Also Sending a Spacecraft to Explore Venus, a Blazing Hellhole
Pee Your Pants in Space
Scientists Are Trying to Make Spacesuit Underwear Less Putrid
Space Food
Huh, Turns Out Space Food Has Gone From Gross to “Pretty Fantastic”
More on Off World
No More Hops, Mor...
Yesterday on the byte
Suggestion: NASA Should Make Its Mars Helicopter Do Some Gnarly Tricks From "Tony Hawk"
Exoplanet Dance
Tuesday on the byte
Scientist Releases Amazing Video of Exoplanets Orbiting Distant Star
Space Junk News
Tuesday on the byte
Two Large Chunks of Space Debris Just Almost Collided in an Epic Disaster
READ MORE STORIES ABOUT / Off World
Keep up.
Subscribe to our daily newsletter to keep in touch with the subjects shaping our future.
+Social+Newsletter
TopicsAbout UsContact Us
Copyright ©, Camden Media Inc All Rights Reserved. See our User Agreement, Privacy Policy and Data Use Policy. The material on this site may not be reproduced, distributed, transmitted, cached or otherwise used, except with prior written permission of Futurism. Articles may contain affiliate links which enable us to share in the revenue of any purchases made.
Fonts by Typekit and Monotype.