The timing of this new feral hog study really couldn’t be any better. 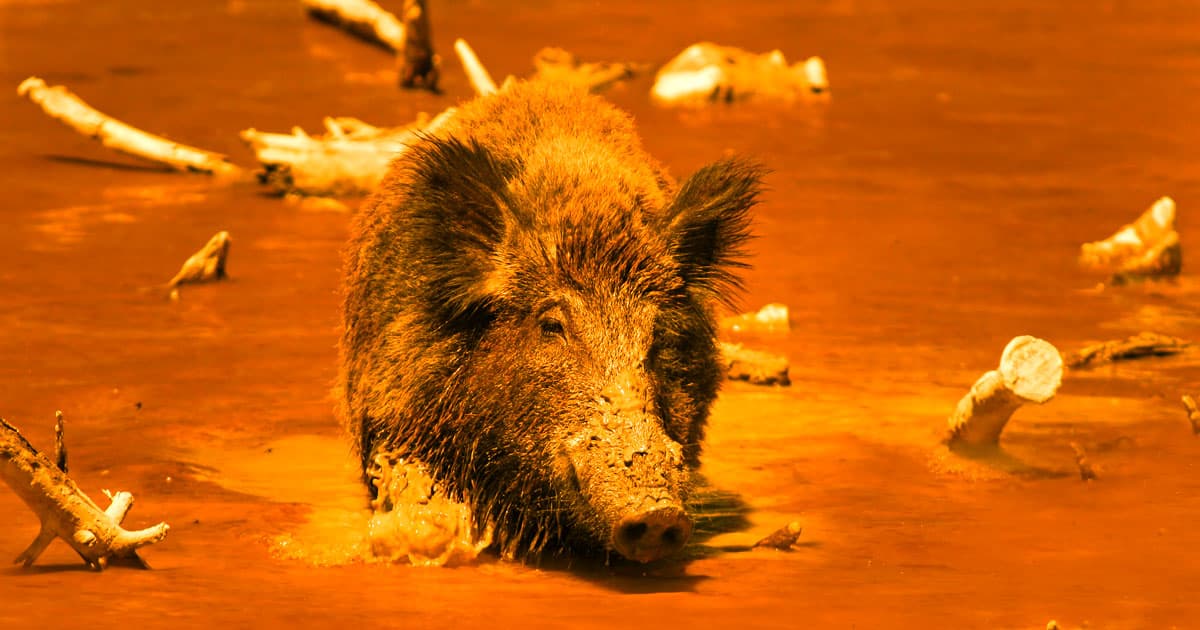 In the wake of two deadly mass shootings, singer-songwriter Jason Isbell posted a tweet on Sunday asserting that the people arguing about the definition of "assault weapon" on Twitter don't actually need the guns.

The next day, Twitter user William McNabb replied with a tweet seemingly suggesting that he does need an assault weapon — to kill the "30-50 feral hogs" that run into the yard where his children play.

And thus a new internet meme was born.

With that backstory established, imagine you're a pair of Clemson University scientists who just spent countless hours researching the very real problem feral hogs pose to farmers — and your study is set to publish on Tuesday.

What are the chances?

Strange timing aside, according to the study, which was published in the journal PLOS Biology, feral hogs are an often-overlooked threat to livestock and crops, with most human-wildlife conflict research focusing on predators such as tigers and wolves.

But while the Clemson researchers don't deny that wild hogs are a problem for many Americans, they're quick to note that McNabb's suggestion of taking an assault rifle to a herd of "30-50" of the critters won't solve it.

"That’s what we would call opportunistic hunting of hogs," researcher Shari Rodriguez told Inverse. "So while you may get an animal or two, it’s a drop in the bucket. It really does nothing to decrease the population of hogs."

What might work, according to Rodriguez: flashing lights, rope fences strung with flags, and food baits placed far away from wherever you don't want the hogs to be.

So, in McNabb's case, it seems that would be anywhere your kids don't play.

Read This Next
Super Old Vintage
Wine Grapes Haven’t Changed Much Genetically Since Ancient Rome
Futurism
As It Turns Out, Environmentally 'Protected' Lands Really Aren't
Futurism
To Combat Wildlife Trafficking, Tech Companies Take a Stand
Futurism
Hacking a Cow's Gut Bacteria Could Make More Meat, Less Pollution
Futurism
By Tweaking a Single Gene, Scientists Trick Plants Into Being More Water-Efficient
More on Earth & Energy
That Sssssucks
4:28 PM on the byte
Unfortunate Snake Causes Power Outage for 10,000 Homes
Fashion Week
Yesterday on the byte
Scientists Discover Horrifying Crab That's Covered in "Hair"
Fire Bird
Friday on the byte
Experts Say Birds Are Catching on Fire on Power Lines and Starting Wildfires
READ MORE STORIES ABOUT / Earth & Energy
Keep up.
Subscribe to our daily newsletter to keep in touch with the subjects shaping our future.
+Social+Newsletter
TopicsAbout UsContact Us
Copyright ©, Camden Media Inc All Rights Reserved. See our User Agreement, Privacy Policy and Data Use Policy. The material on this site may not be reproduced, distributed, transmitted, cached or otherwise used, except with prior written permission of Futurism. Fonts by Typekit and Monotype.