You Can't Make This Stuff Up: Amazon Warehouse Robots Slipped On Popcorn Butter

Consider this your daily reminder that the robots haven't taken over yet. 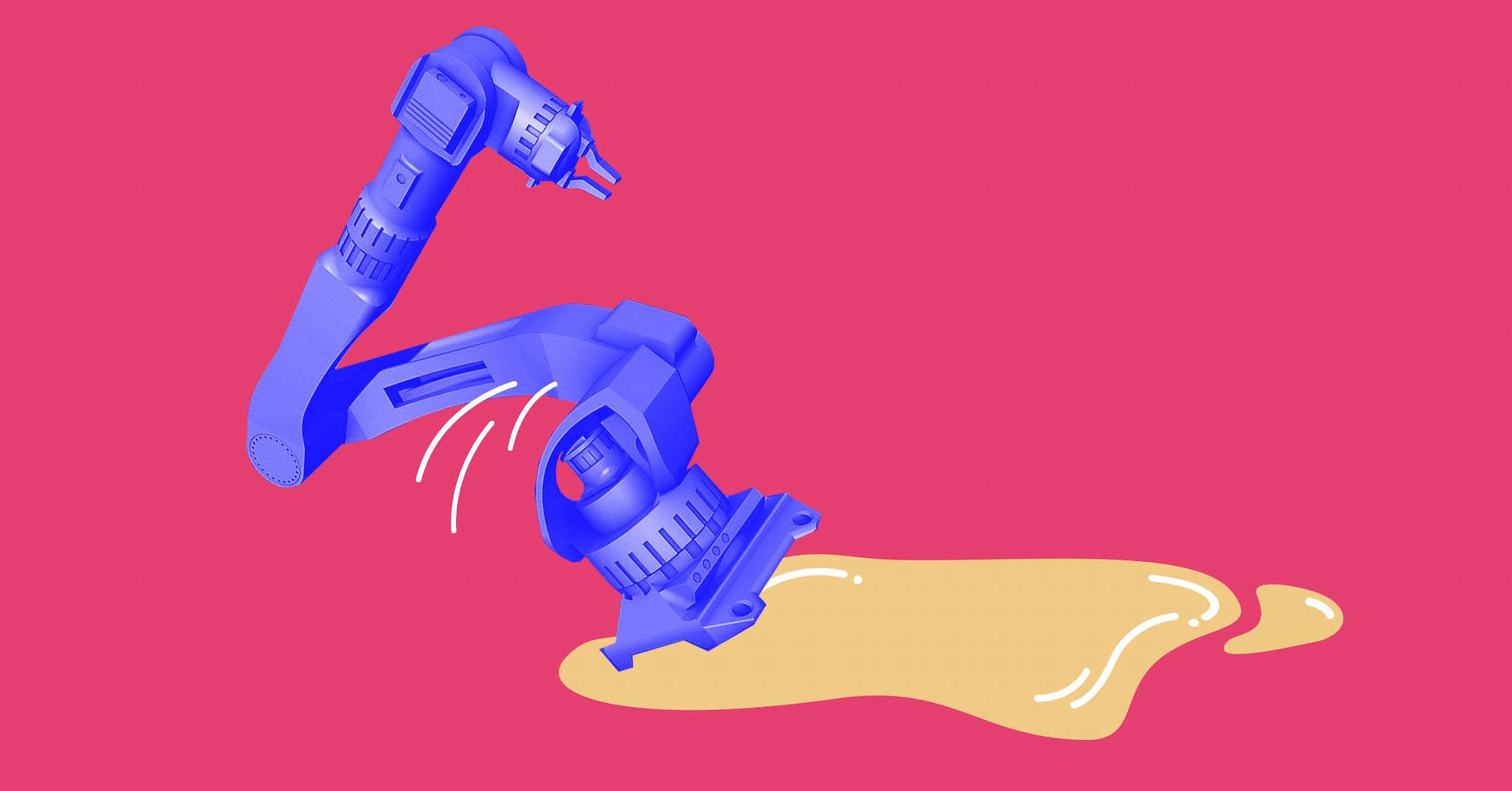 If you're like me, you've fantasized about watching a robot, so perfectly engineered for its particular task, just freakin' eat it. Well, you're in luck: apparently, some popcorn butter fell off a shelf onto the floor of an Amazon fulfillment center. That confused the hell out of a bunch of warehouse robots. They ran over it a bunch of times and then started tripping over the slippery mess.

The news comes from Tye Brady, Amazon’s Chief Technologist, who shared the story yesterday at MIT Technology Review’s EmTech Next, a symposium on the future of artificial intelligence and robots in the workforce. According to Brady, when the robots started slipping and sliding on the puddle of butter, the robots likely encountered an encoder error. That would be a similar glitch to the one that made a mall’s security robot slip on wet bricks and fall into a fountain last July.

After all of the fucked up shit that happens in Amazon fulfillment centers, like employees who have to pee in bottles to meet their work quotas, it’s nice to relax and imagine some good old fashioned robot slapstick. Life is difficult and we’re all going to die, but also we live in a world where robots slip on popcorn butter!

Since no video of such an event is currently available, we asked our art team to help us imagine what such a slip might have looked like. And they did not disappoint:

Many have argued that using robots to automate the workforce would be a slippery slope (Editor's note: We at Futurism apologize for this joke, multiple variations of which were repeated in our newsroom). But this robot mishap actually has a lesson in there somewhere: it's valuable to have actual humans work alongside our clumsy robot coworkers.

Amazon views its fleet of over 100,000 warehouse robots as a supplement to, and not a replacement for, its human workforce, according to MIT Technology Review. And that makes sense — someone’s gotta help the hilarious, fumbling pile of metal get back on its foot-stands and mop up the butter that threw them off in the first place.

When leadership consultant Warren Bennis famously described the factory of the future — a dog to keep people from interfering with the automated workflow, and a man to feed the dog — he may have gotten it wrong. He completely forgot to sort out who would mop up all the butter on the ground and keep the popcorn out of reach from snacking robots.

Read This Next
From the Dept. of Things to Buy
Get the Echo Show 5 at Half-Price During Labor Day Deals on Amazon Hardware
From the Dept. of Buying Things
How to Stream “Lord of the Rings: The Rings of Power” on Amazon
FROM THE DEPT. OF THINGS TO BUY
The Best Prime Day 2022 Generator Deals
FROM THE DEPT. OF THINGS TO BUY
Save $500 on a Schwinn E-Bike and More Electric Vehicles on Prime Day
FROM THE DEPT. OF THINGS TO BUY
Apple Watch Series 7 Prime Day 2022 Deal
More on Robots & Machines
FROM THE DEPT. OF...
Thursday on futurism
The Best AV Receivers in 2022
FROM THE DEPT. OF...
Wednesday on futurism
The Best Air Purifiers of 2022
FROM THE DEPT. OF...
Tuesday on futurism
The Best Budget 3D Printers for 2022
READ MORE STORIES ABOUT / Robots & Machines
Keep up.
Subscribe to our daily newsletter to keep in touch with the subjects shaping our future.
+Social+Newsletter
TopicsAbout UsContact Us
Copyright ©, Camden Media Inc All Rights Reserved. See our User Agreement, Privacy Policy and Data Use Policy. The material on this site may not be reproduced, distributed, transmitted, cached or otherwise used, except with prior written permission of Futurism. Articles may contain affiliate links which enable us to share in the revenue of any purchases made.
Fonts by Typekit and Monotype.