Amazing Simulation Shows the Moment That a Star First Ignites

"This new simulation will help us directly address fundamental questions we could not definitively answer before." 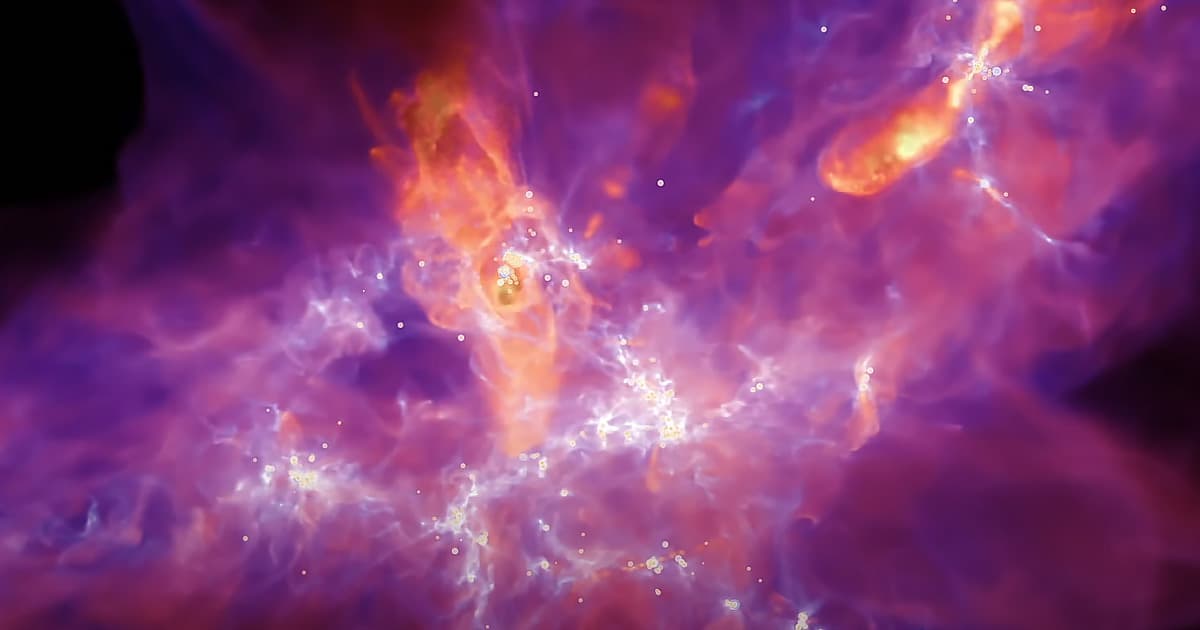 A team of researchers from Northwestern University have created a high-resolution 3D simulation of the moment a star is formed.

The gorgeous animation is the most realistic of its kind to date, according to the team, and could teach us valuable lessons about how stars are formed in the universe.

The computational framework, called STARFORGE (Star Formation in Gaseous Environments), simulates a gas cloud 100 times the mass of any simulation previously possible and includes details such as jets of energy escaping out of the star's poles, supernova activity, and radiation.

Stellar jets are massive fountains of gas that escape while a star is forming. They also play a significant role in determining the eventual mass of a given star.

"People have been simulating star formation for a couple decades now, but STARFORGE is a quantum leap in technology," said Claude-André Faucher-Giguère, astrophysicist at Northwestern, and senior author of an accompanying paper that was accepted into the journal Monthly Notices of the Royal Astronomical Society, in a statement.

"It's been a very challenging question to explore because of the range of physical processes involved," he added. "This new simulation will help us directly address fundamental questions we could not definitively answer before."

It's exceedingly difficult to follow the process of a star forming, as it can take tens of millions of years and is often obscured from view.

"When we observe stars forming in any given region, all we see are star formation sites frozen in time," co-author Michael Grudić said. "Stars also form in clouds of dust, so they are mostly hidden."

To render the stunning animation, the team took an astronomical amount of data into account, including gas dynamics, magnetic fields, and gravitational forces. In fact, the finished product was so computer intensive that it took up to three months to run a single animation using one of the most powerful supercomputers in the world.

STARFORGE has already led to tangible results, allowing the researchers to better understand the role of stellar jets in the creation of stars.

"Jets disrupt the inflow of gas toward the star," Grudić said in the statement. "They essentially blow away gas that would have ended up in the star and increased its mass."

While it's not an entirely new discovery, the simulation allowed them to solidify what they already knew.

"People have suspected this might be happening, but, by simulating the entire system, we have a robust understanding of how it works," Grudić said.

The insights it provides could have even greater consequences on our understanding of the universe, the scientists say.

"Understanding where we come from and how we're situated in the universe ultimately hinges on understanding the origins of stars," he added.

READ MORE: Stunning simulation of stars being born is most realistic ever [Northwestern University]

More on star formation: Astronomers Surprised to Find That Stars Compete With Each Other

Read This Next
FROM THE DEPT. OF THINGS TO BUY
The Best Tablets for Note-Taking of 2022
Butcher Shop
Neuralink Employees Admit Company Has Killed 1,500 Animals So Far
HIV Vaccine
Scientists Hopeful About Promising Results From HIV Vaccine
Health Revelation
Chris Hemsworth Reveals Grim Genetic Test Results, Will Take Break From Acting
PDA
Elon Musk Is Faving Posts on Twitter That Are Making Our Skin Crawl With Embarrassment
More on Sci-Fi Visions
Crypto Apocalypse
Wednesday on the byte
Crypto Investors Despondent After Losing Life Savings in FTX "Bloodbath"
LIfe Finds a Way
Dec 1 on the byte
Billionaire Private Astronaut Suggests Reviving Dinosaurs
Cybersecurity Dis...
Nov 13 on the byte
Insurance Company Refuses to Pay Ransom, So Hackers Start Releasing Health Records of Up To 10 Million People
READ MORE STORIES ABOUT / Sci-Fi Visions
Keep up.
Subscribe to our daily newsletter to keep in touch with the subjects shaping our future.
+Social+Newsletter
TopicsAbout UsContact Us
Copyright ©, Camden Media Inc All Rights Reserved. See our User Agreement, Privacy Policy and Data Use Policy. The material on this site may not be reproduced, distributed, transmitted, cached or otherwise used, except with prior written permission of Futurism. Articles may contain affiliate links which enable us to share in the revenue of any purchases made.
Fonts by Typekit and Monotype.