Here Are The Most Amazing Shots of the NEOWISE Comet

The video from the ISS will blow your mind. 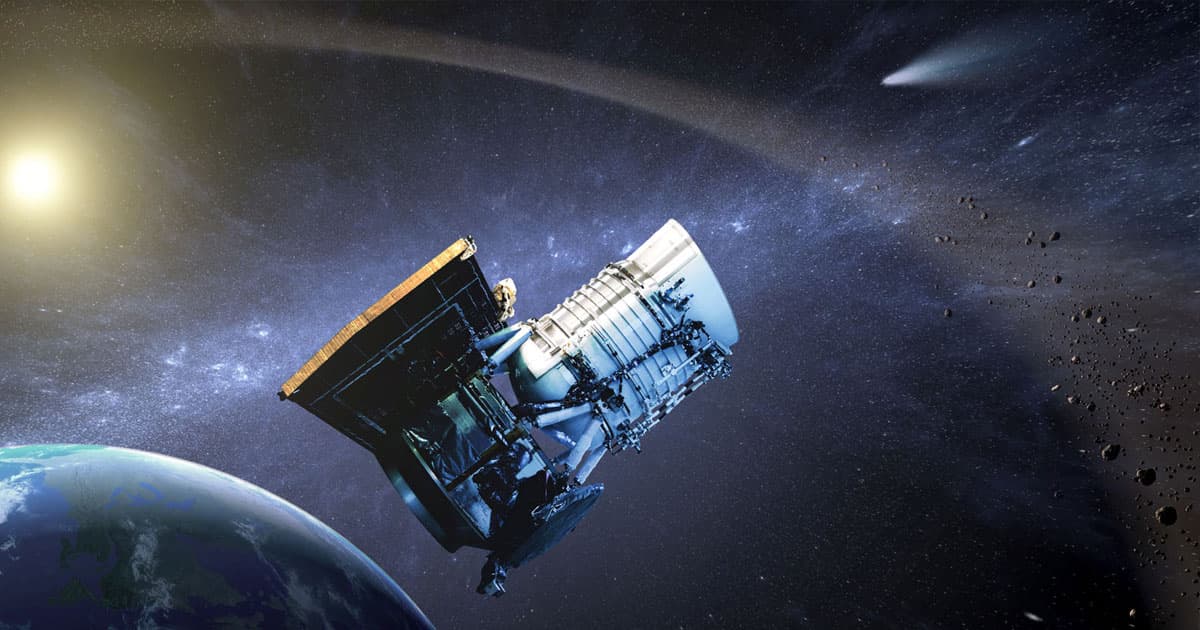 Comet C/2020 F3 — better known as NEOWISE, for the Near Earth Object Wide-field Infrared Survey Explorer telescope that first discovered it — has came so close to Earth over the weekend that it's visible to the naked eye, blazing brightly over Northern skies. The rare event was captured on camera by amateurs and professionals alike from around the globe — and the results are dazzling.

For instance, just check out this short video from the International Space Station.

The space rock was about 194 million miles from the Sun when first discovered in March, making it far too faint to see with the naked eye. But over the last few months, the comet has become far brighter as it's approached.

this morning looking north over Lake Superior as the comet skimmed the horizon a little over 1°, the aurora made a brief appearance #comet #neowise pic.twitter.com/ryKiLsE1SX

On July 3, it was only 27.3 million miles (44 million km) from the Sun. To put that into perspective, the closest flyby of the Sun by an artificial object was NASA's Parker Solar Probe back in January, passing by our star at a mere 18.7 million kilometers.

In fact, the solar probe was able to get its own look at the comet on July 5, according to NASA.

Astronomers were concerned the comet would not survive such a close encounter, but as evidenced by this weekend's sightings, it seems to be doing fine.

Its "tail" or "coma" is extremely visible, making it stand out against its predecessors, ATLAS and SWAN, as Space.com reports, which only had very faint paths of condensed heat following their paths.

While astronomers discover hundreds of comets every single year, every once in a while a "great" comet passes by our planet and appears considerably brighter. According to Space.com, the last comet that was of a comparable brightness was Comet Hale-Bopp in 1997.

What an awe inspiring experience. A celestial visitor that has been around since the beginning of our universe. What stories it could tell, what sights it has beheld. How this cosmic being has brought humankind together. Regardless of race, color, sex, creed, age, profession, or any other distinguishing characteristics, we cannot help but gaze towards the heavens and become lost in its beauty. Take a minute to forget everything else going on right now. Just breathe, feel, love. We are all one world, never forget that. . . . Shot on the @sonyalpha A7RIV with the @sigmaphoto 105mm f/1.4 and 50mm f/1.4 Art lenses. . . #lestertsaiphotography #neowise #cometneowise #discoverwithalpha #sonyalpha #sonya7riv #sigmaart #mykgw #bbcearth #nationalgeographic #koin6news #fox12news #pnwphotographer #mthoodterritory #oregonexplored #pnwisbeautiful #pnwonderland #pnwadventurers #mthood #pnwphotography #portlandphotographer #pdxphotographer #pdxphotography #portlandphotography #comet #nightsky #myplanetdaily #earthfocus #keepportlandweird

READ MORE: Comet NEOWISE could give skywatchers a dazzling show this month. Here's what to know. [Space.com]

More on comets: NASA: Something Is Off About This Interstellar Comet

Read This Next
Futurism
The White House Now Has a Plan for Handling an Asteroid Disaster
Futurism
Newfound Comets to Help Ring in the New Year
Futurism
Scientists Find Comet Releases as Much Alcohol as 500 Bottles of Wine
Futurism
Uncovering the Formation (and Extinction) of Life on Earth
Futurism
Size Comparisons of the Largest Objects in the Known Universe
More on Hard Science
Warped Tour
Feb 2 on futurism
Professor Believes Door to Warp Drive May Lie With Ethylene Glycol
Sky Bursts
Feb 2 on the byte
Astronomers Intrigued by 25 Mysterious Repeating Radio Signals From Deep Space
Tractor Beam
Jan 26 on the byte
Scientists Build Working Tractor Beam, Although It's Comically Tiny
READ MORE STORIES ABOUT / Hard Science
Keep up.
Subscribe to our daily newsletter to keep in touch with the subjects shaping our future.
+Social+Newsletter
TopicsAbout UsContact Us
Copyright ©, Camden Media Inc All Rights Reserved. See our User Agreement, Privacy Policy and Data Use Policy. The material on this site may not be reproduced, distributed, transmitted, cached or otherwise used, except with prior written permission of Futurism. Articles may contain affiliate links which enable us to share in the revenue of any purchases made.
Fonts by Typekit and Monotype.