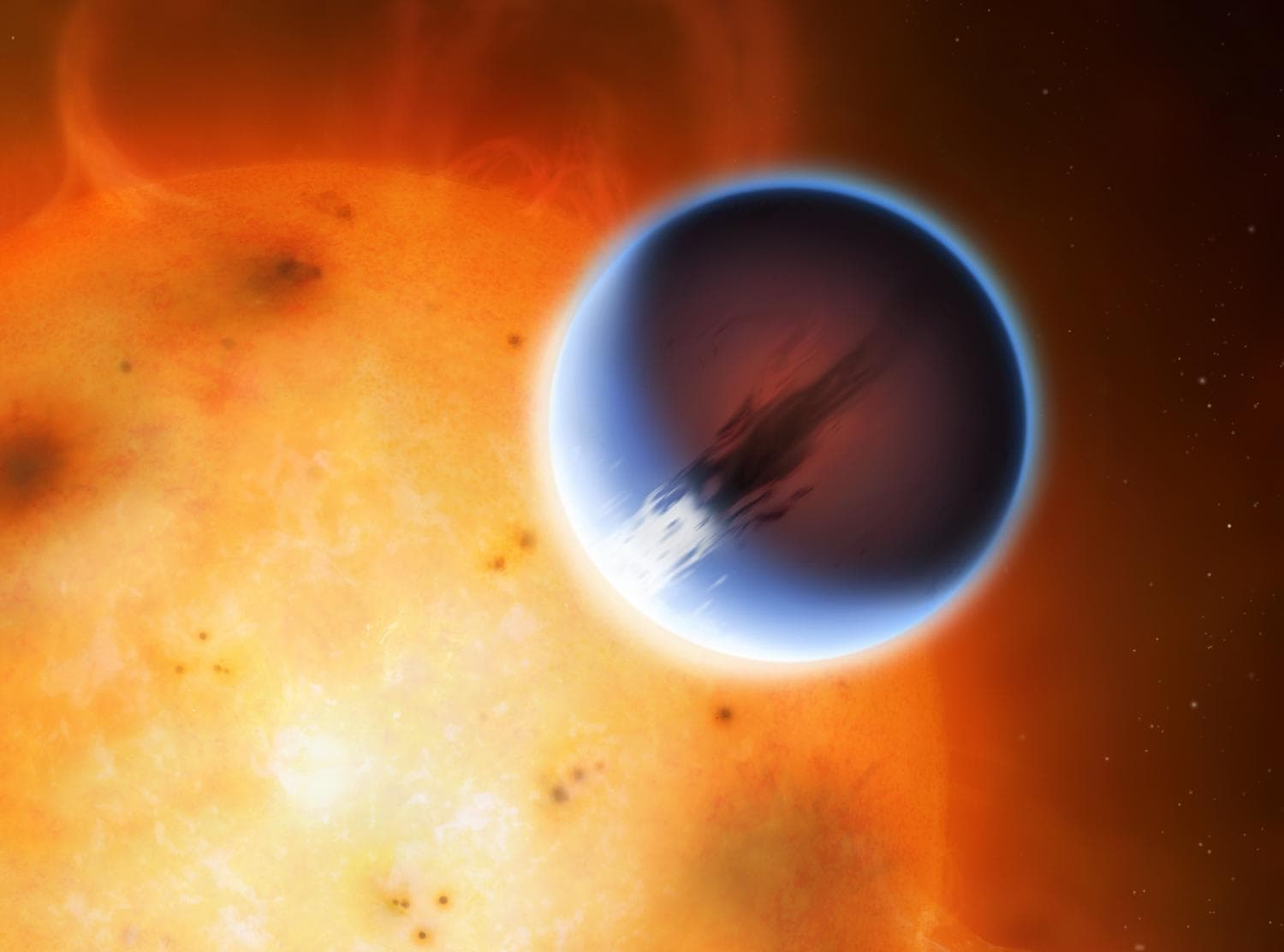 Image by University of Warwick

Earlier this week, scientists announced the discovery of a planet that has wind speeds that are 20 times greater than the fastest speeds ever recorded on Earth. The planet is HD 189733b. It's wind reaches an amazing 8,600 km/h (5,400 mph), which equals out to just about 2 kilometers a second  (1.2 mi/sec). To give you an idea of how fast this it, it would break the sound barrier on Earth. However, notably, on the planet itself, since the bulk motion of the atmosphere is still moving in unison, you wouldn't hear constant sonic booms.

Ultimately, this marks the first time that scientists have managed to directly measure and map a weather system on a planet outside our solar system. So, how does weather on this planet compare to some of the winds we've seen in our own solar system?

In 2005, hurricane Katrina struck the coasts of Mississippi and Louisiana. It was one of the deadliest and costliest storms in U.S. history. The hurricane made landfall with wind speeds topping at 201 km/h (125 mph). For Earth, this was a storm of unprecedented proportions; however, it doesn't even come close to what we see on HD 189733b.

So let's take a look at Jupiter's Great Red Spot, as this is the largest storm in our solar system. It's so big that it could swallow two and a half Earths. Wind speeds around the edge of this beast reach 400 km/h (250 mph). If you’re a wind surfer, this velocity might sound enticing. But consider your arms, legs, and head flailing about sporadically, flapping like a flag in the wind. Not so fun.

Tom Louden, of the University of Warwick's Astrophysics group, which is the team behind the find, notes that the discovery was made using spectroscopy. In short, spectroscopy is the study of how light and matter interact. By measuring how much the waves of light are shifted, we can determine how fast things are moving.

Louden explains, "HD 189733b's velocity was measured using high resolution spectroscopy of the Sodium absorption featured in its atmosphere. As parts of HD 189733b's atmosphere move towards or away from the Earth the Doppler effect changes the wavelength of this feature, which allows the velocity to be measured."

And he continues, ""The surface of the star is brighter at the centre than it is at the edge, so as the planet moves in front of the star the relative amount of light blocked by different parts of the atmosphere changes. For the first time we've used this information to measure the velocities on opposite sides of the planet independently, which gives us our velocity map."

Scientists hope that this technique could be used to help us better understand the weather features on more Earth-like planets.

Read This Next
Futurism
New Research Shows Mars Experiences Violent Snowstorms
Futurism
The Kepler Spacecraft Has Been Brought Back From the Dead
Futurism
Largest Solar System Ever Discovered: Planet Takes A Million Years to Complete One Orbit
More on Off World
No More Hops, Mor...
Yesterday on the byte
Suggestion: NASA Should Make Its Mars Helicopter Do Some Gnarly Tricks From "Tony Hawk"
Exoplanet Dance
Tuesday on the byte
Scientist Releases Amazing Video of Exoplanets Orbiting Distant Star
Space Junk News
Tuesday on the byte
Two Large Chunks of Space Debris Just Almost Collided in an Epic Disaster
READ MORE STORIES ABOUT / Off World
Keep up.
Subscribe to our daily newsletter to keep in touch with the subjects shaping our future.
+Social+Newsletter
TopicsAbout UsContact Us
Copyright ©, Camden Media Inc All Rights Reserved. See our User Agreement, Privacy Policy and Data Use Policy. The material on this site may not be reproduced, distributed, transmitted, cached or otherwise used, except with prior written permission of Futurism. Articles may contain affiliate links which enable us to share in the revenue of any purchases made.
Fonts by Typekit and Monotype.