AI Dreamed Up a Bizarre Nightmare Creature That Doesn't Actually Exist... We Hope

What IS that thing??? 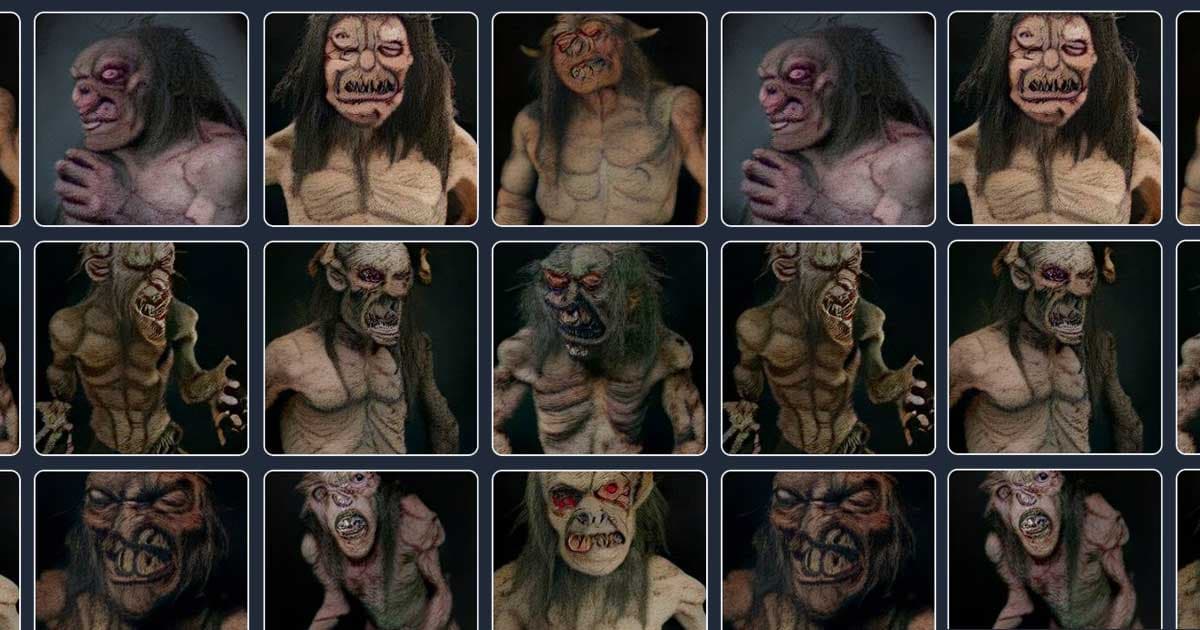 Straight from the depths of AI hell hails Crungus — or somewhere like that, because until a few days ago, nobody knew this thing existed.

The monstrosity known only by his meme-y sounding name appears to have been birthed into this plane by Twitch streamer and voice actor Guy Kelly. Over the weekend, Kelly posted a screenshot of a DALL-E Mini — now known as Craiyon — prompt featuring the word "Crungus," along with its abominable results.

Well I REALLY don't like how similar all these pictures of "Crungus", a made up word I made up.

Why are they all the same man? Is the Crungus real? Have I discovered a secret cryptid? pic.twitter.com/KCNUOxPHnP

Though Urban Dictionary has a few definitions of the term "Crungus," most of which have to do with the detritus that builds up under one's fingernails and other horrible places, there weren't any Google results for the term that came up with anything that looked even remotely like the monster that Craiyon dreamed up.

As Kelly notes, the term is nothing more than a "word I made up" — which makes the horrific results legitimately puzzling, not to mention a bit eerie.

"Seriously though," the streamer wrote in his thread. "I can't find anything remotely like this on Google. And they are all SO similar. Is this real now because of me? Do the government have a Crungus and the AI knows??"

As Kelly continued, perhaps "the worst thing" about the story is that he actually came up with the term "Crungus" in the middle of the night and fed it into the image generator, but didn't check the results until he woke up later that morning.

In the replies to Kelly's tweets, one user noted that there appears to be another cryptid named Crungus "that mysteriously turned up in the game 'Carnivores Ice Age' in a Discord meme which started a couple of years ago."

As the same user noted, the meme appears to show a "Cacodaemon" from the "DOOM" franchise that, somehow, was brought into the game.

"It may be that the AI is riffing off this particular meme," they continued, "hence the rather demonic looking images."

Indeed, in a YouTube video from March 2020, a streamer who goes under the username Jvirus posted about a strange sighting in the "Carnivores" game that, per their amateurly-edited retelling, supposedly appeared when they were playing the game.

Though the "Crungus" meme does indeed appear on a "Carnivores" Reddit fan page, the goofy tomato-colored Cacodemon looks very different from the gray-brown Crungus.

While subsequent search for "Cacodaemon" produced some promising results from both Greek and "DOOM" mythologies, these relatively obscure types of demons don't generally come up when one Googles "Crungus," which could mean the AI itself made some sort of connection between the concepts.

Or alternately, maybe in some difficult-to-pin-down way, the word "Crungus" just evokes, to the Craiyon model, a certain type of nasty creature. As with much advanced AI, it can be hard to say for sure.

Meanwhile, back on Twitter, Crungus has become something of a mini-celebrity, with at least one parody account in which the hobgoblin remarks on its Summer Solstice celebrations and gets an animated makeover.

In the ensuing days, Chungus' origins were predicted by another AI and the demon appeared to crash IFLScience's website when that site was writing up its terrifying tale.

But we're still no closer to understanding what exactly Chungus is, or why Craiyon generates it so consistently with so little apparent background information.

In an interview with IFLScience, the streamer who introduced the world to this C-Lister demon offered a possible explanation for its existence.

"Crungus is a creature that has always existed in a world slightly adjacent to ours," Kelly said, "and through humanity's hubris in attempting to create a thinking machine, we've pierced the veil between worlds and invited something in that can never be sent away."

In that case, God help us all.

READ MORE: Nothing To Worry About: Dall-E Has Created A New Cryptid Named Crungus [IFLScience]

More on DALL-E Mini: That AI Image Generator Is Spitting Out Some Awfully Racist Stuff