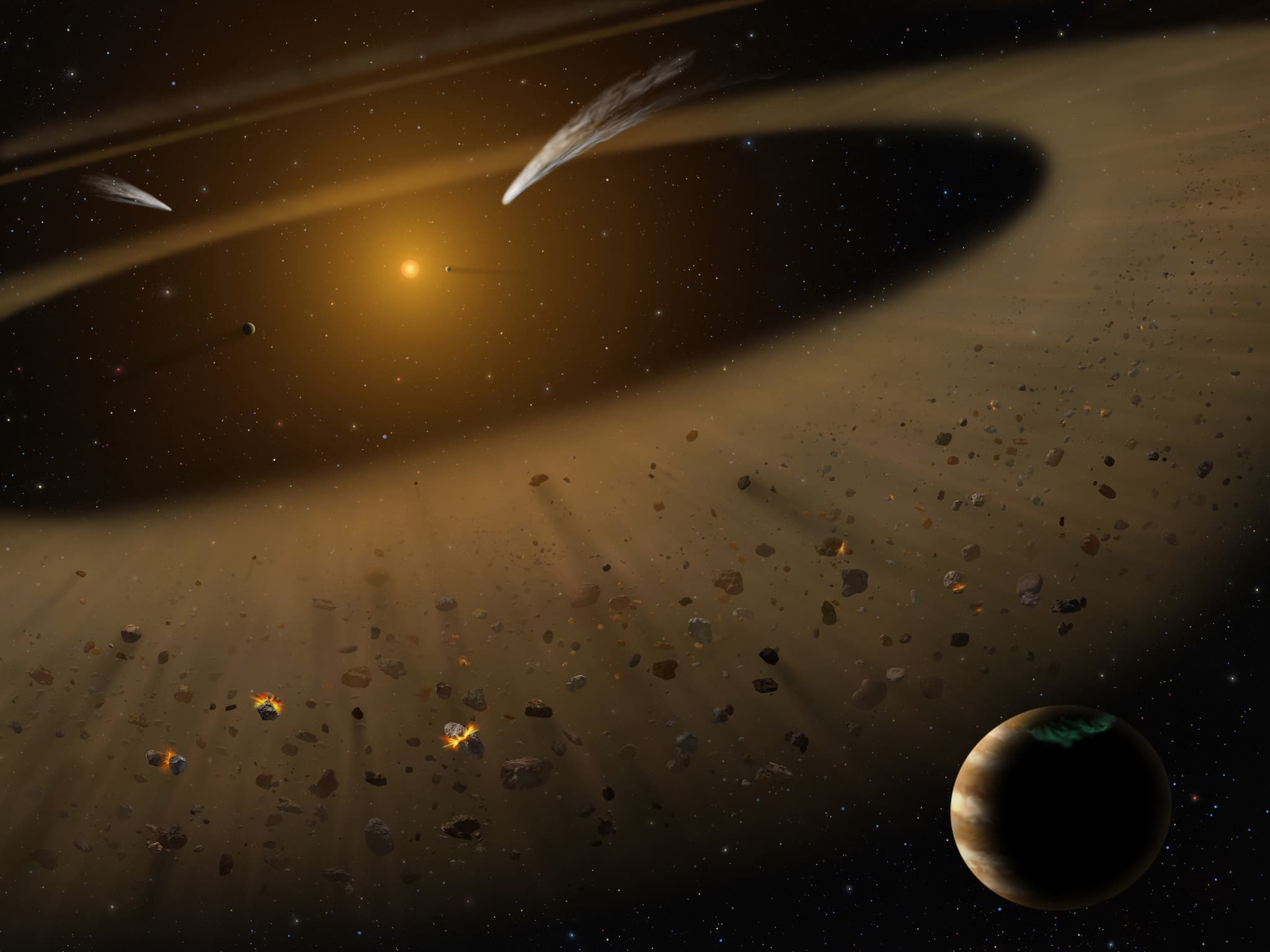 Astronomers are understandably fascinated with the Epsilon Eridani system. For one, this star system is in close proximity to our own, at a distance of about 10.5 light-years from the Solar System. Second, it has been known for some time that it contains two asteroid belts and a large debris disk. And third, astronomers have suspected for many years that this star may also have a system of planets.

On top of all that, a new study by a team of astronomers has indicated that Epsilon Eridani may be what our own Solar System was like during its younger days. Relying on NASA’s Stratospheric Observatory for Infrared Astronomy (SOFIA) aircraft, the team conducted a detailed analysis of the system that showed how it has an architecture remarkably similar to what astronomer believe the Solar System once looked like.

For the sake of their study – the results of which were published in The Astronomical Journal under the title “The Inner 25 AU Debris Distribution in the Epsilon Eri System” – the team relied on data obtained by a flight of SOFIA in January 2015. Combined with detailed computer modeling and research that went on for years, they were able to make new determinations about the structure of the debris disk.

As already noted, previous studies of Epsilon Eridani indicated that the system is surrounded by rings made up of materials that are basically leftovers from the process of planetary formation. Such rings consist of gas and dust, and are believed to contain many small rocky and icy bodies as well — like the Solar System’s own Kuiper Belt, which orbits our Sun beyond Neptune.

Careful measurements of the disk’s motion has also indicated that a planet with nearly the same mass as Jupiter circles the star at a distance comparable to Jupiter’s distance from the Sun. However, based on prior data obtained by the NASA’s Spitzer Space Telescope, scientists were unable to determine the position of warm material within the disk — i.e. the dust and gas — which gave rise to two models.

In one, warm material is concentrated into two narrow rings of debris that orbit the star at distances corresponding respectively to the Main Asteroid Belt and Uranus in our Solar System. According to this model, the largest planet in the system would likely be associated with an adjacent debris belt. In the other, warm material is in a broad disk, is not concentrated into asteroid belt-like rings, and is not associated with any planets in the inner region.

Using the new SOFIA images, Su and her team were able to determine that the warm material around Epsilon Eridani is arranged like the first model suggests. In essence, it is in at least one narrow belt, rather than in a broad continuous disk. As Su explained in a NASA press release:

“The high spatial resolution of SOFIA combined with the unique wavelength coverage and impressive dynamic range of the FORCAST camera allowed us to resolve the warm emission around eps Eri, confirming the model that located the warm material near the Jovian planet’s orbit. Furthermore, a planetary mass object is needed to stop the sheet of dust from the outer zone, similar to Neptune’s role in our solar system. It really is impressive how eps Eri, a much younger version of our solar system, is put together like ours.”

These observations were made possible thanks to SOFIA’s on-board telescopes, which have a greater diameter than Spitzer – 2.5 meters (100 inches) compared to Spitzer’s 0.85 m (33.5 inches). This allowed for far greater resolution, which the team used to discern details within the Epsilon Eridani system that were three times smaller than what had been observed using the Spitzer data.

In addition, the team made use of SOFIA’s powerful mid-infrared camera – the Faint Object infraRed CAmera for the SOFIA Telescope (FORCAST). This instrument allowed the team to study the strongest infrared emissions coming from the warm material around the star which are otherwise undetectable by ground-based observatories – at wavelengths between 25-40 microns.

These observations further indicate that the Epsilon Eridani system is much like our own, albeit in younger form. In addition to having asteroid belts and a debris disk that is similar to our Main Belt and Kuiper Belt, it appears that it likely has more planets waiting to be found within the spaces between. As such, the study of this system could help astronomers to learn things about the history of our own Solar System.

Massimo Marengo, one of he co-authors of the study, is an Associate Professor with the Department of Physics & Astronomy at Iowa State University. As he explained in a University of Iowa press release:

“This star hosts a planetary system currently undergoing the same cataclysmic processes that happened to the solar system in its youth, at the time in which the moon gained most of its craters, Earth acquired the water in its oceans, and the conditions favorable for life on our planet were set.”

At the moment, more studies will need to be conducted on this neighboring stars system in order to learn more about its structure and confirm the existence of more planets. And it is expected that the deployment of next-generation instruments – like the James Webb Space Telescope, scheduled for launch in October of 2018 – will be extremely helpful in that regard.

“The prize at the end of this road is to understand the true structure of Epsilon Eridani’s out-of-this-world disk, and its interactions with the cohort of planets likely inhabiting its system,” Marengo wrote in a newsletter about the project. “SOFIA, by its unique ability of capturing infrared light in the dry stratospheric sky, is the closest we have to a time machine, revealing a glimpse of Earth’s ancient past by observing the present of a nearby young sun.”

Read This Next
Horrible Geese
Furious Geese Are Defeating Humans, Scientists Find
Quacks Like a Duck
Those Headlines About Scientists Building a Wormhole Are Total Nonsense, People
Falling In
Objects We Thought Were Black Holes May Actually Be Wormholes, Scientists Say
Bangs and Bounces
Scientists Say Stuff Might Have Been Happening Before the Big Bang
Clusterf***
There's Something Strange About How These Stars Are Moving, Scientists Say
More on Hard Science
It From Bit
Nov 22 on the byte
A Scientist Is Crowdfunding an Experiment to Check if We Live in a Simulation
Water Carrying
Nov 20 on the byte
Evidence Grows That Soggy Meteorites Gave Earth Its Oceans
Shroom News
Nov 20 on the byte
Scientists Build Circuit Boards Based on Mushrooms
READ MORE STORIES ABOUT / Hard Science
Keep up.
Subscribe to our daily newsletter to keep in touch with the subjects shaping our future.
+Social+Newsletter
TopicsAbout UsContact Us
Copyright ©, Camden Media Inc All Rights Reserved. See our User Agreement, Privacy Policy and Data Use Policy. The material on this site may not be reproduced, distributed, transmitted, cached or otherwise used, except with prior written permission of Futurism. Articles may contain affiliate links which enable us to share in the revenue of any purchases made.
Fonts by Typekit and Monotype.