5 Nintendo Space Games That Are Out of This World

Explore the cosmos, hunt aliens, or enter an intergalactic Grand Prix with these great titles. 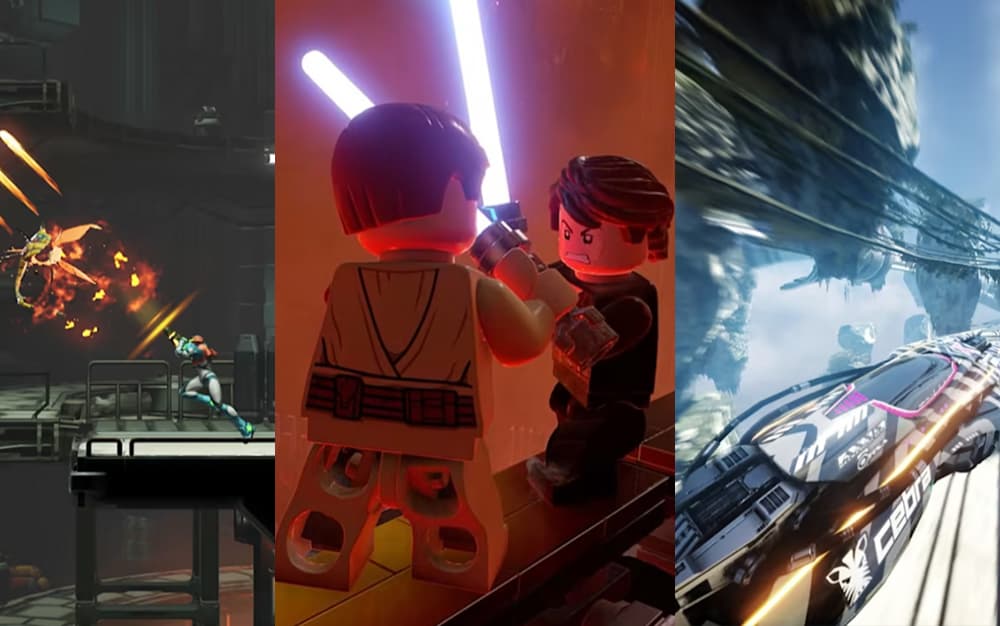 Ever since “Space Invaders” took over arcades on two continents back in 1978, space has been the backdrop for games big and small. The Nintendo Switch hosts tons of great space games that span tons of genres, from action-packed cinematic adventures to cozy exploration sims. And because they’re on the Switch, you can experience the glory of the stars anywhere. Here’s a selection of our favorite picks.

Key Selling Point: A new Metroid adventure that combines the glorious gameplay of the past, with modern, breathtaking visuals.

This space game isn’t simply a great entry in the popular Metroid series, it’s also the stuff of legend. “Metroid Dread” was rumored to be in the works way back as far as 2005, but its status in development purgatory lasted more than fifteen years. It was more than worth the wait, especially because the game plays much like a classic Metroid, 2D plane and all. That doesn’t mean the graphics aren’t amazing and immersive, complete with some seriously dreadful stealth segments. Whether you’re a Samus Aran fanatic or new to hunting brain-sucking aliens, “Metroid Dread” isn’t just a great space game on Switch, it's one of the console's best games period.

Key Selling Point: Some of the best sci-fi RPG storytelling, with plenty of replay value.

I forget who said it, but space truly is “the final frontier.” When you consider how vast it is, it’s also ripe for exploration and colonization. In “Outer Worlds” you are one such explorer, who wakes up on the edge of the interstellar frontier. Like any great RPG, you make choices building different abilities, fighting enemies head-on or developing stealthier paths to victory, and even develop technical prowess in the fields of science, medicine, and engineering. A story unfolds as you explore and grow, but what happens totally depends on you. If you’re looking for story-rich gameplay across some seriously scenic sci-fi backdrops, “Outer Worlds” can’t be beat.

There are games, and then there are pop culture phenomena like “Minecraft” and “Among Us.” Despite its lo-fi visual presentation, there are perhaps few modern titles that can rile up distrust and dread this side of “Mario Party.” You play as one of four to 15 astronauts on a spaceship, and wouldn’t you know it, there’s an infiltrator in your midst looking to sabotage the mission. Everyone is assigned roles at the start of the game, and everyone playing must uncover who is good, and who is a nasty saboteur. Periodically, everyone playing gets to vote on who to eject into space until either all imposters are dealt with, or the imposters take over. Simple gameplay pairs with real-life negotiating with your friends and family, for a game that’s addictive, and pardon the pun, universally good.

Key Selling Point: No, it’s not an F-Zero game, but it certainly smacks of one.

Samus Aran made her illustrious return with “Metroid Dread,” but it’s unlikely Nintendo will be making a new F-Zero game anytime soon. Captain Falcon will be relegated to memes and Super Smash Bros. games from now until the sun goes supernova. Luckily, the F-Zero racing series has its fans in the world of game development, which is where “Fast RMX” comes in. The same unfathomably fast action-packed racing you love from the F-Zero series can be found in “Fast RMX,” with tracks in futuristic cities, deserts, and even jungles. No, Captain Falcon and company aren’t here, but if you squit, the same racing goodness from the long-forgotten series can be had here, and at an affordable price no less. It’s got both local and online play to boot.

Key Selling Point: Play through Episodes I through IX, as any hero or villain from the “Star Wars” film series.

Compiling a list of great Nintendo Switch space games requires at least one game with “Star Wars” in the title. The latest LEGO “Star Wars” game may also be one of the best entries yet, and compiles all nine mainline “Star Wars” adventures in one, spanning “The Phantom Menace” all the way to “The Rise of Skywalker.” Better yet, because everything is LEGO, these adventures will feel new again, with cutscenes in between levels that are equal parts hilarious and adorable. Attack the Death Star, explore the jungles of Endor, and play as just about every hero (or villain) from the film series. That’s right, even Salacious B. Crumb. Play alone, or bring a few friends along with its seriously stellar multiplayer.