Proof of a New Geological Epoch: Over 200 Minerals Have Been Created by Humans

If you doubt were on the cusp of a new, human-influenced geological epoch, the Anthropocene, here’s some rock-solid evidence: Researchers have noted that 208 of the 5,208 minerals found on the surface of the planet would not exist if not for human activity.

According to the researchers’ findings, the diversification of crystal on Earth that was brought on during the Industrial Revolution was even bigger than the Great Oxidation event that took place 2.2 billion years ago — a phenomenon that saw the variety of minerals on Earth’s surface double.

“This is a spike of mineral novelty that is so rapid — most of it in the last 200 years, compared to the 4.5-billion-year history of Earth. There is nothing like it in Earth’s history,” lead researcher, Robert Hazen of the Carnegie Institution of Washington’s Geophysical Laboratory, told The Guardian.

Many of the 208 minerals noted by the researchers may have formed naturally, but they were found in man-made places.

While some were triggered by mining activities and found in man-made mines and mine walls, others were found under the sea at the site of shipwrecks or on ancient Egyptian bronze artifacts. The researchers believe new minerals could also be forming in waste dumps, possibly caused by old batteries and electrical appliances. The 208 figure doesn’t even include new minerals that were consciously synthesized by humans, such as the ones used as electronic components or synthesized gems.

“Mineral evolution has continued throughout Earth’s history. It has taken 4.5 billion years for combinations of elements to meet naturally on Earth at a specific location, depth and temperature, and to form into the more than 5,200 minerals officially recognized today,” explained Hazen in a press release. “The majority of these have arisen since the Great Oxidation event 2 billion years ago.” 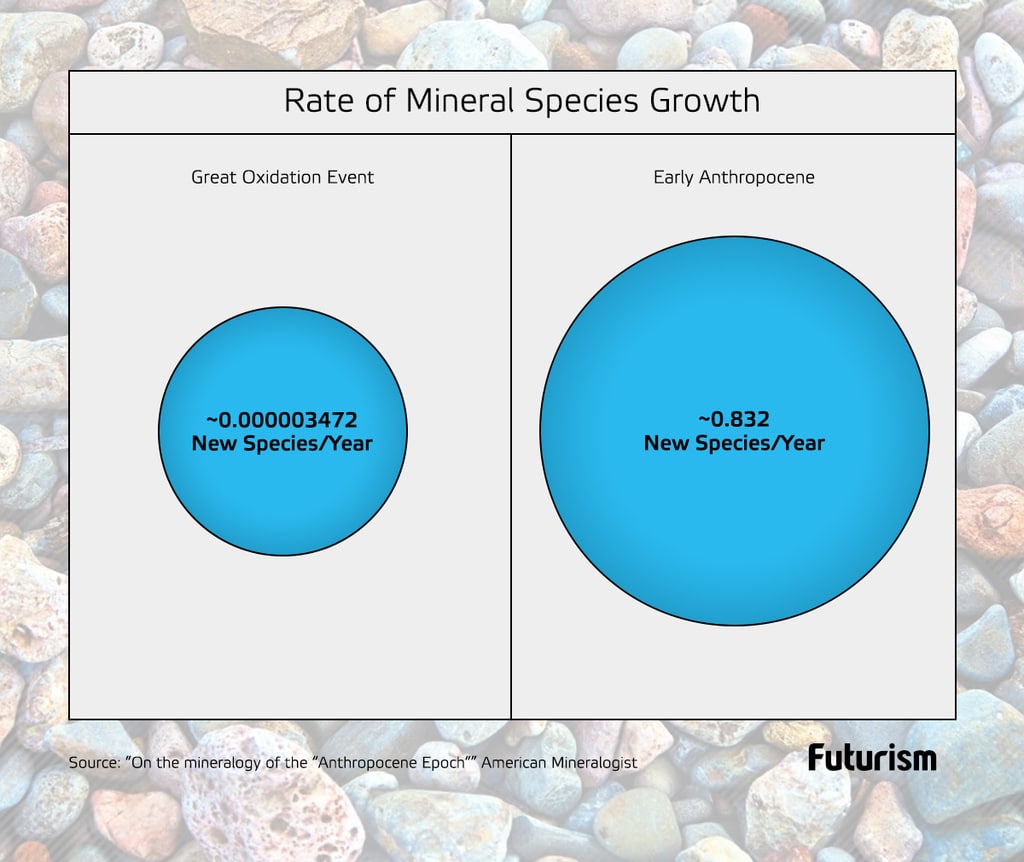 During the Great Oxidation event, mineral varieties increased from 2,000 to more than 4,000. That accounts for more than two-thirds of the minerals we know today, but that event happened gradually, over the course of two billion years. That rate is extremely slow compared to the explosion of mineral diversity we saw in the last 250 years, which is believed to be the fastest rate of mineral production the Earth has ever seen.

“To imagine 250 years relative to 2 billion years, that’s the difference between the blink of an eye … and one month […] Simply put, we live in an era of unparalleled inorganic compound diversification. Indeed, if the Great Oxidation eons ago was a ‘punctuation event’ in Earth’s history, the rapid and extensive geological impact of the Anthropocene is an exclamation mark,” Hazen adds.

Scientists May Have Discovered the ‘Trigger’ for Complex Life on Earth

The North Pole Is Moving, And Now We Know What’s Causing It—Us