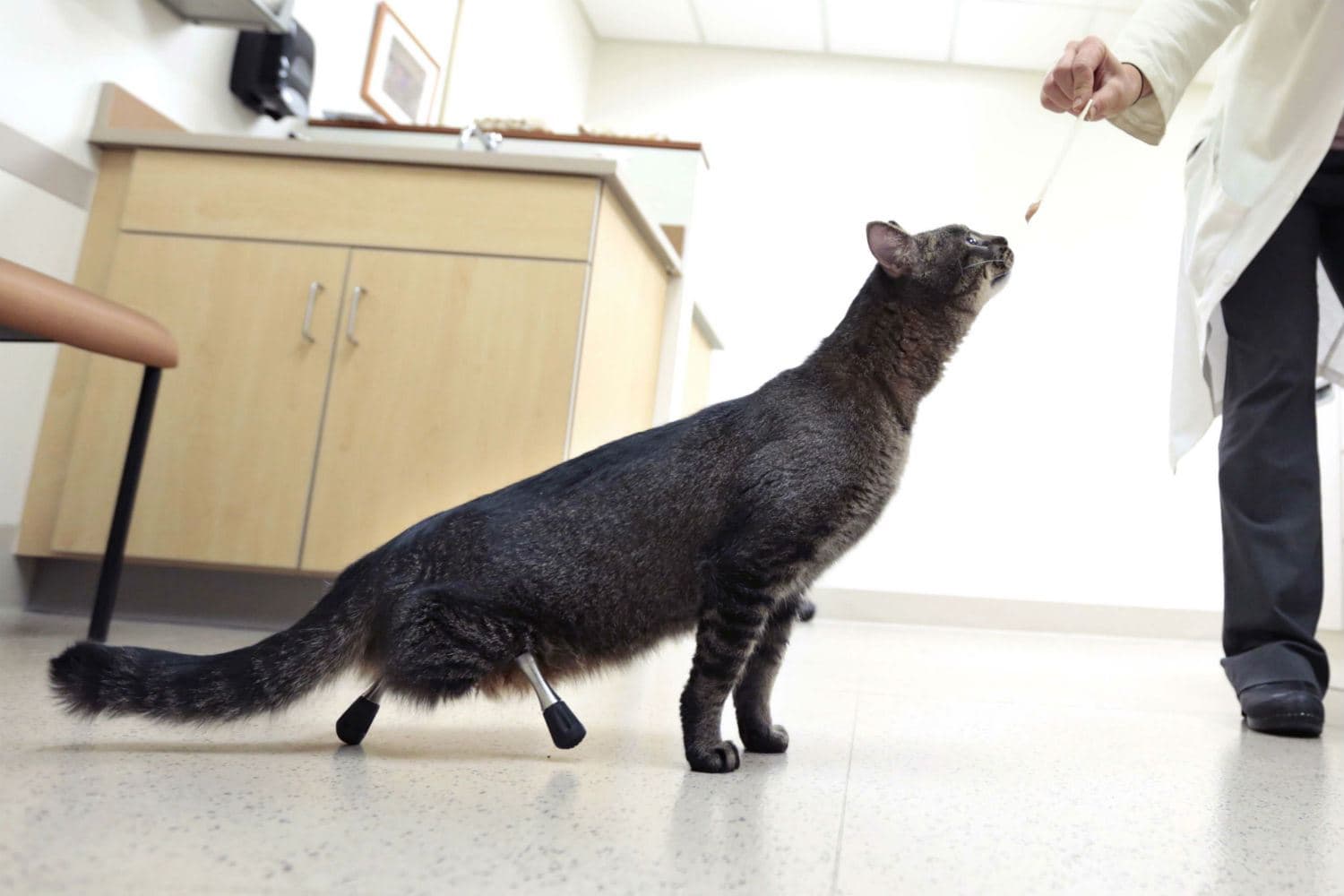 Vincent is a 3-year-old shorthaired cat that was found as a kitten without hind legs. But now he has a new way to get around, thanks to prosthetic titanium-alloy hind legs that he received at Iowa State. Researchers at the university built the cat a pair of usable legs using 3D modeling and printing.

“I anticipate that he’ll be jumping and doing really normal cat things very soon,” Dr. Mary Sarah Bergh, the surgeon who attached Vincent’s prosthetic legs and has overseen his rehabilitation, said in a press release.

Bergh is an associate professor of orthopedic surgery in the ISU Department of Veterinary Clinical Sciences. She estimated that only a couple dozen animals in the world have received the sort of prosthetics that Vincent now has. Unfortunately, this tends to make things more difficult on Vincent. Since there is so little data available, it hasn’t been easy to guide him in his rehabilitation.

But overall, Vincent’s recovery shows remarkable progress, and it is a testament to the innovation of veterinary medicine and the dedication and love of his owner.

Vincent was a tiny kitten when he was found at a campground. His hind legs were severely injured, and he was brought to the Story County Animal Shelter. Cindy Jones, of rural Nevada, saw him there and decided to take him home. Her daughter, who attends veterinary school, was the one who suggested that Bergh might be able to help.

Bergh first tried physical therapy with Vincent but realized early on that endoprosthetics represented the best chance at a normal life for the cat. His implants require special care, such as an antibiotic spray daily to prevent infections.

A veterinary orthopedics company called BioMedtrix donated time and materials for the project. The implants are titanium shafts that allow bone to grow on them. Vincent will have additional treatments to gradually lengthen the prosthetics, so that, one day, they’ll be as long as a normal cat’s hind limbs. At that point, he should be able to get around with little difficulty – even if he wants to try jumping.

Bergh called this kind of procedure an “emerging field” that’s rare in veterinary medicine, and it should shed light on similar cases in the future.

Read This Next
Brands We Love
This Cutting Edge DNA Test Lets You Better Understand Your Weird-Ass Cat
Futurism
Retinal Implants Could Restore Sight to More Than 2 Million People
Futurism
World First: Ultrasound Used to "Jump-Start" Patient's Brain out of a Coma
Futurism
Scientists May Have Found a Way to Treat Urinary Tract Infection Without Antibiotics
Futurism
FDA Approved Device Uses Ultrasound Instead of A Knife
More on Hard Science
Tractor Beam
Thursday on the byte
Scientists Build Working Tractor Beam, Although It's Comically Tiny
Having a Blast
Jan 18 on the byte
New Study Shows Where You Should Hide to Survive a Nuclear Attack
Offworld Amino
Jan 15 on the byte
Scientists Find Building Blocks of Life in Meteor That Smashed Into Family's Driveway
READ MORE STORIES ABOUT / Hard Science
Keep up.
Subscribe to our daily newsletter to keep in touch with the subjects shaping our future.
+Social+Newsletter
TopicsAbout UsContact Us
Copyright ©, Camden Media Inc All Rights Reserved. See our User Agreement, Privacy Policy and Data Use Policy. The material on this site may not be reproduced, distributed, transmitted, cached or otherwise used, except with prior written permission of Futurism. Articles may contain affiliate links which enable us to share in the revenue of any purchases made.
Fonts by Typekit and Monotype.