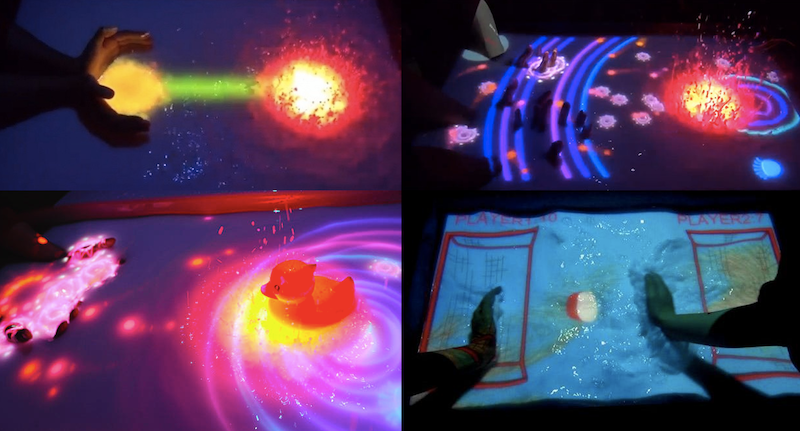 Have you ever been bored in the bathtub? One solution is, of course, to get out and go do something else. Another is to turn your water into a touchscreen (touchwater?) gaming system.

At least, it could be.

The AquaTop Display is an interactive water surface that allows you to treat water just like you would a touchscreen. You can place your hands on top of the water, dip them down in, or even totally submerge your hands for a truly immersive experience (pun totally intended).

Initially unveiled in 2013, the technology was developed by the Koike Laboratory at the University of Electro-Communications in Tokyo.

The technology was just a prototype meant to demonstrate the viability of the device, so you won't be able to actually purchase one from your local Walmart. However, this idea is quite simple, so with enough know-how and the right materials, you could likely make one for yourself and fine tune it to do nearly anything you desire.

The team asserts that milky water can be used as a projection surface. The cloudier the surface, the clearer the projected images. In this respect, the Aquatop Display can be recreated with a depth camera (for example, something like a Microsoft Kinect) and a standard projector. Of course, you will also need milky water, but this is easily attained. Your clouding agent can be nearly any bath soap that you find in your local convenience store.

Of course, you will also have to have advanced knowledge of coding (or friends that do).

In the video below, the researchers demonstrate a multiplayer shooting game that lets users explode enemy targets using "bullets" of light. You are able to make and move the ammo through a series of gestures. A submerged waterproof speaker adds to the experience by dispersing sound waves as a bright LED display. It produces sound at the 50 Hz frequency, and the water shoots upwards in a fountain along with the integrated lights.

It also shows how you can close out windows, magnify images, and do a host of other things with the device.

As was previously noted, the technology was unveiled back in 2013 (over two years ago), and it seems that there isn't exactly a commercial market for this kind of device. First, it isn't terribly portable. It is far easier to pick up your phone and play a game. Second, other gaming systems are already miles ahead of this device, so it would have a lot of catching up to do. Third, although it is neat, the novelty would eventually wear off and individuals would soon get sick of having to get wet anytime they want to use the technology.

Still, the prototype shows interesting ways that technology can be incorporated into other aspects of our lives and the innovative things that can be created by thinking outside the box. Also, it just looks really cool.