This Engineering Marvel Functions as Both a Bridge and a Tunnel

The Chesapeake Bay Bridge-Tunnel is one of only 10 bridge-tunnel systems in the world. 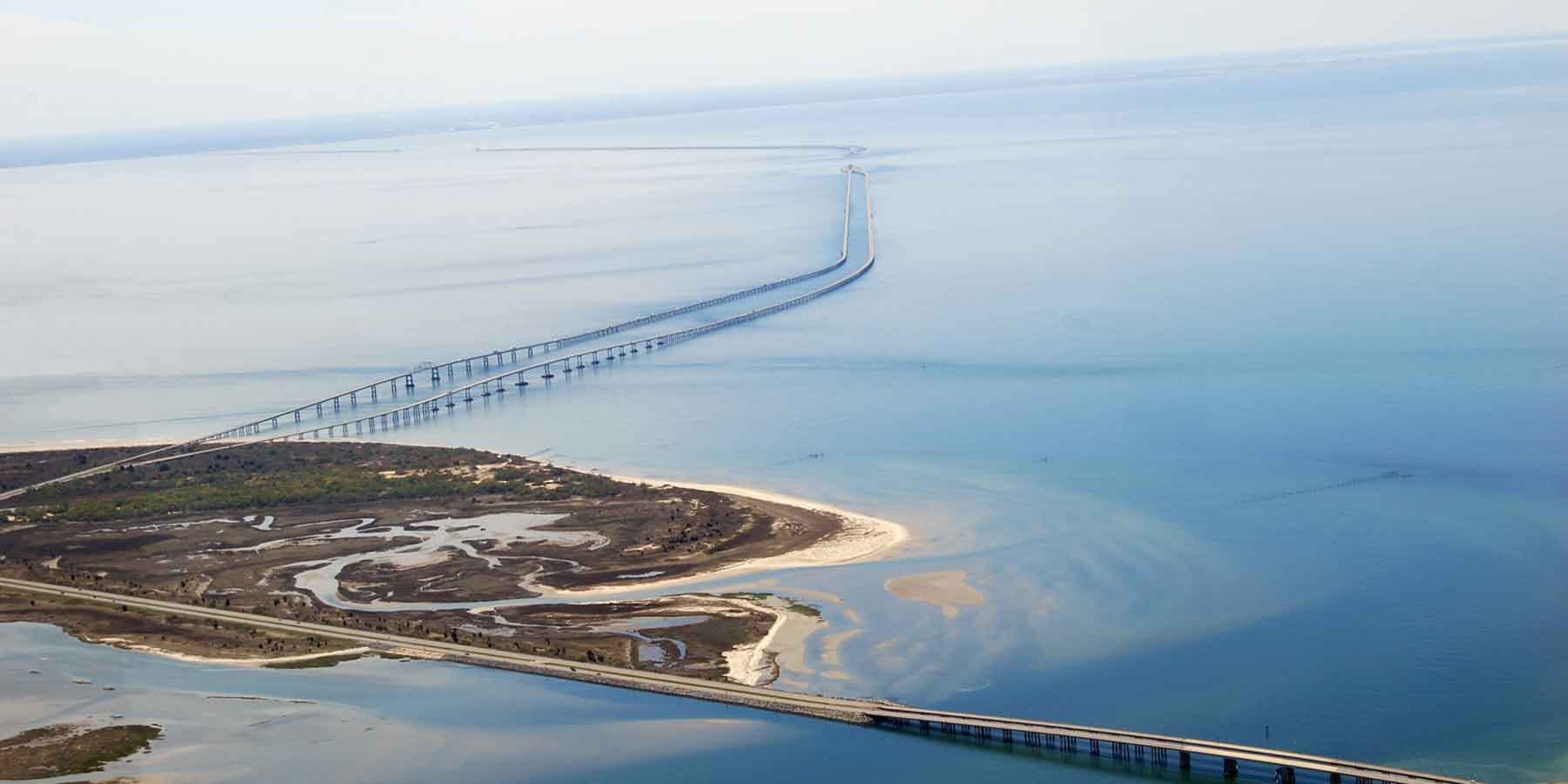 If you plan to travel down Virginia's Eastern Shore to get to the beach this summer, you might drive over the Chesapeake Bay Bridge-Tunnel. As its name implies, the structure functions as both a bridge and a tunnel.

After the $200 million structure's completion in 1964, the American Society of Civil Engineers named it "one of the seven engineering wonders of the modern world."

To construct it, workers dug huge underwater ditches for two tunnels and lined them with rocks. They then lowered plugged-up pieces of the concrete tunnel into the ditches. To allow cars to drive through, the workers then unplugged the tunnel pieces.

The tunnels run about a mile under the bay, allowing ships and boats to travel over them, according to The Washington Post. The tunnels connect to the bridge sections via four manmade islands that are each as large as a football field. The depth of the water ranges from 25 to 100 feet, according to the Chesapeake Bay Bridge and Tunnel Commission.

Before the structure was built, 50 to 60 cars at a time would drive up onto ferries, which would carry them across the water, with the Chesapeake Bay to the west and the Atlantic Ocean to the east.

The 23-mile Chesapeake Bay Bridge-Tunnel included only one northbound and one southbound lane until 1999, when one more lane was added in each direction. Over 100 million cars and trucks have driven on the bridge-tunnel since 1964.

Construction of a $755 million parallel tunnel that would help alleviate traffic is expected to begin in fall 2017 and be completed by 2022. Called the Thimble Shoal Channel, it would connect to the Chesapeake Bay Bridge-Tunnel's existing roadway.

Read This Next
Futurism
Owners of China's Traffic Hopping Bus Project Arrested
More on Advanced Transport
High Tide
Yesterday on the byte
We’re in Awe of Amsterdam’s Huge Underwater Bike Parking Garage
Quelle Surprise!
Thursday on the byte
Of Course Elon Musk Is Pushing The Cybertruck Back Again, What Did You Expect?
Stay Away
Wednesday on the byte
New SUV Features Electrified Door Handles and Pepper Spray Guns
READ MORE STORIES ABOUT / Advanced Transport
Keep up.
Subscribe to our daily newsletter to keep in touch with the subjects shaping our future.
+Social+Newsletter
TopicsAbout UsContact Us
Copyright ©, Camden Media Inc All Rights Reserved. See our User Agreement, Privacy Policy and Data Use Policy. The material on this site may not be reproduced, distributed, transmitted, cached or otherwise used, except with prior written permission of Futurism. Articles may contain affiliate links which enable us to share in the revenue of any purchases made.
Fonts by Typekit and Monotype.