The Space Travel of the Future: Ion Propulsion

This isn't science fiction. In fact, NASA has been studying ion propulsion since the 1950s. 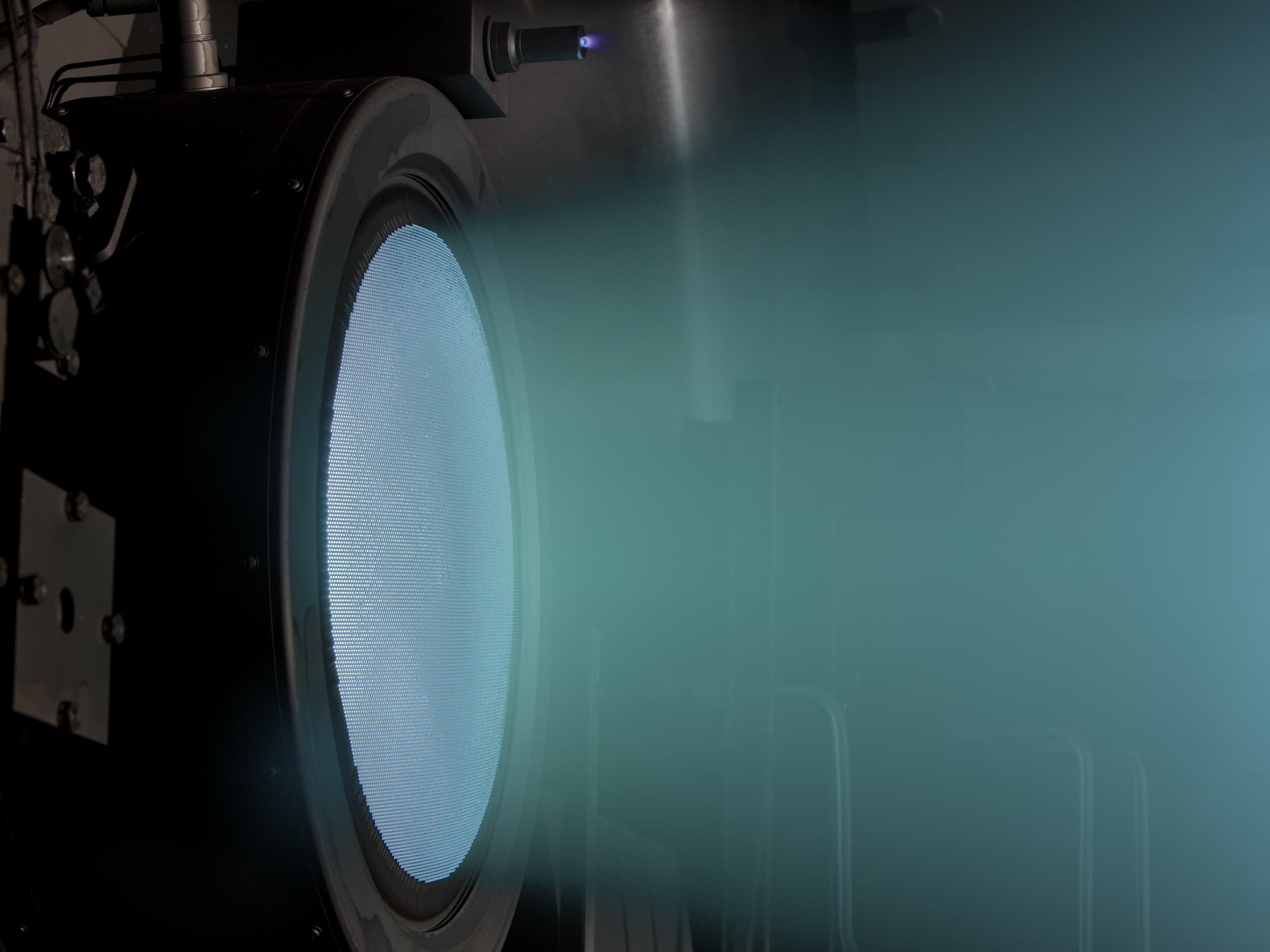 When we think of space travel, we tend to picture a massive rocket blasting off from Earth, with huge blast streams of fire and smoke coming out the bottom, as the enormous machine struggles to escape Earth’s gravity. Rockets are our only option for escaping Earth’s gravity, well—for now. But once a spacecraft has broken its gravitational bond with Earth, we have other options for powering them. Ion propulsion, long dreamed of in science fiction, is now used to send probes and spacecraft on long journeys through space.

Ion propulsion systems generate a tiny amount of thrust. Hold nine quarters in your hand, feel Earth’s gravity pull on them, and you have an idea how little thrust they generate. They can’t be used for launching spacecraft from bodies with strong gravity. Their strength lies in continuing to generate thrust over time. This means that they can achieve very high top speeds. Ion thrusters can propel spacecraft to speeds over 320,000 kp/h (200,000 mph), but they must be in operation for a long time to achieve that speed.

An ion is an atom or a molecule that has either lost or gained an electron, and therefore has an electrical charge. So ionization is the process of giving a charge to an atom or a molecule, by adding or removing electrons. Once charged, an ion will want to move in relation to a magnetic field. That’s at the heart of ion drives. But certain atoms are better suited for this. NASA’s ion drives typically use xenon, an inert gas, because there’s no risk of explosion.

In an ion drive, the xenon isn’t a fuel. It isn’t combusted, and it has no inherent properties that make it useful as a fuel. The energy source for an ion drive has to come from somewhere else. This source can be electricity from solar cells, or electricity generated from decay heat from a nuclear material.

Ions are created by bombarding the xenon gas with high energy electrons. Once charged, these ions are drawn through a pair of electrostatic grids—called lenses—by their charges, and are expelled out of the chamber, producing thrust. This discharge is called the ion beam, and it is again injected with electrons, to neutralize its charge. Here’s a short video showing how ion drives work:

Unlike a traditional chemical rocket, where its thrust is limited by how much fuel it can carry and burn, the thrust generated by an ion drive is only limited by the strength of its electrical source. The amount of propellant a craft can carry, in this case xenon, is a secondary concern. NASA’s Dawn spacecraft used only 10 ounces of xenon propellant—that’s less than a soda can—for 27 hours of operation.

In theory, there is no limit to the strength of the electrical source powering the drive, and work is being done to develop even more powerful ion thrusters than we currently have. In 2012, NASA’s Evolutionary Xenon Thruster (NEXT) operated at 7000w for over 43,000 hours, in comparison to the ion drive on DS1 that used only 2100w. NEXT, and designs that will surpass it in the future, will allow spacecraft to go on extended missions to multiple asteroids, comets, the outer planets, and their moons.

Missions using ion propulsion include NASA’s Dawn mission, the Japanese Hayabusa mission to asteroid 25143 Itokawa, and the upcoming ESA missions Bepicolombo, which will head to Mercury in 2017, and LISA Pathfinder, which will study low frequency gravitational waves.

With the constant improvement in ion propulsion systems, this list will only grow.

Read This Next
From the Dept. of Things to Buy
Review: The "Out of This World Cook Book" Chronicles the Early Meals of the Space Age
Overloaded
Whiny Space Tourists Say They Were Too Busy on the Space Station
The Moonian
Senior NASA Official Fears Getting "Stuck" on the Moon
Space Sick
Space Is Wreaking Havoc on Astronauts' Blood
Slip Sliding Away
NASA's Absurdly Expensive SLS Megarocket Is Broken Again
More on Sci-Fi Visions
What is Happening
Wednesday on the byte
Elon Musk Sets His Twitter Account to Private
From the Dept. of...
Monday on futurism
The Best Humidifiers of 2023
Human v. Giraffe
Jan 24 on the byte
Chaotic Italian Fashion Line Baffles Facial Recognition Software
READ MORE STORIES ABOUT / Sci-Fi Visions
Keep up.
Subscribe to our daily newsletter to keep in touch with the subjects shaping our future.
+Social+Newsletter
TopicsAbout UsContact Us
Copyright ©, Camden Media Inc All Rights Reserved. See our User Agreement, Privacy Policy and Data Use Policy. The material on this site may not be reproduced, distributed, transmitted, cached or otherwise used, except with prior written permission of Futurism. Articles may contain affiliate links which enable us to share in the revenue of any purchases made.
Fonts by Typekit and Monotype.