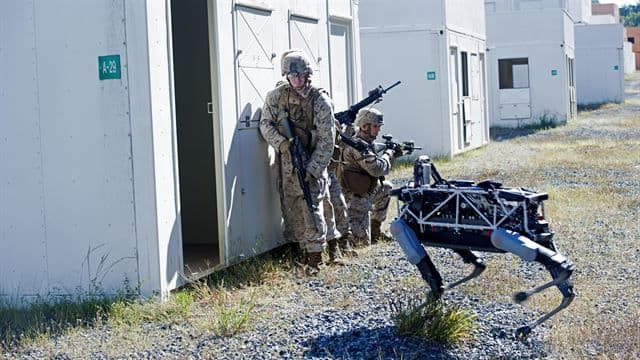 Several drills over the weekend has had the US Marine Corps test their new four-legged companion to see if it had what it takes to work closely with infantrymen in various situations. The test subject that had been used was the Spot robot made by Boston Dynamics (a Google subsidiary), which they revealed February of this year. The quadruped robot was brought to the Marine Corps Base located in Quantico, Virginia by a team from DARPA or the Defense Advanced Research Projects Agency. This same agency has already tested numerous robots from Boston Dynamics already including their BigDog quadruped robot.

The Spot robot has received positive praises from their handlers including Captain James Pineiro, who is the head of the Marine Corps Warfighting Lab's Quantico branch. He says that the marines have also been very receptive with the robot technology, and have already come up with many ideas on how to use Spot. This new technology has great potential which could really bolster the warfighting capabilities of US dismounted infantry in the future. Aside from that, the Marine Corps may no longer need to employ live dogs in war when robots like Spot can be used for such task.

Read This Next
Bot My Fault
News Site Admits AI Journalist Plagiarized and Made Stuff Up, Announces Plans to Continue Publishing Its Work Anyway
Unforgettable
Guy "Outsources" His Own Memory to AI
Botulism Toxin
CNET's AI Journalist Appears to Have Committed Extensive Plagiarism
SnowflakeGPT
Conservatives Furious, Claiming ChatGPT Has "Gone Woke"
Byline the Way
A New Scientific Paper Credits ChatGPT AI as a Coauthor
More on Artificial Intelligence
Good Morning!
Yesterday on the byte
Startup's Plans for Robot Lawyer Nixed After CEO Threatened With Jail
Secret Sauce
Yesterday on the byte
Amazon Begs Employees Not to Leak Corporate Secrets to ChatGPT
Pow Pow
Tuesday on the byte
Rival Slams CNET: "We Will Never Have an Article Written by a Machine"
READ MORE STORIES ABOUT / Artificial Intelligence
Keep up.
Subscribe to our daily newsletter to keep in touch with the subjects shaping our future.
+Social+Newsletter
TopicsAbout UsContact Us
Copyright ©, Camden Media Inc All Rights Reserved. See our User Agreement, Privacy Policy and Data Use Policy. The material on this site may not be reproduced, distributed, transmitted, cached or otherwise used, except with prior written permission of Futurism. Articles may contain affiliate links which enable us to share in the revenue of any purchases made.
Fonts by Typekit and Monotype.