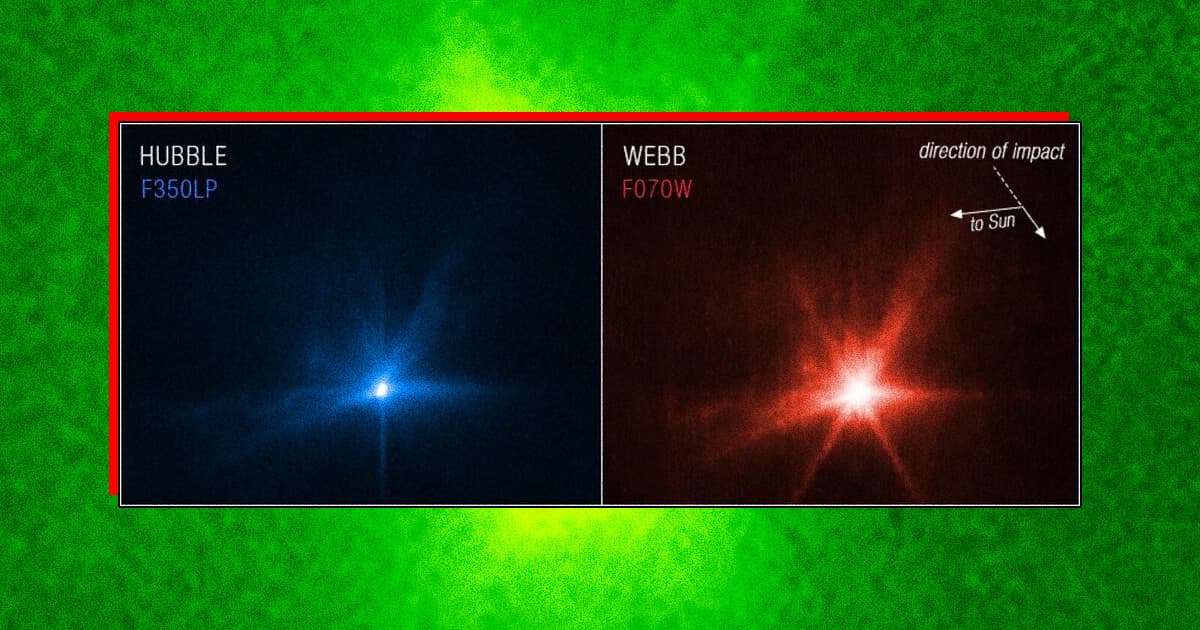 In a stunning example of intergenerational showmanship, the Hubble and the James Webb space telescopes have released some incredible views of NASA's asteroid-smashing mission, which the observatories captured before, during, and after its groundbreaking collision test.

As noted by the European Space Agency, these incredible images of NASA's Double Asteroid Reduction Test (DART) mark the first time that both Hubble and Webb have observed the same event at the same time — and the imagery is stunning.

With Hubble's time-lapse image composites glowing an icy blue and Webb's a fiery red, these awe-inspiring shots were difficult to capture.

"Observing the impact with Webb presented the flight operations, planning, and science teams with very unique challenges," the ESA wrote. "Because of the asteroid’s speed of travel across the sky, the teams worked in the weeks leading up to the impact to enable and test a method of tracking asteroids moving over three times faster than the original speed limit set for Webb."

While the Webb composites show the collision closer-up, the Hubble imagery manages instead to get higher-resolution looks at its aftermath. As ESA notes, scientists are somewhat puzzled by the slightly curved ejection rays in some of the time-lapse image composites, and "astronomers need to take a closer look to determine what this could mean."

And here's what the Webb captured:

The Hubble time lapse also provided astronomers on both sides of the pond with another curiosity to untangle.

"In the Hubble images, astronomers estimate that the brightness of [the asteroid pair] Didymos increased by three times following the impact," the post notes, "and are also particularly intrigued by how that brightness then held steady, even eight hours after impact."

Everything about these time-lapsed views of the DART mission is groundbreaking, from the success of NASA's asteroid-smashing craft itself to the first-of-its-kind comparisons of the same event captured by both Webb and Hubble.

As always, these peeks into deep space not only remind us of the incredible potential for human ingenuity, but also that we are, quite literally, living in the future.