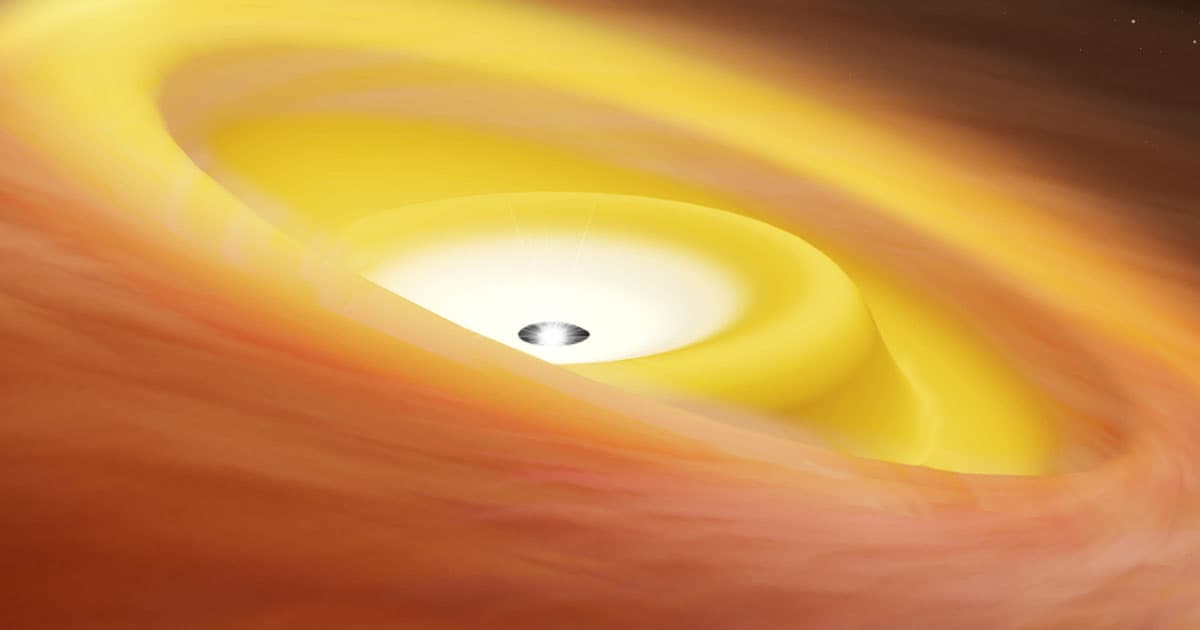 It's a relative baby in terms of star years.

It's a relative baby in terms of star years.

Planetary solar systems like our own don't just pop into the universe fully formed — instead they evolve from a ring of gas and dust called a protoplanetary disk, which surrounds an early-stage star, or protostar.

Now, astronomers using observations from the ALMA radio observatory in Chile have found a protostar unlike any other observed in the universe. The protostar, named L1527, is very young and has a "warped disk" that doesn't lie on a single astronomical plane — and it could lead to a better understanding of both the universe and our own solar system.

The planets in a solar system typically orbit on a single plane that lines up with the equator of the system's star.

However, astronomers have observed exceptions to this rule — solar systems with planets on multiple planes or on a single plane that isn't aligned with the star's equator. The planets in our own solar system, for example, orbit on planes as much as seven degrees off from the Sun's equator.

Astronomers speculated that this could be due to some warping of the protoplanetary disk when the system was young, and recent research bolstered that speculation. However, they still didn't know how early in a protostar's formation disk warping could take place.

In a study published on Monday in the journal Nature, researchers from RIKEN Cluster for Pioneering Research and Japan's Chiba University detail their discovery of L1527, a protostar with a warped disk consisting of two parts, each rotating on a different plane.

What's exciting about this is L1527's age. It's just tens of thousands of years old — an infant in star terms.

"This observation shows that it is conceivable that the misalignment of planetary orbits can be caused by a warp structure formed in the earliest stages of planetary formation," researcher Nami Sakai said in a press release.

The scientists will need to do more research to figure out what may have caused this warping and determine whether L1527 is an anomaly or merely one of many similar protostars.

Thankfully, L1527 is located just 450 light years away from Earth, and its disk is positioned in a way that makes observation easy, meaning the infant star could teach us more about our solar system — and the universe — in the not-so-distant future.

Ice Ice Baby
Check Out This Moon-Shaped Ice Crystal on the Space Station's Window
Yesterday
Read More
Weredata
Startup Announces Plans to Bury Server Farm on the Moon
Monday
Read More
NDA
SpaceX Reportedly Paid $250,000 to Silence Sexual Allegations Against Elon Musk
May 19
Read More
+Social+Newsletter
TopicsAbout UsContact Us
Copyright ©, Camden Media Inc All Rights Reserved. See our User Agreement, Privacy Policy and Data Use Policy. The material on this site may not be reproduced, distributed, transmitted, cached or otherwise used, except with prior written permission of Futurism. Fonts by Typekit and Monotype.