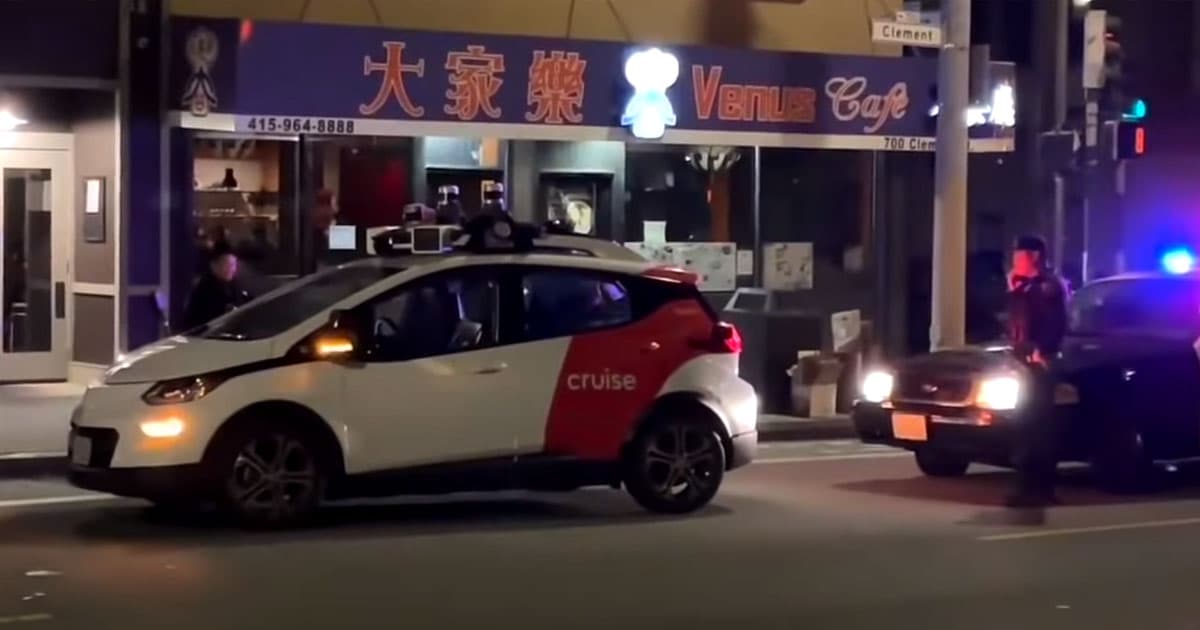 A now-viral video of San Francisco police officers pulling over a self-driving taxi is as dystopian as it is hilarious.

Initially posted to Instagram, the video filmed in San Francisco's Richmond district shows SFPD officers drive up behind the parked autonomous vehicle — only to have it leap forward and pull over again a couple hundred feet up the road.

Throughout the encounter, bystanders can be heard laughing and shouting "what the fuck" as the confused police officers circle the car, presumably trying to figure out what to do with it.

Owned by GM, the Cruise robotaxi company began offering free driverless nighttime rides to the public earlier this year, though people eager to beta test the service have to join a waitlist to do so, CNBC noted in its reporting on the incident.

In a response, Cruise said that the robotaxi did what it was supposed to do when confronted by law enforcement. And in a statement to CNBC, Cruise said that SFPD have a dedicated number to call when its officers pull over the company's robotaxis.

"Our AV yielded to the police vehicle, then pulled over to the nearest safe location, as intended," the account tweeted. "An officer contacted Cruise personnel and no citation was issued."

Given that this GM subsidiary is just the first of at least two autonomous taxi services to hit the Bay Area (along with Nuro, a driverless delivery startup), it's time we get used to this kind of hilarity — and hope it doesn't get any more dangerous.

READ MORE: Video shows what happens when a driverless car gets pulled over [CNBC]

It Was the Tesla
Manslaughter Case Has a Strange Twist: Tesla That Killed Couple Was on Autopilot
11. 1. 22
Read More
Full Self-Delusion
Survey: 42% of Tesla Autopilot Drivers Think Their Cars Can Entirely Drive Themselves
10. 13. 22
Read More
Red Light
Godfather of Self-Driving Cars Says the Tech Is Going Nowhere
10. 9. 22
Read More
+Social+Newsletter
TopicsAbout UsContact Us
Copyright ©, Camden Media Inc All Rights Reserved. See our User Agreement, Privacy Policy and Data Use Policy. The material on this site may not be reproduced, distributed, transmitted, cached or otherwise used, except with prior written permission of Futurism. Articles may contain affiliate links which enable us to share in the revenue of any purchases made.
Fonts by Typekit and Monotype.