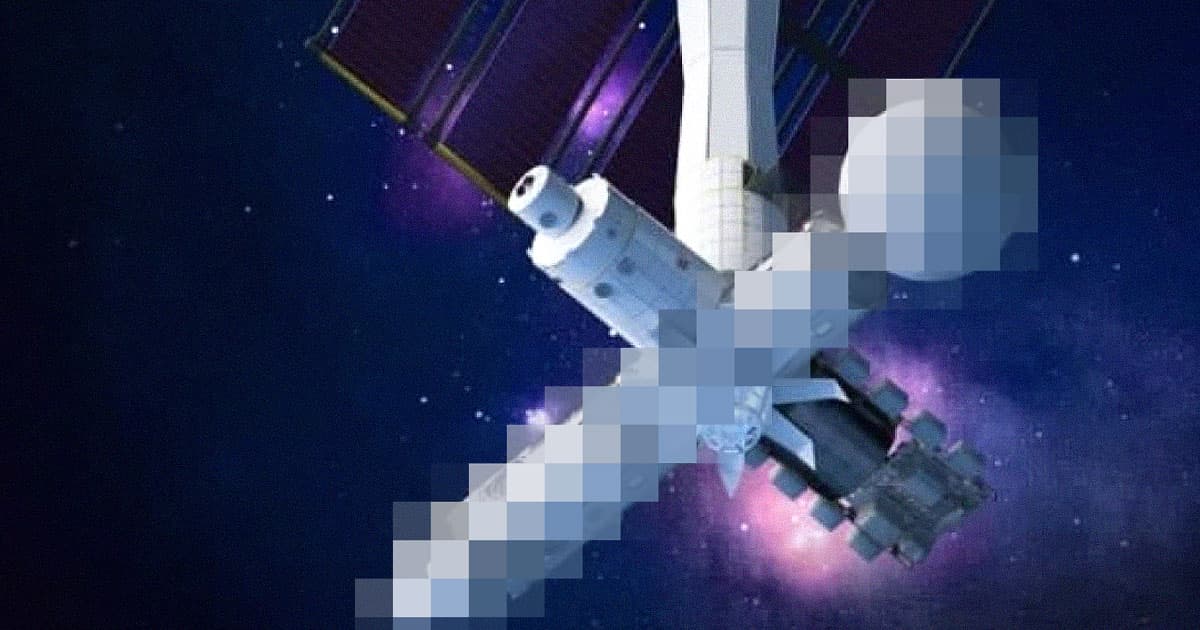 There's Something Weirdly Sexual About the Tom Cruise Space Station

The vibrations are coming from inside the space station film studio.

The vibrations are coming from inside the space station film studio.

A film studio is being built in space — but that's not the only, erm, titillating aspect to this story.

While it's admittedly kinda cool that the company working with Tom Cruise to produce a movie filmed in space is, per CNBC and other outlets, planning to build an orbital film studio, what's more eye-catching about this story is company's rendering of what the studio will look like.

The "content creation studio," slated to be launched in 2024, is to be built by commercial space station builder Axiom Space and the British company Space Entertainment Enterprises — the same pairing behind Cruise's allegedly forthcoming space film.

It takes but a glance to notice that part of this X-shaped spacecraft rendering looks a hell of a lot like the Hitachi-made Magic Wand, beloved the world over for its masturbatory purposes and often half-jokingly called "the Cadillac of vibrators."

Space Entertainment Enterprise (S.E.E), the company co-producing Tom Cruise’s upcoming movie that will be shot in space, plan to launch a sports arena and production studio in space. pic.twitter.com/2IFMss7bvC

For those who have been living under a rock for the past 50 years, here's what the Magic Wand — often just referred to as a "Hitachi" or "Magic Wand" even though Hitachi dropped its brand name from the toy almost a decade ago — looks like:

Admittedly, the "massager" part of this forthcoming space studio is larger and more globular than the head of a Magic Wand, but the resemblance is truly uncanny, right down to the short cylindrical attachment at the end featured on both the wired and wireless models as well as the space studio.

Ok sure, whatever, it won't work but fine sure ok.

BUT CAN WE DISCUSS how their space station is apparently a hitachi magic wand that got glued to some lightsabers? https://t.co/L9xvDT5p2U

Extrapolations aside, this rendering is either a hilarious oversight or an intentional troll — and either way, we're absolutely here for it.

More sexy space: We Need to Talk About Gay Sex in Space

Close Encounters
We Need to Talk About Gay Sex in Space
11. 18. 21
Read More
Brands We Love
The Latest Advancements in VR Sex Are Here in One Convenient Bundle
9. 28. 21
Read More
Brands We Love
These Unique, High-Tech Valentine's Day Gifts Will Spice Up Your Love Life
2. 11. 20
Read More
+Social+Newsletter
TopicsAbout UsContact Us
Copyright ©, Camden Media Inc All Rights Reserved. See our User Agreement, Privacy Policy and Data Use Policy. The material on this site may not be reproduced, distributed, transmitted, cached or otherwise used, except with prior written permission of Futurism. Articles may contain affiliate links which enable us to share in the revenue of any purchases made.
Fonts by Typekit and Monotype.