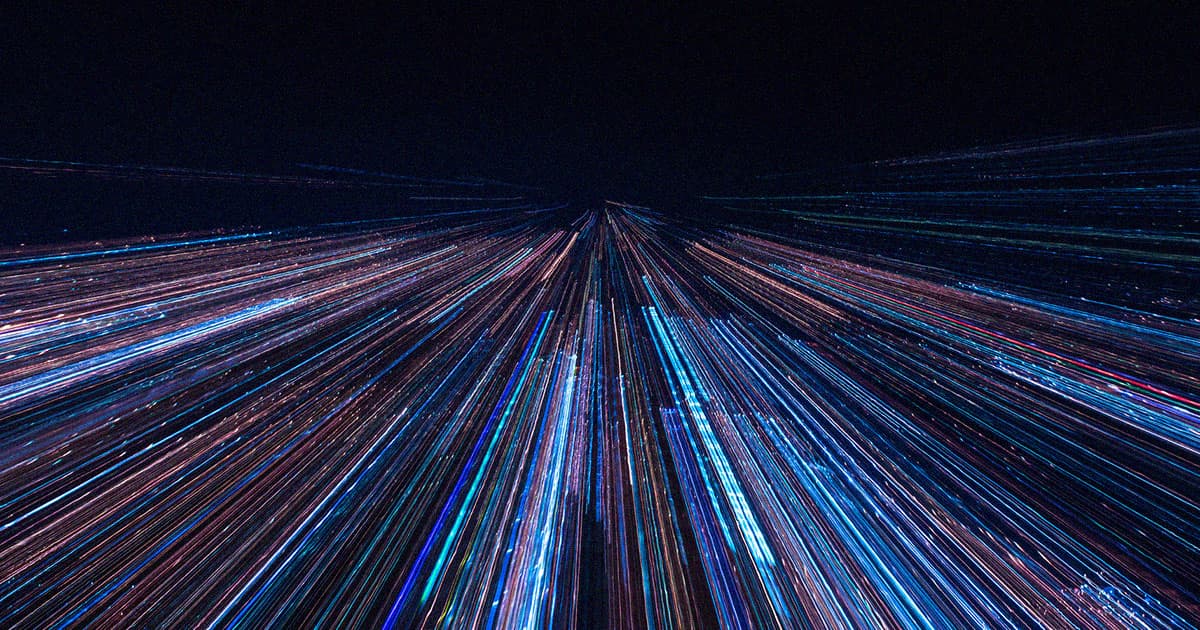 The world wide web is not enough, because scientists have managed to transmit data at a staggering 1.84 petabits per second — nearly twice the amount of global internet traffic in the same interval.

That blows the previous record for data transmission using a single light source and optical chip of one petabit per second out the water. And to put that ridiculous amount into perspective, a petabit is equal to one million gigabits. A single gigabit, or 1,000 megabits, is about the fastest download speed money can buy for most households.

To achieve the astonishing feat, researchers from the Technical University of Denmark (DTU) and Chalmers University of Technology used a custom optical chip that can make use of a single infrared light by splitting it into hundreds of different frequencies that are evenly spaced apart. Collectively, they're known as a frequency comb. Each frequency on the comb can discretely hold data by modulating the wave properties of light, allowing scientists to transmit far more bits than conventional methods.

Chip on the Shoulder

In a study about the work published in the journal Nature Photonics, the scientists describe how they transmitted the 1.84 petabits per second worth of "dummy" data over 4.9 miles of optical fiber while using 223 wavelength channels in the frequency comb. According to the scientists, to transmit data at those kinds of speeds using commercial equipment would require over one thousand lasers. This experiment, using a cutting edge chip, only needed one.

"What is special about this chip is that it produces a frequency comb with ideal characteristics for fiber-optical communications," said Victor Torres Company, head of the research group and a professor at Chalmers, in a press release. "It has high optical power and covers a broad bandwidth within the spectral region that is interesting for advanced optical communications.

As dizzyingly fast as the new record breaking speed is, the researchers say they're just getting started and believe speeds of up to 100 petabits per second are possible.

"The reason for this is that our solution is scalable," explained study lead author and DTU professor Leif Katsuo Oxenløwe. "Both in terms of creating many frequencies and in terms of splitting the frequency comb into many spatial copies and then optically amplifying them, and using them as parallel sources with which we can transmit data."

While the researchers' efforts have shown it's possible, it still needs to be proven to be practical. But Oxenløwe believes that his team's solution can make data transmission much more efficient, thereby leaving "a smaller climate footprint."

More on data transmission: SpaceX Has a Major Problem With Its Starlink Internet Connections

Brands We Love
Back-Up Everything In Your Life With 10TB Of Cloud Storage That's 95% Off
9. 6. 20
Read More
Brands We Love
Get Ahead With The Complete 2020 IT Certification Exam Prep Mega Bundle
9. 6. 20
Read More
Brands We Love
Cut Better Videos With This Adobe Premiere Pro Production Course Bundle
9. 2. 20
Read More
+Social+Newsletter
TopicsAbout UsContact Us
Copyright ©, Camden Media Inc All Rights Reserved. See our User Agreement, Privacy Policy and Data Use Policy. The material on this site may not be reproduced, distributed, transmitted, cached or otherwise used, except with prior written permission of Futurism. Articles may contain affiliate links which enable us to share in the revenue of any purchases made.
Fonts by Typekit and Monotype.