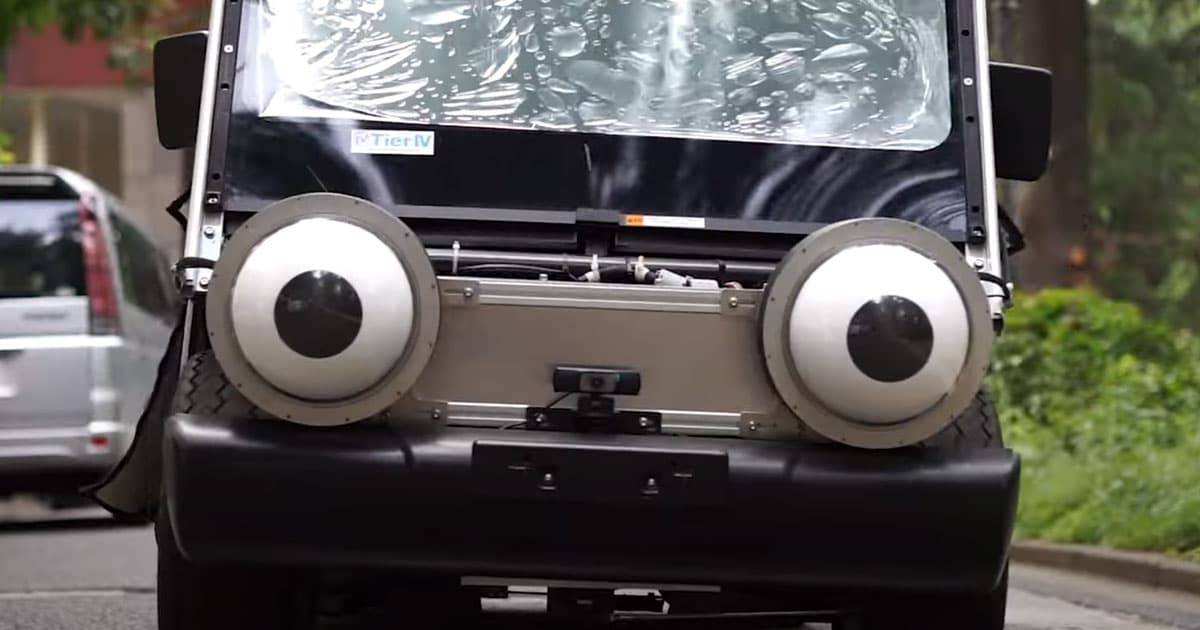 Vaguely terrifying, to be fair.

Vaguely terrifying, to be fair.

Stare Into My Soul

It's probably only a matter of time before more and more autonomous vehicles start sharing the road with us.

That means there'll be far more interactions between pedestrians and driverless cars — and researchers are trying to get ahead of any possible friction points by making it clear to the pedestrian they are crossing the street in front of a vehicle that is driving itself.

One idea, from researchers in Japan: giant, animatronic googly eyes attached to the front of autonomous golf carts — and the results speak for themselves.

Unlike with human drivers, pedestrians have no obvious way to interact with a vehicle that is relying entirely on sensors and onboard computers.

In a new study presented International Conference on Automotive User Interfaces last month, researchers from the University of Tokyo and Kyoto University attached giant, remotely controlled eyes to the front of autonomous golf carts to see if they could reduce traffic accidents.

Using a 360-degree camera, they filmed the cart approaching an intersection.

In an experiment, participants then relived these scenarios with the use of a virtual reality headset, and were asked to make a snap decision whether they'd be willing to cross the street or not with the golf cart approaching them.

That's despite being a little terrified of the design of the giant eyes used in the experiment, as the participants were quick to point out.

"The results showed that the eyes can reduce potential traffic accidents and that gaze direction can increase pedestrians’ subjective feelings of safety and danger," the paper reads.

As Gizmodo points out, it's also a reminder of the fact that not only vehicles will have to adapt to a new reality — we'll also have to ensure that humans have a chance to do the same.

Netflix and Drive
Mercedes Claims to Have Achieved Level 3 Automation, Beating Tesla
Monday
Read More
Steering Wheels Coming Off
Automotive Lobbying Group Abandons the Term "Self-Driving"
1. 26. 22
Read More
Driving Himself Crazy
Watch Elon Musk Promise Self-Driving Cars "Next Year" Every Year Since 2014
1. 19. 22
Read More
+Social+Newsletter
TopicsAbout UsContact Us
Copyright ©, Camden Media Inc All Rights Reserved. See our User Agreement, Privacy Policy and Data Use Policy. The material on this site may not be reproduced, distributed, transmitted, cached or otherwise used, except with prior written permission of Futurism. Articles may contain affiliate links which enable us to share in the revenue of any purchases made.
Fonts by Typekit and Monotype.