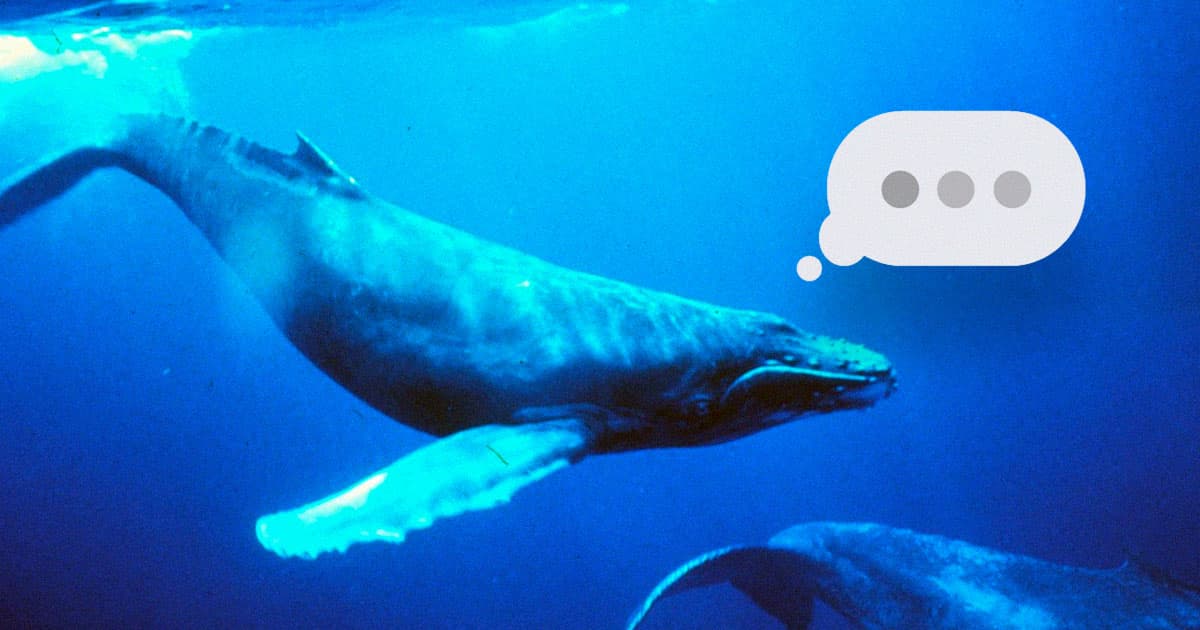 The neural network could provide the key to communicating with whales.

The neural network could provide the key to communicating with whales.

An interdisciplinary team of scientists have launched a project with the goal of decoding and communicating with sperm whales.

That’s right. That scene from "Finding Nemo" might actually become a reality.

The initiative is called Project CETI (Cetacean Translation Initiative), and its goal is to use artificial intelligence in order to understand the language of whales, according to Hakai Magazine. More specifically, the team wants to decode the clicking sounds sperm whales use to communicate with one another, also known as "codas."

To pull it off, the researchers plan on leveraging natural-language processing (NLP), a sub-field of AI focused on processing written and spoken language. The team has already applied sperm whale coda recordings to an NLP algorithm, with promising results.

"They seemed to be working very well, at least with some relatively simple tasks," Michael Bronstein, the lead of machine learning for Project CETI, said about the codas to Hakai.

As amazing as the teams’ goals are, there is one enormous hurdle: they need data — and a lot of it.

In fact, Project CETI’s first goal is to collect four billion sperm whale codas. The team currently plans to build off existing research by the Dominica Sperm Whale Project, which has collected less than 100,000 codas. For comparison, GPT-3 — the well-known deep-learning predictive language model — was trained using roughly 175 billion words, according to Hakai.

The researchers will also need to put all of the codas into context. After all, words without context don’t offer any meaning. And that'll require years of research in sperm whales’ natural habitats.

If and when Project CETI accomplishes that herculean task, though, it’s actually a feasible possibility that a language model could be developed that could communicate in "whale" — which could permanently alter the way humans perceive and interact with nature.

READ MORE: Are We on the Verge of Chatting with Whales? [Hakai Magazine]

More on language AI: Researchers Have Created an AI System That Teaches Itself New Languages

AI That Counts And Identifies Wildlife Could Be A Game-changer For Ecologists
6. 6. 18
Read More
Whales and Sharks Are the New Victims of Our Plastic Waste, Study Finds
2. 5. 18
Read More
How Artificial Intelligence Is Making Nuclear Reactors Safer
11. 23. 17
Read More
+Social+Newsletter
TopicsAbout UsContact Us
Copyright ©, Camden Media Inc All Rights Reserved. See our User Agreement, Privacy Policy and Data Use Policy. The material on this site may not be reproduced, distributed, transmitted, cached or otherwise used, except with prior written permission of Futurism. Articles may contain affiliate links which enable us to share in the revenue of any purchases made.
Fonts by Typekit and Monotype.