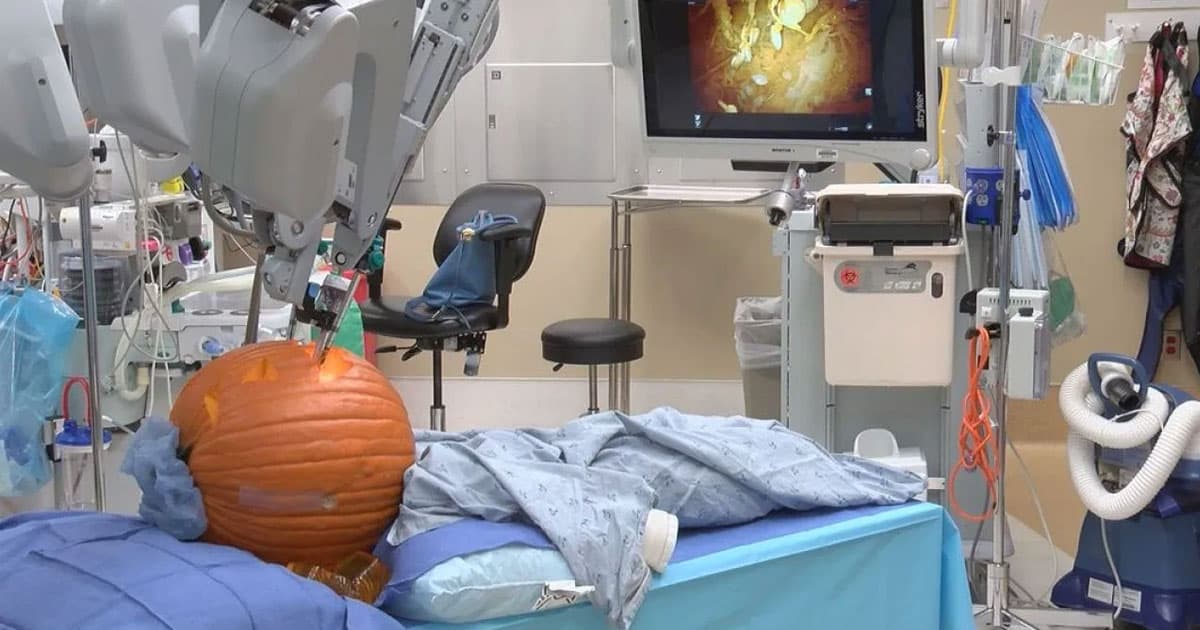 Watch a Surgery Robot Operate on a Jack-o'-Lantern

They did surgery on a pumpkin.

They did surgery on a pumpkin.

A team of surgeons from Charlotte, North Carolina have demonstrated new robotic surgeon technology by carving a jack-o'-lantern, according to local news station WBTV. The team treated the seeds inside the pumpkin as tumors and carefully excised them one by one.

The robot surgeon wasn't de-seeding the pumpkin autonomously — human surgeons were in full control of the robot's movement throughout the procedure.

There are numerous advantages to having a robot perform surgeries instead of a human surgeon.

"It’s much more accurate, takes away the tremors, you can suture with much thinner sutures, as thin as a human hair," General Surgeon Vedra Augenstein told WBTV.

"The patient would have to have very large incisions and wound complications, and take a lot of pain medicine," she added. "So what we’re trying to do here is minimize all of that and get patients home sooner with much small incisions."

Let's just hope the pumpkin will be able to afford the procedure.

For the First Time Ever, a Robot Performed an Operation Inside a Human Eye
5. 8. 17
Read More
This Synthetic Dog Can Breathe, And It's Saving Lives
6. 8. 16
Read More
A 3D Printed Skull Just Saved a Child's Life
4. 7. 16
Read More
+Social+Newsletter
TopicsAbout UsContact Us
Copyright ©, Camden Media Inc All Rights Reserved. See our User Agreement, Privacy Policy and Data Use Policy. The material on this site may not be reproduced, distributed, transmitted, cached or otherwise used, except with prior written permission of Futurism. Fonts by Typekit and Monotype.