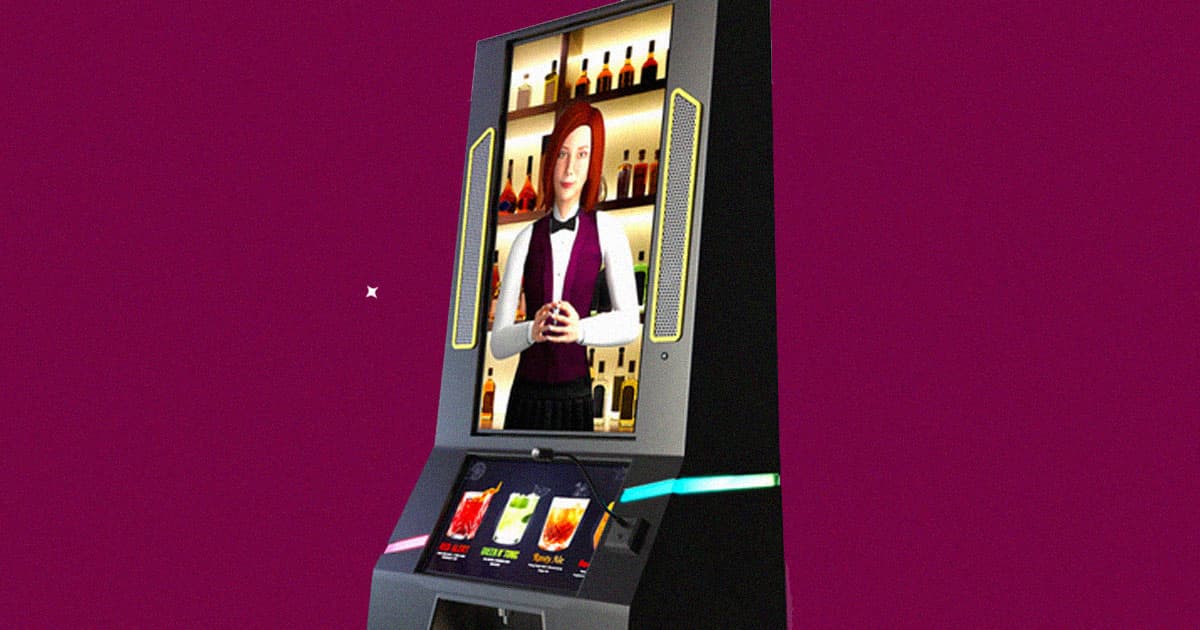 Just in time for the weekend.

Just in time for the weekend.

Cecilia, you're breaking our hearts — or at least you're making us drinks.

A robot bartender named Cecilia is the newest hospitality expert at Florida International University's Bacardi Center of Excellence — and, as the Miami Herald reports, it sounds like she's pretty damn good at her job.

Standing at about seven feet tall, the console that houses the on-screen personality is essentially a soda dispenser for cocktails. But according to her customers, she "pours like an angel."

Cecilia is fast, too. She can make 120 cocktails an hour while cracking dumb jokes.

When one journalist from The Spoon asked her for a "sweet" cocktail, Cecilia chimed in: "Not as sweet as buying Bitcoin back at [sic] 2011, but sweet enough for a cocktail."

We've certainly never seen anything like this before... pic.twitter.com/ALlrfFiTUK

The vest-wearing ginger was originally created about two years ago as a one-off project by Nir Cohen Paraira and Elad Kobi from the Israeli hospitality tech group GKI. She was a big hit at this year's Las Vegas Consumer Electronics Show, according to the Herald.

According to her inventors, Cecilia can speak 40 languages, and take cashless payments.

Because she's basically a glorified app, Cecilia can also provide bar owners with analytics about what drinks are popular and when the bar is busiest.

She is, however, limited to only having 12 liquid tanks, which means human bartenders may have to resort to helping out with pre-mixed beverages.

While other robot bartenders already exist in lots of different forms — like the one currently serving up 90-second cocktails at the Winter Olympics in Beijing — Cecilia's makers say her "humanity" sets her apart from the rest.

As Brian Connors, an FIU hospitality professor who runs the Bacardi Center, told the Herald, Cecilia's personality makes all the difference.

"You can get a rum and coke anywhere," he told the newspaper, "but how often are you going to get it from a robot that tells bad jokes?"

To some, it's essentially a glorified screen with booze tanks — but we could all use a drink right now.

And the darker side of lady AIs: Men Are Creating AI Girlfriends and Then Verbally Abusing Them

Diner Drama
People Furious at Robot Serving Pancakes at Denny's
11. 28. 21
Read More
Killer Robot Update
Uh Oh, They Strapped a Sniper Rifle to a Robot Dog
10. 12. 21
Read More
Mini-Brain in the Cell Membrane
This Startup's Computer Chips Are Powered by Human Neurons
4. 1. 20
Read More
+Social+Newsletter
TopicsAbout UsContact Us
Copyright ©, Camden Media Inc All Rights Reserved. See our User Agreement, Privacy Policy and Data Use Policy. The material on this site may not be reproduced, distributed, transmitted, cached or otherwise used, except with prior written permission of Futurism. Fonts by Typekit and Monotype.