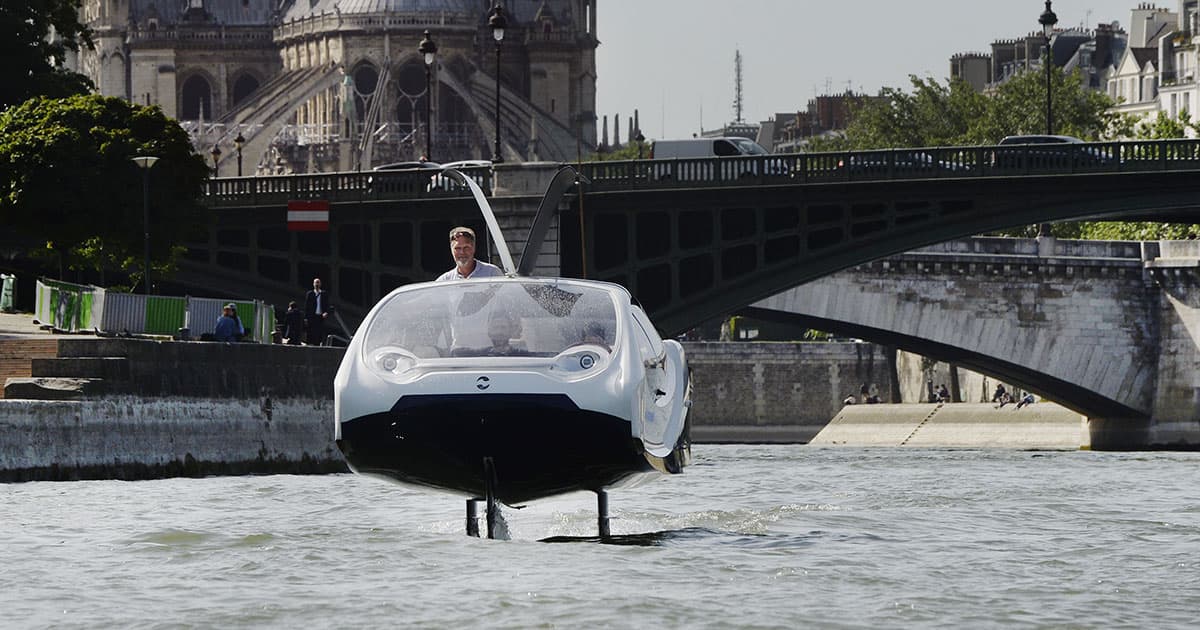 The taxi reportedly produces no noise or CO2 emissions.

The taxi reportedly produces no noise or CO2 emissions.

French startup Seabubbles recently took its in-development autonomous electric taxi, which uses hydrofoils to appear to "fly" above water, for a test ride on Paris' River Seine — and police promptly pulled the craft over for exceeding the speed limit.

"Our vehicle has the right to go at 30km/h, when normally the speed limit on the river is 12km/h," SeaBubbles co-founder Anders Bringdal told The Independent. "So they just pulled us over to check our paperwork and make sure that all was in order."

Seabubbles' goal is to launch the taxi, dubbed the Bubble, in cities in the United States, France, and Holland in 2020.

Once the service launches, you'll be able to order rides using an app, not unlike how they might summon an Uber or Lyft today. Riders would then meet the vehicle at a dock equipped with solar tiles, underwater generators, and wind turbines, all of which produce energy to charge the vehicles' batteries.

According to Seabubbles, the Bubbles produce no waves, noise, or CO2 emissions, making them an environmentally attractive alternative to fossil fuel-powered cars.

Additionally, if the service takes off, it could move some of the traffic currently clogging city streets to their waterways — potentially improving the urban transportation experience for everyone, not just the company's customers.

More on the "flying" taxi: You’ve Never Seen Taxis Like This Before

Uber Announces Flying Taxi Research Center In France
5. 24. 18
Read More
Uber Gives Us The First Glimpse Of What It Wants Its Flying Taxi To Look Like
5. 8. 18
Read More
AirSpaceX's Autonomous Electric Flying Taxi Will Hit the Skies in 2026
1. 26. 18
Read More
+Social+Newsletter
TopicsAbout UsContact Us
Copyright ©, Camden Media Inc All Rights Reserved. See our User Agreement, Privacy Policy and Data Use Policy. The material on this site may not be reproduced, distributed, transmitted, cached or otherwise used, except with prior written permission of Futurism. Articles may contain affiliate links which enable us to share in the revenue of any purchases made.
Fonts by Typekit and Monotype.