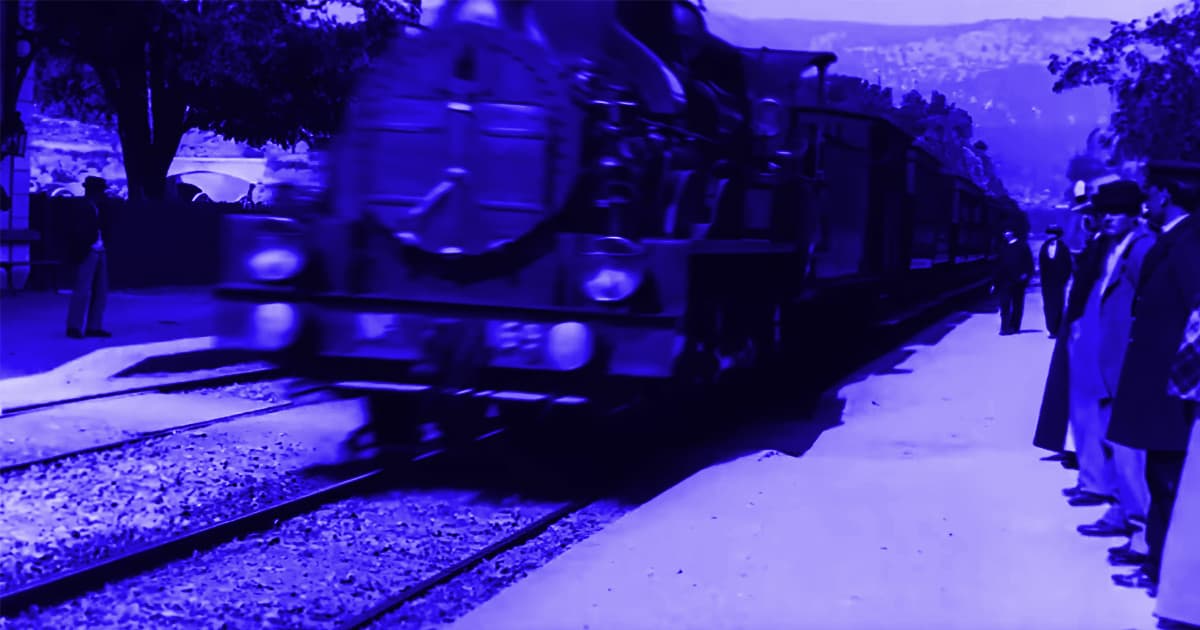 A YouTuber upscaled the clip to 4K resolution at 60 frames per second.

A YouTuber upscaled the clip to 4K resolution at 60 frames per second.

When it premiered in 1896, the silent short film "L'Arrivée d'un train en gare de La Ciotat" was a cinematic wonder. Compared to today's motion pictures, though, the quality of the black-and-white clip is downright primitive.

But now, YouTuber Denis Shiryaev has found a way to show what the film might have looked like if it had been recorded using more modern technology — by using artificial intelligence to upscale it to 4K resolution at 60 frames per second.

"L'Arrivée d'un train en gare de La Ciotat," which translates to "Arrival of a Train at La Ciotat," depicts just what its title implies: a train arriving at a station.

The original clip released in 1896 is jerky and grainy, and the features of the people at the station in the film are near-impossible to decipher.

Shiryaev applied two video enhancement programs — Depth-Aware Video Frame Interpolation and Gigapixel AI — to an already cleaned-up version of the clip to produce one that's even sharper and smoother.

The visual quality of Shiryaev's creation isn't exactly on par with that of, say, the latest Marvel Cinematic Universe blockbuster.

But according to urban legend, when the original film premiered, viewers ran out of the theater fearing that the approaching train was going to fly right out of the screen. It's hard to imagine how they might've reacted to seeing this upscaled take on the clip.

You can compare all three versions — the original, Shiryaev's source, and Shiryaev's creation — below:

AI Wrote This Short Sci-Fi Film Starring David Hasselhoff
5. 12. 17
Read More
Pizza Personnel
Domino's Buying Hundreds and Hundreds of Electric Delivery Vehicles
Nov 23
Read More
Another One
Coinbase May Be in Real Serious Trouble Now
Nov 23
Read More
+Social+Newsletter
TopicsAbout UsContact Us
Copyright ©, Camden Media Inc All Rights Reserved. See our User Agreement, Privacy Policy and Data Use Policy. The material on this site may not be reproduced, distributed, transmitted, cached or otherwise used, except with prior written permission of Futurism. Articles may contain affiliate links which enable us to share in the revenue of any purchases made.
Fonts by Typekit and Monotype.