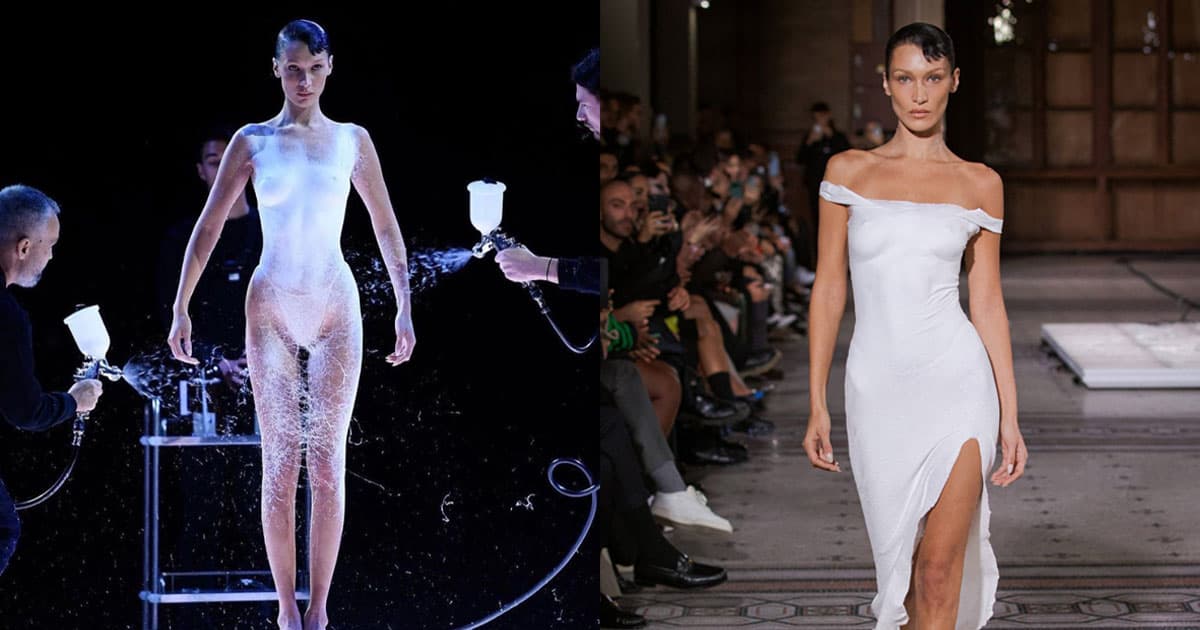 "We're not going to make money on this, but it's a beautiful moment."

"We're not going to make money on this, but it's a beautiful moment."

The Coperni label — which is named after mathematician and astronomer Nicolaus Copernicus — called the spectacle a moment where "fashion meets technology," and indeed it was. Fabrican, created by Dr. Manel Torres, is a fascinating material, one that can be rebottled and reused after a clothing item is made.

But while this was celebrated as a feat of innovation, Fabrican actually isn't new; as Rachel Tashjian pointed out for Harper's Bazaar, it was created nearly 20 years ago. And to that point: where's the line between true innovation, and bottling something into spectacle and calling it new?

As Vogue Business explains, the liquid inside of a Fabrican bottle contains cotton or synthetic fibers. Those materials are suspended in a polymer solution, which evaporates upon contact with the skin.

In other words, Fabrican's creators envision a world where their solution can become a sprayable clothing cocktail — mix in your favorite perfume or unidentified tech-interfacing conductor, and you have what may one day be the bespoke 'fit of the future.

"After a decade of research," the site continues, "this futuristic vision is taking shape."

But this is Fabrican's vision, not Coperni's — the dress, as they admit themselves, won't (and really can't) actually be sold.

"It's our duty as designers to try new things and show a possible future," Coperni's creative director, Sébastien Meyer, told Vogue Business. "We're not going to make money on this, but it's a beautiful moment."

That's a lovely sentiment, but even though the brand won't be selling the Fabrican dress, it has dominated the post-PFW SEO circuit, which will likely generate more sales than one dress ever could. And sure, that could be great for Fabrican, should they ever make it to market in a meaningful way.

For now, though, the innovation that is Fabrican exists mostly in a viral video.

Brands We Love
These Specially Designed 'Boxers With Pockets' Are the Future of Comfort
8. 5. 20
Read More
Brands We Love
These Expertly Designed Sneakers Are Actually Steel Toe Boots In Disguise
7. 17. 20
Read More
Brands We Love
These High Tech Work Shoes Look Like Sneakers But Protect Like Boots
1. 10. 20
Read More
+Social+Newsletter
TopicsAbout UsContact Us
Copyright ©, Camden Media Inc All Rights Reserved. See our User Agreement, Privacy Policy and Data Use Policy. The material on this site may not be reproduced, distributed, transmitted, cached or otherwise used, except with prior written permission of Futurism. Articles may contain affiliate links which enable us to share in the revenue of any purchases made.
Fonts by Typekit and Monotype.