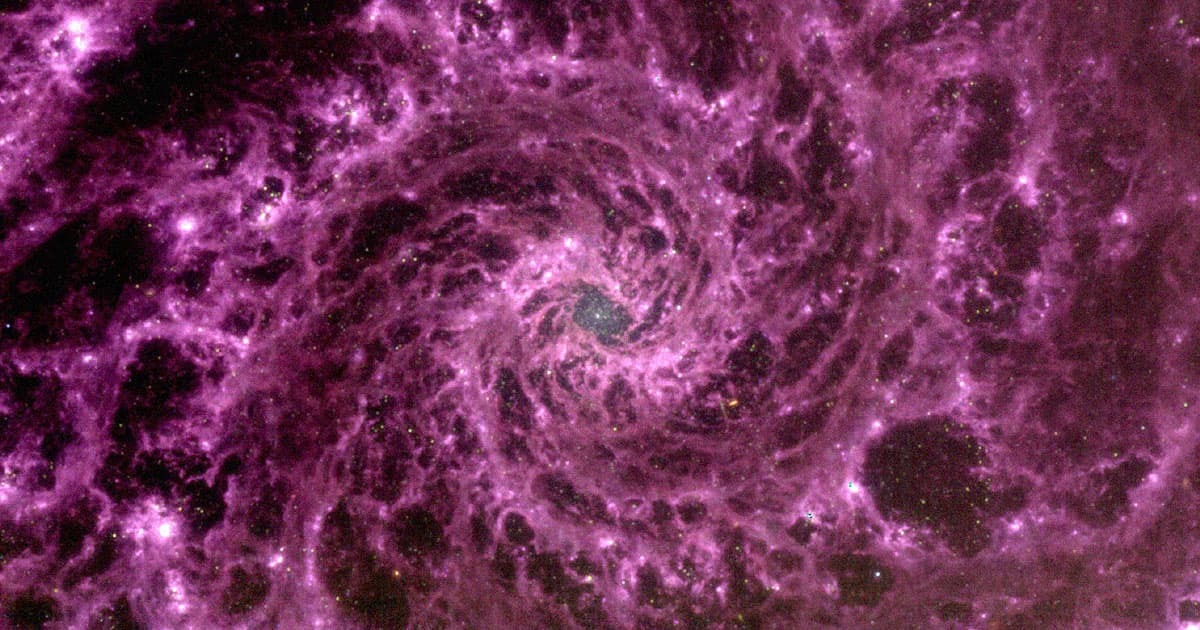 NASA's James Webb Space Telescope (JWST) is now churning out breathtaking images at a regular cadence — and its latest snapshot of the spiral galaxy Messier 74 (M74) is truly spectacular.

The image, as taken by the space observatory's Mid Infrared Instrument (MIRI), shows the galaxy's vast spiraling arms in a gorgeous deep purple, a dizzying capture that has astronomers bursting with excitement.

It's only the beginning of the groundbreaking space telescope's scientific operations.

"We are drinking from a firehose," Gemini Observatory chief scientist Janice Lee replied to Brammer's post. Lee is behind the program that produced the data, in Inverse's analysis, which was eventually turned into the spectacular image.

M74, also known as NGC 628, is roughly 32 million light-years from Earth and is often used as a textbook example of a spiral galaxy, a class of galaxy that is made up of a flat, rotating disk with a fainter halo of stars clustering around it.

Roughly 60 percent of galaxies are thought to be spiral galaxies, according to the European Space Agency, including our own Milky Way.

In case you're wondering, the strange purple cast is caused by interstellar polycyclic aromatic hydrocarbons (PAHs) making "the filters used for the blue and red channels brighter relative to the green," as Brammer explained in a follow-up.

"I just stuck the three separate images from the JWST automatic pipeline together," he explained.

"Your daily reminder that many of the people who worked on JWST are children of the 60s," JWST scientist Mark McCaughrean tweeted. "MIRI’s very trippy mid-infrared tie-dye view of star formation in the galaxy NGC628, man."

While NASA's Hubble telescope has spent much of its lifetime studying these spiral features, the JWST will allow is to peer into their center with an unprecedented degree of fidelity — and if this image is any preview, we have much to look forward to.