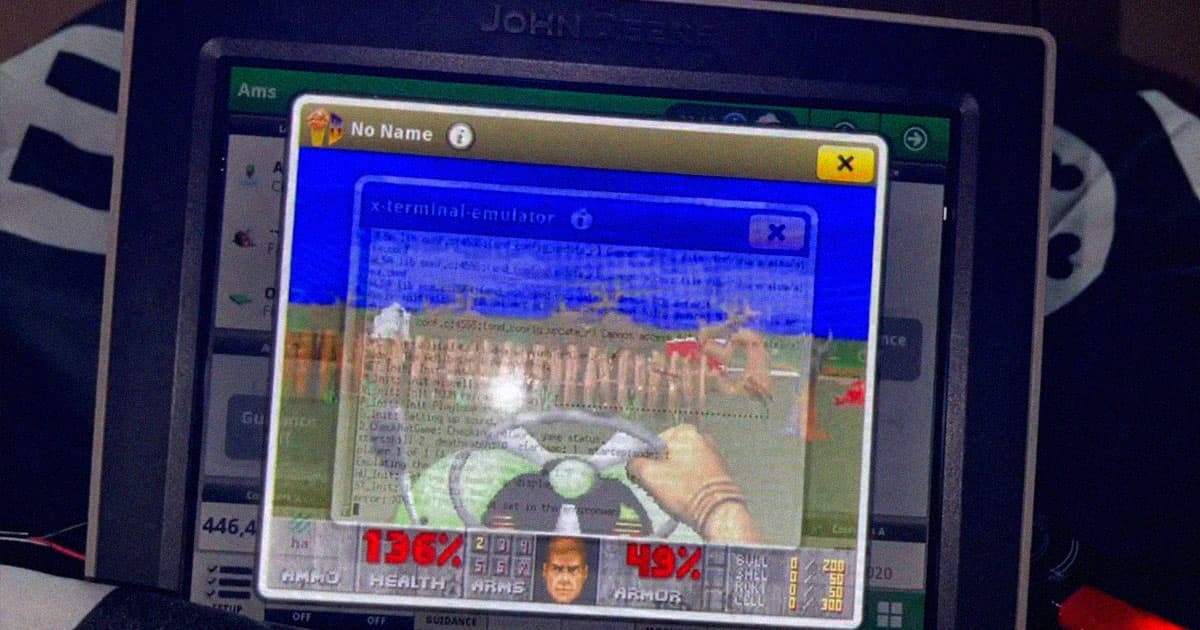 Hacker Installs DOOM on John Deere Tractor For Some Reason

Someone hacked a John Deere tractor to make it run DOOM — and we've got to admit, it's pretty based.

A hacker who goes by the handle "Sick Codes" unveiled a way to jailbreak John Deeres into playing the iconic 1993 shooter on their digital control displays at this year's DefCon hacker conference in Las Vegas.

As a tweet of the mod demonstrates, Sick Codes also teamed up with another hacker to create a mod that allow users to play from the perspective of a tractor operator, which needless to say is incredibly sick. One Twitter user and DefCon attendee notes that gameplay involves harvesting corn to raise health or hunting down escaped pigs, which is a really fun take on the game that was originally about slaying demons but has since evolved into a potpourri of delightful user mods.

With epic just-in-time help by NZ based doom modder @Skelegant. She helped get this run using DeHacked Doom, since gzdoom was a mission. Together, we teamed up to make this happen. She is amazingly talented. pic.twitter.com/OfVDMvRhzR

As Wired reports, Sick Codes got into the world of DOOM mods not via gaming but by way of tractor hacking, a burgeoning practice in which tractor operators jailbreak their equipment to circumvent manufacturer-imposed digital locks and trick out their tractors like they did in the analog days.

Tractor hacking, the report notes, is part of the broader "right to repair" campaign that advocates complete consumer control over electronics settings. Last year, Wired reports, Sick Codes presented at DefCon about the fascinating world of tractor operating system bugs and interface applications. His research was so comprehensive, in fact, that John Deere and other tractor companies patched their software to crack down on his bag of tricks.

"The right-to-repair side was a little bit opposed to what I was trying to do," the hacker told Wired. "I heard from some farmers; one guy emailed me and was like ‘You’re fucking up all of our stuff!’ So I figured I would put my money where my mouth is and actually prove to farmers that they can root the devices."

With the tractor DOOM mod that can be played on an actual tractor, it looks like Sick Codes did indeed put his money where his mouth is — and he hopes that this will contribute to the growing open-source tractor modding movement.

"Liberate the tractors!" the hacker mused, and huzzah to that.