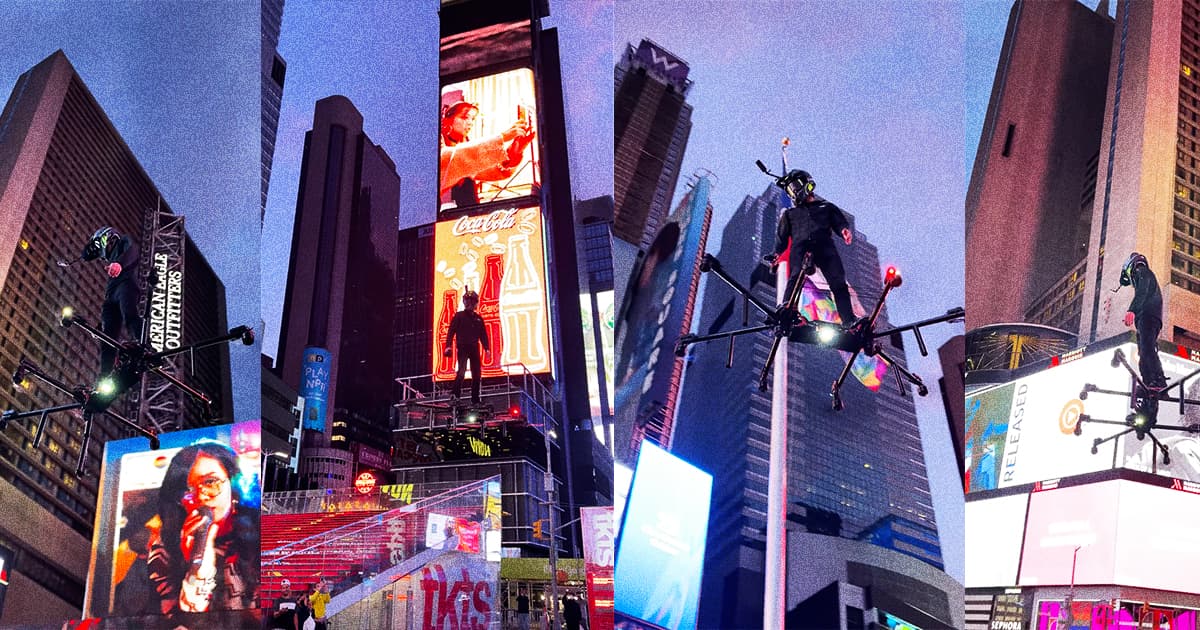 I Need a Hero

Unless you're a regular visitor to Times Square — and if so, why? — you may have missed when a mysterious man soared overhead, surfing through the air on a bizarre, hoverboard-like aircraft.

It's hard to see the footage of the Times Square flight — or any of the other videos of the aircraft in action — and not draw a comparison to the Spider-Man villain, the Green Goblin. But after catching up with Hunter Kowald, the aircraft's inventor, designer, tester, and basically everything else, we walked away with a clear message: He comes in peace.

"People are trying to put a little bit more of a dramatic effect too, which I really don’t necessarily like too much," Kowald said of the Green Goblin comparison. "But I like to think that I’m more of a superhero than a villain."

It's a Bird and/or Plane

In an extensive interview, Kowald talked about what it was like to build a real-life hoverboard, which he calls the SkySurfer, and how he came to trust it enough to actually climb on and soar into the skies.

Kowald also peppered in details on his plans for the device, like using it to facilitate beach rescues or to help find and rescue survivors after a natural disaster — all things that a supervillain probably wouldn't think of doing with a personal flying machine.

"Pushing this [tech] forward in the right way is definitely the top priority, of course," Kowald told us.

More on Kowald: We Talked to the Guy Who Flies Around on a Giant Drone That He Built Himself

Nyoom!
We Talked to the Guy Who Flies Around on a Giant Drone That He Built Himself
7. 6. 21
Read More
Do The Worm
Scientists Name "Funky Worm" Amphibian After a Weird 70s Funk Song
Yesterday
Read More
High Tide
We’re in Awe of Amsterdam’s Huge Underwater Bike Parking Garage
Yesterday
Read More
+Social+Newsletter
TopicsAbout UsContact Us
Copyright ©, Camden Media Inc All Rights Reserved. See our User Agreement, Privacy Policy and Data Use Policy. The material on this site may not be reproduced, distributed, transmitted, cached or otherwise used, except with prior written permission of Futurism. Articles may contain affiliate links which enable us to share in the revenue of any purchases made.
Fonts by Typekit and Monotype.