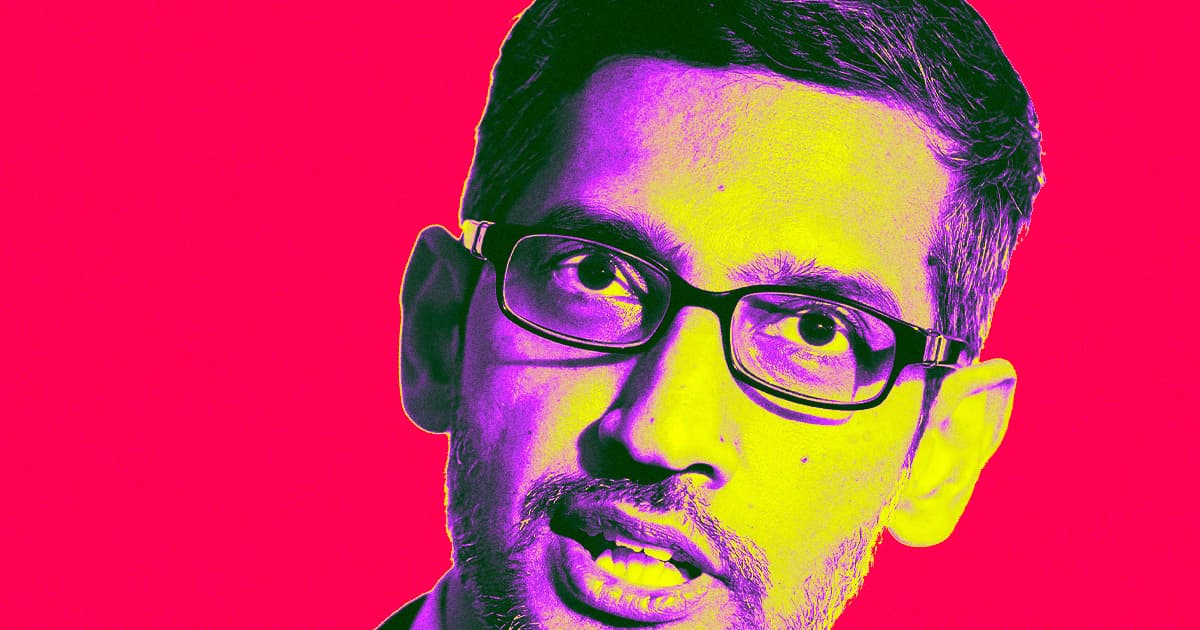 Google CEO Incredulous at Employees Mad About Loss of Perks

"I remember when Google was small and scrappy," he lamented.

"I remember when Google was small and scrappy," he lamented.

In the days of Silicon Valley past, Google made sure to cement itself as the tech world's resident Cool Boss. But not anymore! The company's productivity crackdown continues, and according to internal audio obtained by CNBC, the tension between forlorn Googlers and their CEO, Sundar Pichai, is growing.

"I remember when Google was small and scrappy," Pichai told employees at a companywide all-hands meeting this week, where he fielded questions from employees regarding slowdowns in staffing, travel, entertainment, "swag" budgets, and more.

Google hasn't had a great financial year, so it's not terribly surprising that it's trying to cut some fat. The past two quarters have been less than stellar, and according to CNBC, its third quarter earnings are expected to be down 40 percent from the previous year.

Company staffers, however, who have famously enjoyed some relatively exorbitant employee perks, aren't thrilled by the belt-tightening. During the tumultuous all-hands meeting, they even accused the operation of "nickel-and-diming" workers by cutting travel and swag funds.

"Look, I hope all of you are reading the news," the CEO responded, citing the broader economic woes and internal bureaucratic expansion as the root of the company's ongoing issues. "We are being a bit more responsible through one of the toughest macroeconomic conditions underway in the past decade."

Pichai reportedly dodged some additional questions regarding whether top execs, who rake in many millions collectively, will take any pay cuts themselves. An interesting choice, given that elsewhere in the meeting, he called for unity and sacrifice.

"I think it's important that as a company," Pichai urged his angst-ridden Googlers, "we pull together to get through moments like this."

To Pichai's credit, culture changes are tough, especially for a notoriously bean-bag-forward operation. But that said, he's right that times are tough. And clearly, their employees aren't taking those changes lying down. Not in their at-work sleep pods, at least.

More on The Great Googler Reckoning: Google Employees Alarmed That the Company Suddenly Expects Them to Do Work

Mark's Bad Year
Layoffs Hitting Facebook as Zuckerberg's Vision Stumbles
9. 30. 22
Read More
"Don't Be Evil"
Google Refuses to Pull Website Responsible for Scores of Suicides
12. 10. 21
Read More
Oh, Billy
Google Debuts Dystopic 3D Prison-Style Video Chat: Project Starline
5. 19. 21
Read More
+Social+Newsletter
TopicsAbout UsContact Us
Copyright ©, Camden Media Inc All Rights Reserved. See our User Agreement, Privacy Policy and Data Use Policy. The material on this site may not be reproduced, distributed, transmitted, cached or otherwise used, except with prior written permission of Futurism. Articles may contain affiliate links which enable us to share in the revenue of any purchases made.
Fonts by Typekit and Monotype.