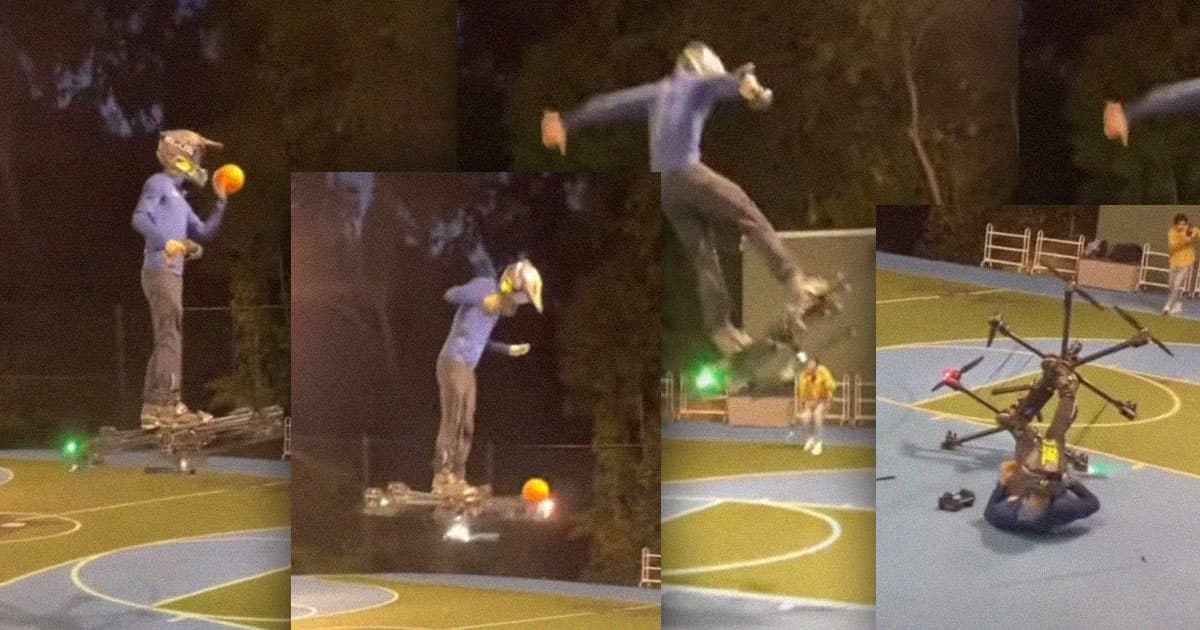 You may have seen him surfing on top of a drone like the Green Goblin through the streets of New York City.

Hunter Kowald, daredevil and mechanical engineering extraordinaire, has repeatedly made headlines with a creation he calls the SkySurfer.

But things don't always go according to plan. As seen in two new videos shared by Kowald on his Instagram account, the inventor crashed his drone and sent splinters flying while trying to shoot some hoops from midair — a reminder that even though advanced transport can be a blast, it can also be dangerous.

The small basketball appears to bounce back and impact one of the drone's rotors, causing Kowald to plummet to the ground from roughly eight feet, landing on his behind as pieces of his device go skidding across the court. The video viral after being shared on WorldStarHipHop.

"Bird attack training?" Kowald wrote in the caption of his video. "We’re trending this morning for it. I crashed because I let my guard down, it was flying fine."

Things could've gone a lot worse. A second video, from a different angle, shows pieces of the drone dangerously flying through the air, narrowly missing a bystander.

"I tensed, flew upwards, shut off the board, then let it do its thing while falling," he added.

More on Kowald: We Talked to the Guy Who Flies Around on a Giant Drone That He Built Himself

Bumper Drones
Cargo Drones Have One Problem: Not Crashing Into Things
3. 28. 19
Read More
Amazon Wants to Use Drones to Recharge the Batteries of Electric Vehicles
10. 19. 17
Read More
TTFN
Skkrt! NASA's Orion Heads Back to Earth, Leaves Moon in the Dust
Yesterday
Read More
+Social+Newsletter
TopicsAbout UsContact Us
Copyright ©, Camden Media Inc All Rights Reserved. See our User Agreement, Privacy Policy and Data Use Policy. The material on this site may not be reproduced, distributed, transmitted, cached or otherwise used, except with prior written permission of Futurism. Articles may contain affiliate links which enable us to share in the revenue of any purchases made.
Fonts by Typekit and Monotype.