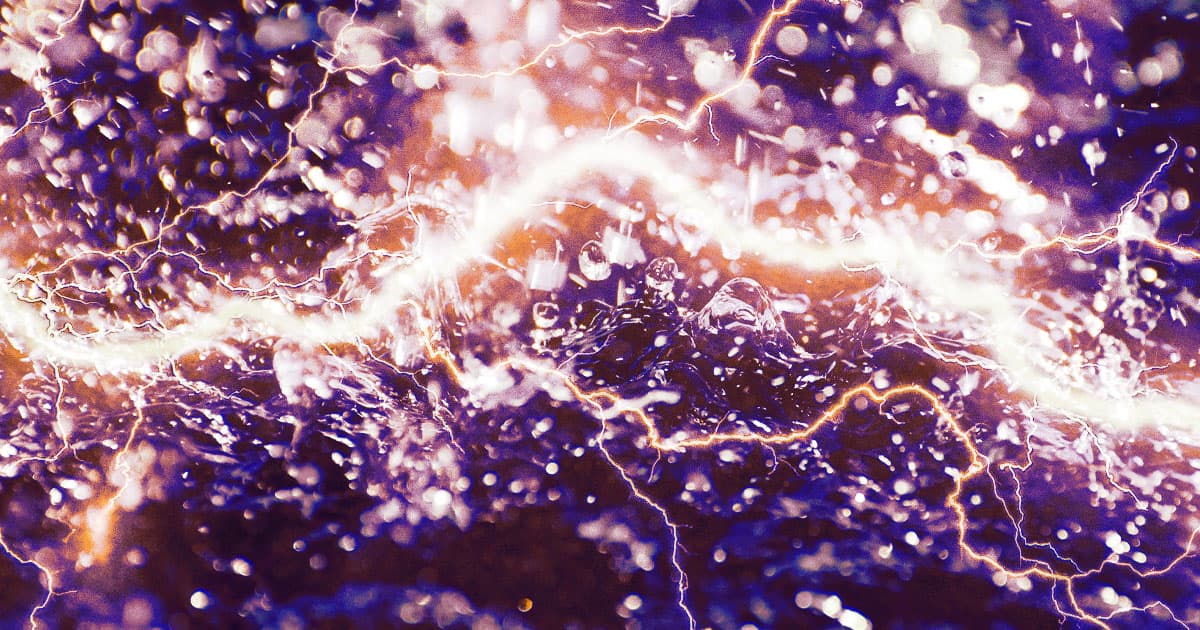 This bizarre generator can capture a flash of energy from each raindrop.

This bizarre generator can capture a flash of energy from each raindrop.

A team of engineers has figured out how to take a single drop of rain and use it to generate a powerful flash of electricity.

The City University of Hong Kong researchers behind the device, which they're calling a droplet-based electricity generator (DEG), say that a single rain droplet can briefly generate 140 volts. That was enough to briefly power 100 small lightbulbs and, while it's not yet practical enough for everyday use, it's a promising step toward a new form of renewable electricity.

The DEG uses a "field-effect transistor-style structure," Engadget reports, which can turn rainfall into short bursts of power.

The material the device is made from contains a quasi-permanent electrical charge, and the rain is merely what triggers the flow of energy, according to research published last week in the journal Nature.

The real trick will be finding a way to turn this technology into something that might be viable for people's homes — for now, it's not reliable enough to deliver a continuous supply of power, as it needs to charge up before it can let out another burst.

In the meantime, Engadget suggests, it could serve as a small, temporary power source on futuristic water bottles or umbrellas.

READ MORE: Rain may soon be an effective source of renewable energy [Engadget]

Solar Slay
Solar Powered Machine Turns CO2 and Waste Plastic Into Valuable Fuel
Jan 12
Read More
Good Neighbors
German Government Says It May Keep Nuclear Plant Open After All
7. 31. 22
Read More
Back Online
Japan May Need Nine Nuclear Reactors Turned On to Get Through Winter
7. 14. 22
Read More
+Social+Newsletter
TopicsAbout UsContact Us
Copyright ©, Camden Media Inc All Rights Reserved. See our User Agreement, Privacy Policy and Data Use Policy. The material on this site may not be reproduced, distributed, transmitted, cached or otherwise used, except with prior written permission of Futurism. Articles may contain affiliate links which enable us to share in the revenue of any purchases made.
Fonts by Typekit and Monotype.