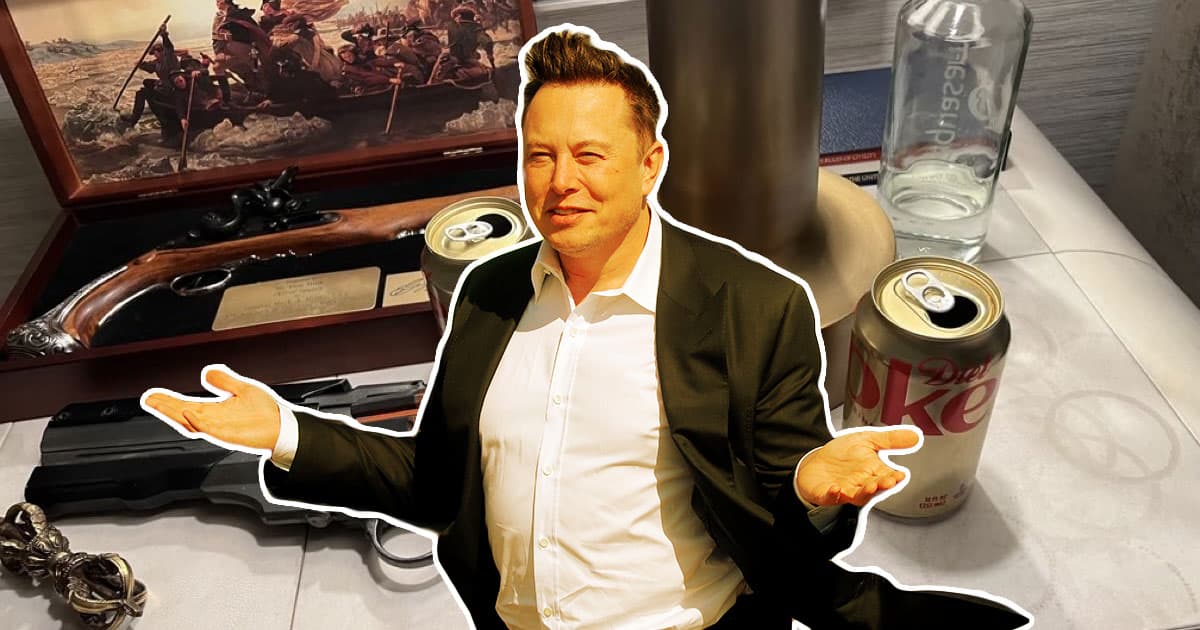 We Are Alarmed by Every Detail of Elon Musk's Bedside Table

Tesla and SpaceX CEO Elon Musk has shared an image of his bedside table — and we have questions.

The image shows what appears to be a video game gun replica, four opened cans of caffeine-free Coke, and a flintlock gun inside a display box that features a famous painting of George Washington crossing the Delaware, along with what appears to be a Buddhist amulet used for meditation.

As always, we have no idea why Musk posted the image, outside of drumming up drama — Musk's provocative way of entertaining himself — and discussions about the Second Amendment.

But we know one thing for sure: that bedside table is filthy. The man is in desperate need of some coasters, or at least a wet wipe, judging by the stains covering every surface.

"There's no excuse for my lack of coasters," Musk admitted in a follow up.

Readers were quick to connect the image to Musk's pro-gun rhetoric.

"I strongly believe that the right to bear arms is an important safeguard against potential tyranny of government," Musk told CNBC back in May. "Historically, maintaining their power over the people is why those in power did not allow public ownership of guns."

Musk, who moved to Texas last year and has recently announced he was planning to vote Republican, did dial down his view on the matter, adding that he supports "tight background checks" for all gun sales and that the sale of assault weapons should be limited.

The only problem? The modern gun in the pic is fake, and if the historical pistol is functional, it wouldn't be very practical.

There's also a question of taste; the post follows a horrific string of mass shootings that have reignited a fierce debate surrounding gun control.

As usual with Musk, though, controversy seems to be the goal.

More on Musk: Elon Musk's Crying About Trent Reznor Shows That He Is a Big, Big Baby