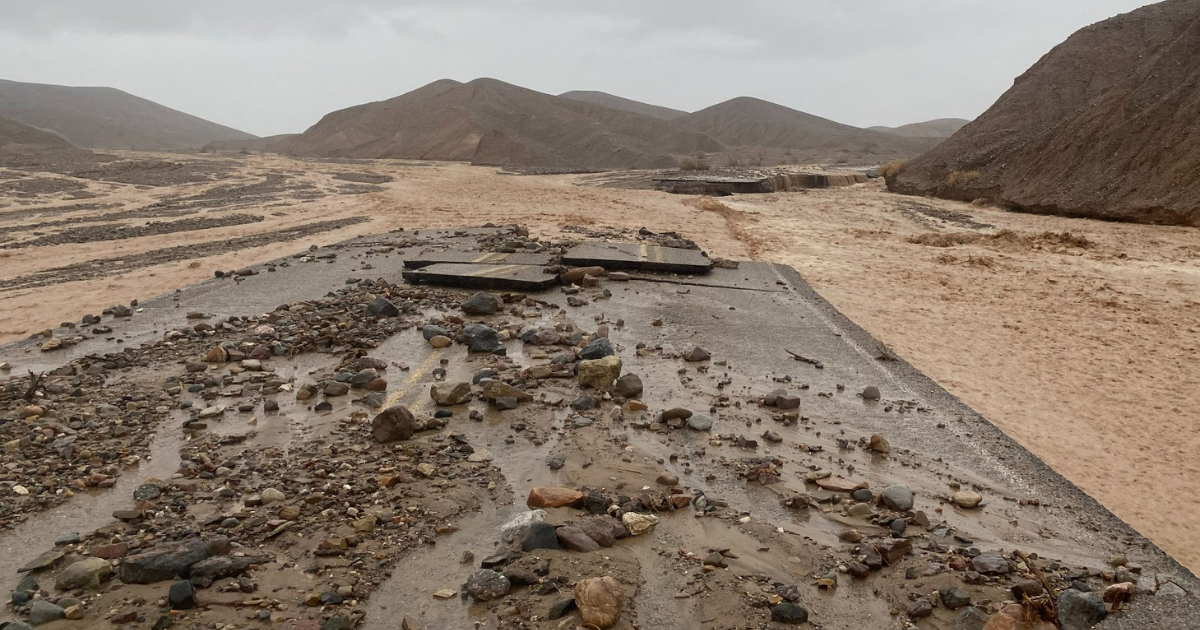 "This was the worst storm I've seen damage wise."

"This was the worst storm I've seen damage wise."

Death Valley National Park's roads remain closed after flooding trapped nearly 1,000 people on Friday. Yesterday, Axios reported that the historic flash flooding took out multiple roads and submerged as many as 60 vehicles in dirt and debris.

At least 500 staffers and 500 visitors were stuck, but CNN reported yesterday that some visitors still managed to find ways out of the California park.

Death Valley officials said in a Facebook post yesterday that conditions were safe enough for repair crews to travel with law enforcement escorts and work on fixing and clearing the park's roads, which should be re-opened Tuesday. No injuries have been reported.

Death Valley locals took to the Facebook post to express well wishes for the park, and some commented on the record-breaking storm.

"I've lived in the valley for 10 years and this was the worst storm I've seen damage wise," one commenter said online today.

The storm was so severe because it dropped about 75 percent of the region's annual rain fall in a single day, Axios reported. In a typical year, Death Valley gets about two inches of rain, and the record for single-day rainfall is 1.47 inches. This weekend, 1.46 inches of rain fell at Furnace Creek.

While the Southwestern monsoon that brought the precipitation is helping with drought conditions, the ground is unable to absorb excess water, creating dangerous flash floods. Death Valley is a dry location that boasts the world's hottest-ever record temperature.

The National Park Service addresses climate change and the future of Death Valley on its site.

"As temperatures rise in what is already the hottest place on Earth, precipitation patterns may change," NPS said. "Plants and animals in the park may be pushed to find new homes or may fall to threats posed by their changing surroundings and become extinct."