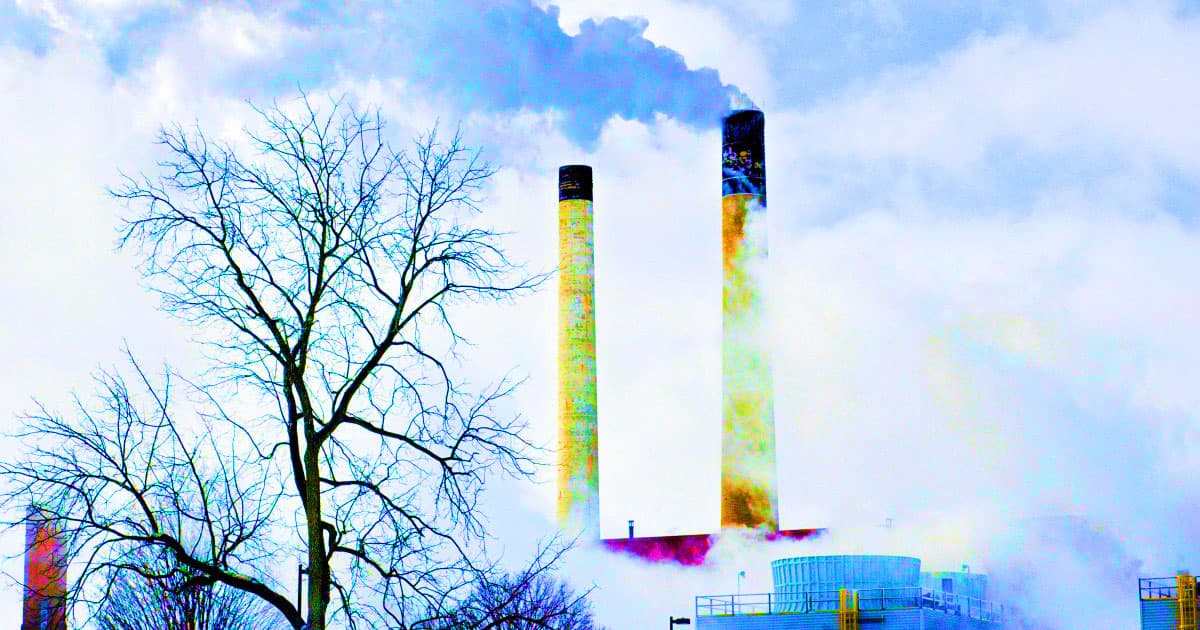 New Tech That Sucks Carbon From Chimneys Has "Tremendous Potential"

The same technology that allows scuba divers to "rebreathe" used-up carbon dioxide while underwater could be used to suck up harmful emissions — and straight out of the smokestack.

Researchers at Oak Ridge National Laboratory in Tennessee found a way to collect and store CO2 gas through a new technique: a special substance of organic chemicals called imino guanidines or BIGs bind to the bicarbonate in carbon dioxide-water solutions.

Their research was published by journal Chem on Thursday.

When captured CO2 from smokestacks is forced to bubble through a solution of BIGs and water, part of those organic compounds bind to the bicarbonate that's formed in the CO2-water solution.

The resulting product crystallizes and can be separated from the water, meaning that it can be stored rather than emitted to the atmosphere. The crystals can even be used again to capture more carbon dioxide later.

This technique "has tremendous potential," Kristin Bowman-James, a chemist at the University of Kansas in Lawrence told Science Magazine.

A Question of Scale

But it's unclear if the technology will still be as efficient and cost effective on an industrial scale. As of 2018, there are still over 350 coal power plants operating in the U.S. Sucking up that much emitted carbon dioxide would require immense amounts of BIGs.

More on carbon dioxide scrubbers: Researchers Have Found a Way to Convert CO2 Into a Usable Fuel

Hidden City
NYC's Greenery Eats Up All the CO2 From Its Cars, Trucks and Buses "And Then Some"
Jan 6
Read More
Remember Donald?
Donald Trump Goes on Bizarre Rant Against Electric Cars
9. 6. 22
Read More
Dry Dock
The Top 13 Wildest Objects That Terrible Droughts Have Revealed
8. 27. 22
Read More
+Social+Newsletter
TopicsAbout UsContact Us
Copyright ©, Camden Media Inc All Rights Reserved. See our User Agreement, Privacy Policy and Data Use Policy. The material on this site may not be reproduced, distributed, transmitted, cached or otherwise used, except with prior written permission of Futurism. Articles may contain affiliate links which enable us to share in the revenue of any purchases made.
Fonts by Typekit and Monotype.