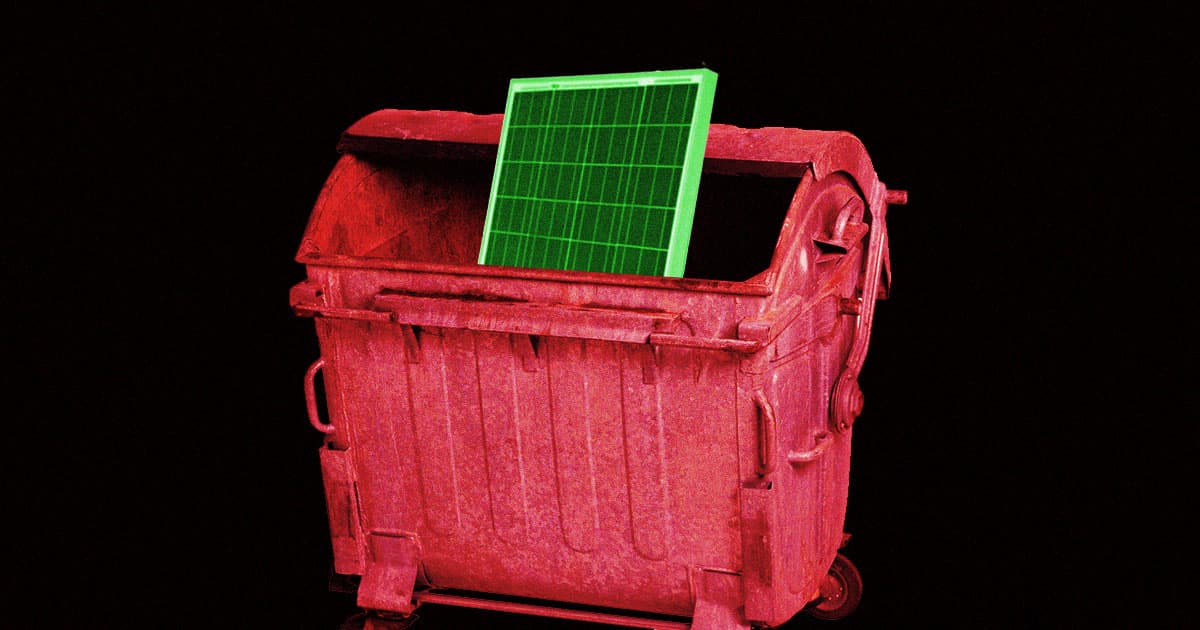 California Complains Its Junkyards Are Filling With Toxic Solar Panels

"People just don’t realize that there are toxic materials in those electronics."

"People just don’t realize that there are toxic materials in those electronics."

After more than two decades of incentivizing homeowners to install solar panels on their roof, California's landfills are starting to notice toxic waste from broken and discarded units people have thrown away.

Yesterday, the Los Angeles Times reported that heavy metals like selenium and cadmium can pollute groundwater and are used to make all the panels people are now tossing in the garbage — a grim unintended consequence of renewable infrastructure, but hopefully one that can be mitigated.

"People just don’t realize that there are toxic materials in those electronics," Natalie Click, a doctoral candidate at the University of Arizona, told the LA Times. "Once it gets crushed and put into the landfill, a lot of those toxic chemicals and materials are going to leak into your groundwater."

Only about one in 10 panels are recycled, because they produce just $2 to $4 each once broken down for parts or materials.

If that's depressing, hold up — there's some hope. Last week, the Verge reported that supply chain shortages and an increase in demand for solar products will likely increase the recyclability of old panels and drive the value of their parts and materials up.

That's good news, because it means that we could be headed toward a situation in which solar panels are more likely to be reused and less likely to end up in landfills.

Whether the ones we've already tossed aside will ever be exhumed from their final resting places is a different story. They could be useful enough to warrant resurrection, but only if some company thinks they can make money by grave digging and re-selling them. And that seems far fetched.

More on Earth and energy news: Japan May Need Nine Nuclear Reactors Turned On to Get Through Winter

Good Neighbors
German Government Says It May Keep Nuclear Plant Open After All
Jul 31
Read More
Unreliable Friends
Archipelagic Nation Sick of Other Countries Breaking Climate Change Promises
May 29
Read More
Circle of Life
Hooray! The Great Pacific Garbage Patch Has Become a Thriving Ecosystem, Scientists Say
May 1
Read More
+Social+Newsletter
TopicsAbout UsContact Us
Copyright ©, Camden Media Inc All Rights Reserved. See our User Agreement, Privacy Policy and Data Use Policy. The material on this site may not be reproduced, distributed, transmitted, cached or otherwise used, except with prior written permission of Futurism. Fonts by Typekit and Monotype.