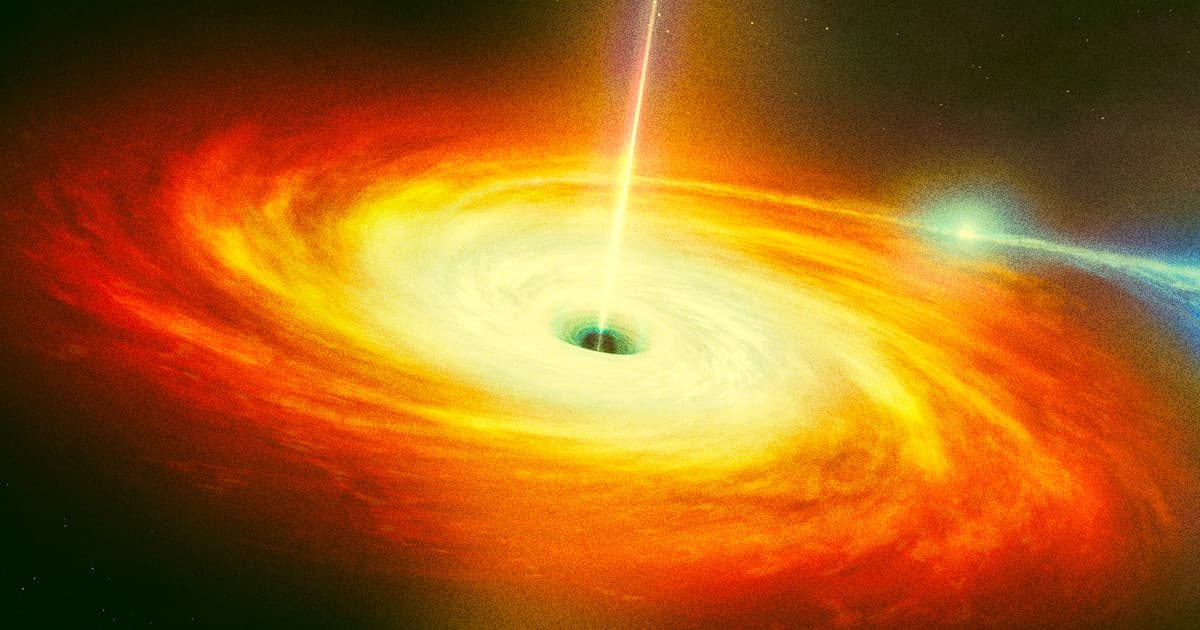 "It was something extraordinary."

"It was something extraordinary."

Using the Very Large Telescope (VLT), scientists have witnessed a black hole more than 8.5 billion light years away gorging on a star — the farthest distance at which astronomers have ever observed such an event.

In fact, they were only able to spot the grisly feeding in visible light because leftovers of the kill were ejected via a jet that happened to be pointed right at Earth, leading to the publication of two separate studies in the journals Nature and Nature Astronomy.

This ominous form of stellar destruction is called a tidal disruption event (TDE), which occurs when unwitting stars bumble just a little too close to a black hole, where the cosmic monster's immensely powerful and destructive gravity can make short work of them despite their incredible mass.

But apparently, even black holes can need to belch after a heavy meal. Around one percent of the time, a TDE causes jets of plasma and radiation to shoot out from both of a black hole's poles, like a cosmic laser beam through a bullseye.

Exactly how such a powerful jet occurs is a bit of a mystery. For now, anyway.

The rarity of observing a TDE is why it's so fortuitous that this black hole's jet pointed toward the Earth. Otherwise, it wouldn't have been picked up by the Zwicky Transient Facility back in February, which prompted researchers to aim 21 telescopes at observatories across the world, including the VLT, in its direction.

When the matter from the jet was first detected, astronomers initially expected a gamma ray burst, one of the brightest and most energetic explosions of energy in the universe, to be the cause.

Instead, they were stunned to find a black hole ripping apart a star, especially from so far away.

"This particular event was 100 times more powerful than the most powerful gamma-ray burst afterglow," explained Dheeraj Pasham, an astrophysicist at MIT and co-author of the Nature Astronomy paper, in a press release. "It was something extraordinary."

For the jet to sustain being that bright, Pasham estimated that the black hole needs to consume around half a stellar mass each year, a voracious rate of activity which Pasham described as a "hyper-feeding frenzy." That's quite the appetite.

No doubt that astronomers are hungry as well to learn more about these elusive TDEs — and this discovery just might be their meal ticket.

More on black holes: Objects We Thought Were Black Holes May Actually Be Wormholes, Scientists Say

Kilonova Blast
Staggering Galactic Explosion Blamed on Black Hole Collision
12. 8. 22
Read More
Sun Screen
The James Webb Space Telescope Is Officially Unfurling Its Mighty Sunshield
1. 1. 22
Read More
Mad Libs
A Philosopher Is Trying to Figure out What Black Holes Really Are
2. 15. 19
Read More
+Social+Newsletter
TopicsAbout UsContact Us
Copyright ©, Camden Media Inc All Rights Reserved. See our User Agreement, Privacy Policy and Data Use Policy. The material on this site may not be reproduced, distributed, transmitted, cached or otherwise used, except with prior written permission of Futurism. Articles may contain affiliate links which enable us to share in the revenue of any purchases made.
Fonts by Typekit and Monotype.