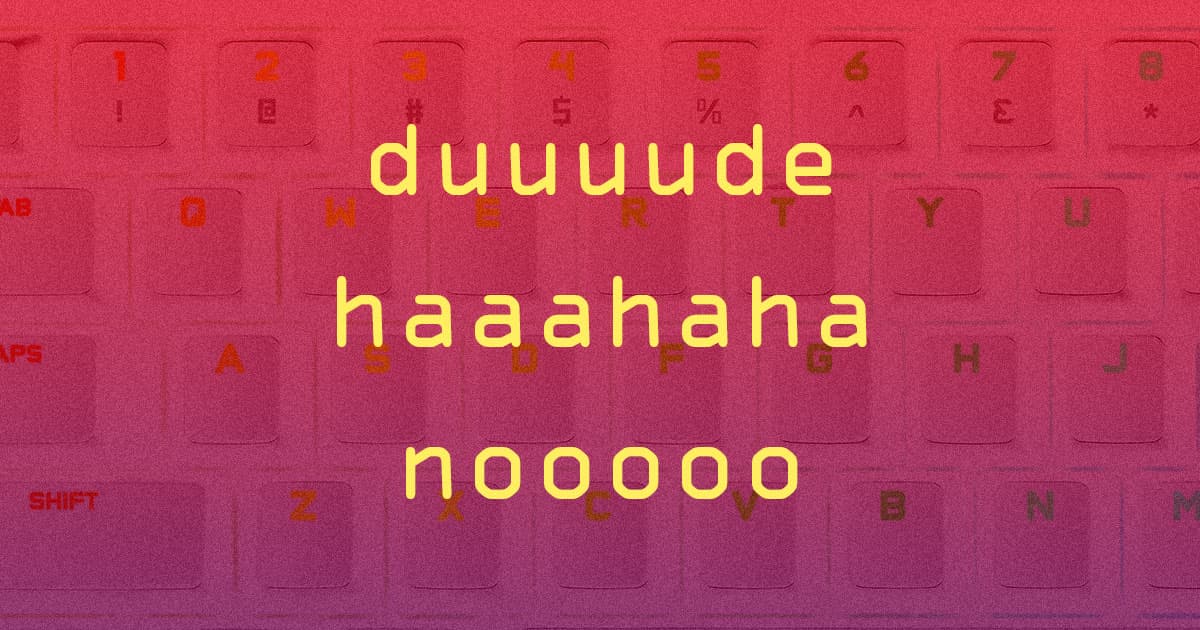 To Train Better AI, Scientists Are Studying Your Weird Tweets

Can AI understand that "dude" refers to a person while "duuuude" means "yikes"?

Can AI understand that "dude" refers to a person while "duuuude" means "yikes"?

One of the biggest challenges for language-processing artificial intelligence is figuring out the underlying meaning of slang, colloquialisms, and intentional misspellings.

In order to help those hapless machines out, a team of mathematicians from the University of Vermont started to analyze how young people deliberately stretch words when they type. For instance, they've quantified the semantic difference between stretched words like "hahaha" and "haaahaha" in hopes that future AI algorithms can learn to understand us in the informal ways we actually communicate online.

In their research, published Wednesday in the journal PLOS One, the team analyzed the so-called "stretchable words" that appeared in 100 billion tweets posted over the past eight years. They then came up with two measurements: balance and stretch. For example, "lololol" has a high balance value whereas "nooooo" doesn't because only one letter is repeated.

That could help algorithms — and future historians — understand that "dude" refers to a person while "duuuude" is synonymous with "yikes."

Ultimately, the researchers argue that our dictionaries don't reflect the way people actually communicate, and understanding the stretched words common on social media could fill an important knowledge gap.

"We were able to comprehensively collect and count stretched words like 'gooooooaaaalll' and 'hahahaha'," the researchers said in a press release, "and map them across the two dimensions of overall stretchiness and balance of stretch, while developing new tools that will also aid in their continued linguistic study, and in other areas, such as language processing, augmenting dictionaries, improving search engines, analyzing the construction of sequences, and more."

READ MORE: Exploring the use of 'stretchable' words in social media [PLOS]

More on language processing: A Facebook AI Unexpectedly Created Its Own Unique Language

Bot Wreck
Red Ventures Knew Its AI Lied and Plagiarized, Deployed It at CNET Anyway
Yesterday
Read More
Pleading the Fifth
Extremely Embarrassing Evidence Emerges Against CEO of “Robot Lawyer” Startup
Wednesday
Read More
Faking Face
Twitter Is "Verifying" Accounts With AI-Generated Faces
Tuesday
Read More
+Social+Newsletter
TopicsAbout UsContact Us
Copyright ©, Camden Media Inc All Rights Reserved. See our User Agreement, Privacy Policy and Data Use Policy. The material on this site may not be reproduced, distributed, transmitted, cached or otherwise used, except with prior written permission of Futurism. Articles may contain affiliate links which enable us to share in the revenue of any purchases made.
Fonts by Typekit and Monotype.