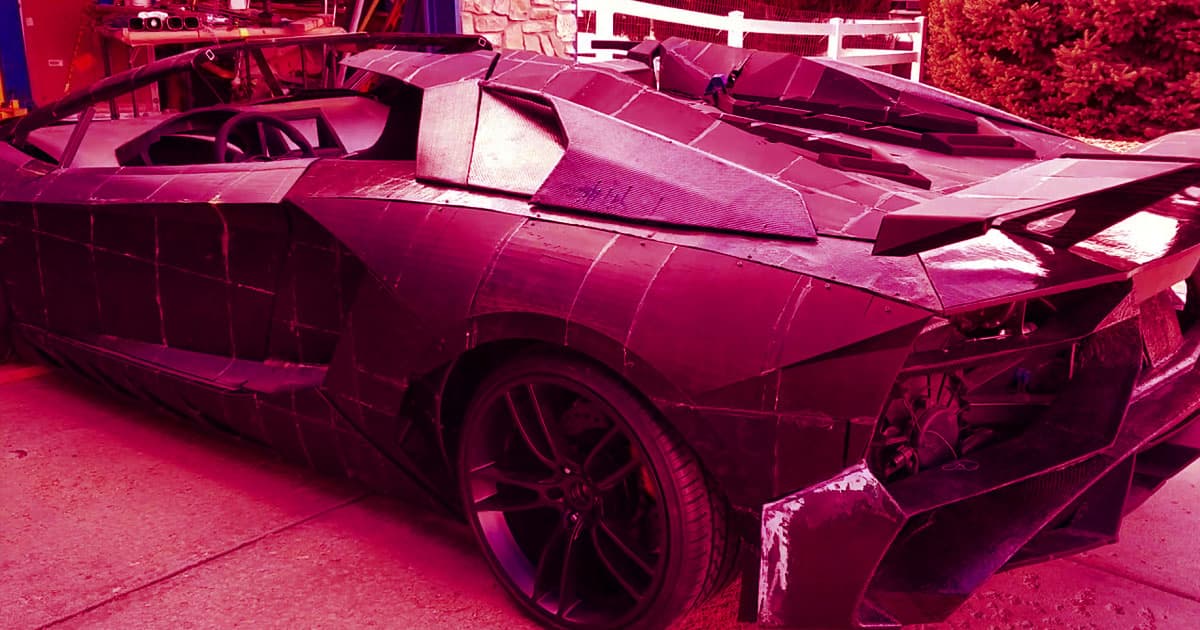 Fifteen years ago, the Motion Picture Association of America released an anti-piracy public service announcement — that has since turned into a meme — aimed at those who illegally downloaded media online.

"You wouldn't steal a car," a message read during the opening credits of most commercial DVDs at the time.

Now, 3D printing could make the silly message a reality. Physicist Sterling Backus is 3D printing a full-scale Lamborghini Aventador-inspired supercar in his own backyard, as 3D Printing Media Network reports. He and his son have been working on the project for almost a year and a half. Sterling has already put about $20,000 into the project.

The duo printed the body panels, taillights, headlights, and even air vents from a variety of plastics. To ensure the car was safe to drive, Backus wrapped some of the printed parts in carbon fiber.

The car is technically not made up of 3D printed parts in its entirety, though: the engine, chassis and other structural pieces were gathered separately.

“Our objective became showing the car off at the local schools as a STEAM project, to get kids interested in Science, Technology, Engineering, Art, and Math," Backus told 3D Printing Media Network.

And no, it's not piracy, according to Sterling.

"The parts’ design is based on the Lamborghini Aventador, but we have changed each panel significantly, to add our design flair," Backus added. "In addition, no molds are made, and none are for sale. This is a one only project, and not for sale."

More on 3D printing: These Scientists Are 3D-Printing New Body Parts for Athletes

As Self-Driving Cars Hit Roadblocks, Autonomous Boats Could Take Traffic Off The Streets
5. 24. 18
Read More
Ring The Alarm
Whistleblower Claims Facebook Can Secretly Drain Your Phone's Battery on Purpose
3:40 PM
Read More
Music for Robots by Robots
Google's Powerful New AI Can Turn Text Into Music
2:57 PM
Read More
+Social+Newsletter
TopicsAbout UsContact Us
Copyright ©, Camden Media Inc All Rights Reserved. See our User Agreement, Privacy Policy and Data Use Policy. The material on this site may not be reproduced, distributed, transmitted, cached or otherwise used, except with prior written permission of Futurism. Articles may contain affiliate links which enable us to share in the revenue of any purchases made.
Fonts by Typekit and Monotype.