The "nation" wants to defend Earth from celestial threats. 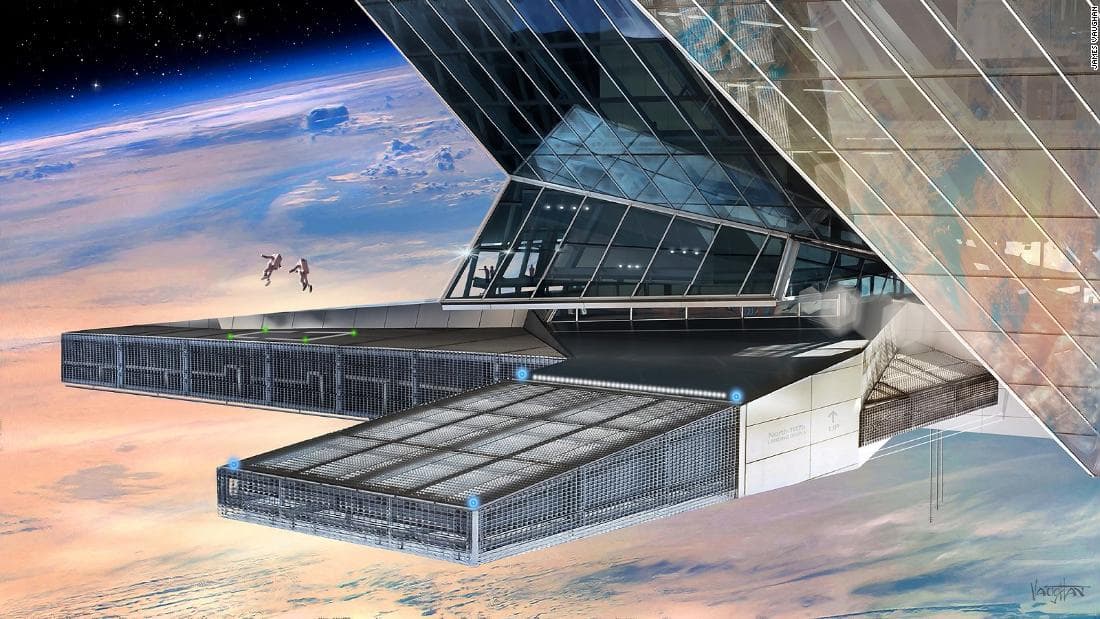 The self-declared Space Kingdom of Asgardia, a nation founded by a Russian aerospace engineer and billionaire, just deployed its first satellite into orbit.

Asgardia is currently a non-profit non-governmental organization based out of Vienna, Austria. But its leaders want to eventually build a kingdom in space that mines asteroids and defends planet Earth from meteorites, space debris, and other threats.

"Asgardia will be a space nation that is a trans-ethnic, trans-national, trans-religious, ethical, peaceful entity trying to settle the humanity in space," Ram Jakhu, the director of McGill University's Institute of Air and Space Law and one of Asgardia's founding members, said during a June press briefing.

Its new satellite is called Asgardia-1. The blocky object is technically called a nano satellite or "nanosat," weighs about as much as a newborn baby, and is roughly the size of a loaf of bread.

Asgardia's tiny spacecraft contains a 512-gigabyte hard drive loaded with "the nation's constitution, national symbols, and the personally selected data of the Asgardian citizenship," according to a statement emailed to Business Insider.

"Asgardia-1 has now been deployed in a low earth orbit," the statement said, "making Asgardia the first nation to have all of its territory in space."

But at least one space law researcher says that, legally speaking, the feat may be "much ado about nothing."

The plan to launch the satellite was announced during a press briefing and June 13, and the effort was funded by Asgardia co-founder Igor Ashurbeyli, a Russian aerospace engineer and billionaire.

The Cygnus left the space station on Wednesday, rocketed to a higher altitude, and shot Asgardia-1 and two other nanosats into space with a spring-loaded cannon built by NanoRacks.

Asgardia-1 won't do much more than orbit Earth from about 280 miles above the planet, though it does store data submitted by Asgardian citizens. There are currently about 154,000 citizens of Asgardia, and the first 100,000 to register were promised 500 kilobytes of space each for upload on the hard drive (500 kb is less than the data used by one frame of a typical DVD video).

"Maybe the photo of your little cat or of your neighbor, of your mother, or a child... whatever comes to your mind, this will be for as long as Asgardia exists. In other words, forever," Ashurbeyli said in June.

All the files Asgardians uploaded are visible to fellow citizens, and the platform is accepting more for future spacecraft. So far, nearly 14,000 Asgardians have contributed files, including poems, personal letters, songs, and photos of weddings, cats, dogs, birds, aliens, and even President Donald Trump shaking the hand of India's prime minister, Narendra Modi.

Asgardia-1 will slowly fall toward Earth over the next five years and eventually burn up in the planet's atmosphere. But Ashurbeyli said in June that the data uploaded will be copied to future Asgardian satellites, as well as spacecraft that go to "the moon and anywhere in the universe ... Asgardia will be."

'Much ado about nothing'?

With the satellite successfully deployed into space, the nation will now turn to its parliamentary elections that run through March 2018, according to Asgardia's statement.

"Anyone who is 18 or older, and has accepted the Constitution of Asgardia, will automatically be assigned to an electoral district which represents their spoken language," the statement said.

Asgardia has enough people who've applied for citizenship to qualify for consideration as a state by the United Nations, since the minimum is 100,000. But it's unlikely the world will acknowledge Asgardia as a sovereign nation, even now that it has claimed territory in space.

"Legally speaking this is much ado about nothing," Frans von der Dunk, a professor of space law at Nebraska College of Law, told Business Insider in an email. "The concept of territory has been pretty well defined in international law, and it does not include 'artificial' territory such as satellites anymore than it does include ships, aircraft or oil platforms."

Asgardia, he added, is "nowhere near a state in the classic sense of the word — even if you accept that the satellite has quasi-territory."

But the biggest problem for Asgardian sovereignty, von der Dunk said, is the lack of a permanent population in space. Even then it's a stretch, he said, citing several examples of nations, including Palestine and Taiwan, which have territory and a large permanent population, yet lack a functional government — and thus aren't recognized as states. (Legal experts also see other issues beyond Asgardia's territorial claims and statehood, as Motherboard previously reported.)

Business Insider previously contacted the United Nations Office for Outer Space Affairs(UNOOSA) for clarification on whether current space law would permit the existence of a nation and territory in space, but UNOOSA representatives did not answer our query.

Instead, UNOOSA directed us to the text of five UN treaties that govern activities in outer space. Article II of the first and most important part of that legal framework, called the Outer Space Treaty, prohibits "national appropriation" of anything in outer space "by claim of sovereignty, by means of use or occupation, or by any other means."

But von der Dunk doesn't think Asgardia, or something like it in the future, couldn't eventually form a recognized nation or state in space.

"This may be the germ that 50 years from now will create a true nation in outer space," von der Dunk told Popular Science last year.

How to build a space kingdom

For now, Asgardia's proclaimed territory — i.e. Asgardia-1 — is actually bound by US law, since American companies launched it from US soil aboard a primarily NASA-funded mission.

But Asgardia's founders eventually want to launch a space station and have people live there permanently.

"We'll start small and eventually people will be going there, and working, and having their own rules and regulations ... This facility will become an independent nation," Jakhu previously told Business Insider.

No public details exist yet as to what an early colony might look like, how big it will be, or what expense it'd incur. However, building space stations of any size or kind and putting people on them is a very, very expensive proposition. The football-field-sized ISS, for example, took 18 nations and more than $100 billion to build. Meanwhile, the cheapest ride to orbit today is SpaceX's Falcon 9 rocket, which costs between about $43 million and $65 million per launch.

An Asgardia spokesperson declined to disclose the organization's funding when Business Insider asked in October 2016, but claimed billionaire backer Ashurbeyli had put forth a substantial amount of money (via his company, Aerospace International Research Center) to keep the Asgardia project going.

Asgardia's organizers have drawn plenty of criticism, but Jakhu brushes it off.

"Anyone who tries out-of-the-box things is initially ridiculed," Jakhu previously said. "Everything that's amazing starts with a crazy idea. After a while, science fiction becomes science fact, and this is an idea which is just being initiated."

This story was updated with new information after its original publication on December 7, 2017.

Disclosure: The author of this post registered as a citizen of Asgardia as part of his reporting.