A small soundbar with big implications. 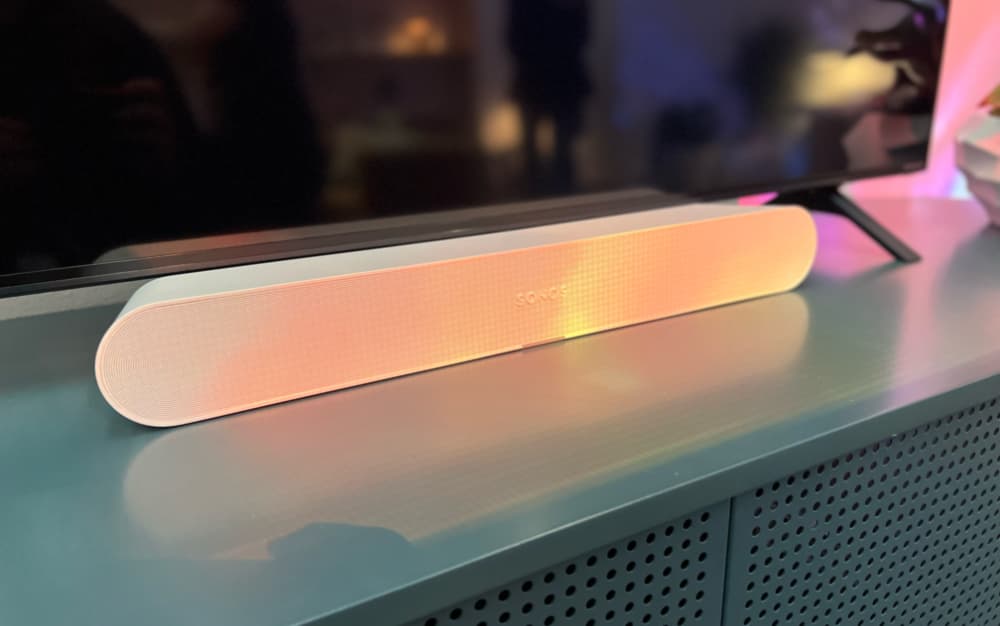 The Ray is the latest smart soundbar from Sonos; it officially launches on June 7 for $279, and its design challenges everything we've come to expect from this type of speaker.

Soundbars have become popular because flat-screen TVs have gotten so thin that it's become hard — if not impossible — to fit a decent-sounding speaker system inside the set itself. In audio, bigger is almost always better, but the Ray is Sonos' smallest soundbar to date.

The Sonos Ray is two inches wide, which is roughly half the length of Sonos' premium Arc soundbar, and three inches thinner than the second-generation Sonos Beam. The Ray was seemingly designed to address the fact that a lot of people who want a great-sounding soundbar don't have very much space.

It took a lot of effort to cram everything we appreciated about Sonos' larger soundbars into a svelte, apartment-friendly package, but the company managed to pull it off with few compromises.

What Is the Sonos Ray?

Sonos’ Streamlined Setup Process Got Us Up and Running in Minutes

The Ray benefits greatly from Sonos' continued effort in streamlining the setup process for all of its audio gear. We connected the Ray to an outlet and our TV using the included power and optical audio cables respectively, and it promptly showed up as a new device in the Sonos app on our phone.

We added the Ray to our existing Sonos system, let the app know the room it was in, downloaded a quick software update, and was all set in a matter of five minutes. The Sonos app also allowed us to sync our TV's remote to the Ray, which let us control its volume more easily. Sonos doesn't bundle a dedicated remote with the Ray, so the only other way to adjust its volume would be through the Sonos app.

Sonos deserves credit for making the Ray's setup process so straightforward, and including every cable you need in the box. If you've never used any of Sonos' other gear, and need to set up an account, you'll still be all set to go within 10 to 15 minutes.

The Sonos Ray’s Sound Is Better Than We Imagined

We've been testing the Ray for almost two weeks, and we're still unsure how Sonos managed to offer such a high level of audio performance from a small speaker.

The Ray is a stereo soundbar, with three drivers (the part of a speaker that creates sound) on the right and left sides, plus one in the center. In many cases, a company will position the right and left drivers outward to create a wider soundstage (the sensation of being able to hear distinct sounds on either side of you), but that's not the case with the Sonos Ray. All of the Sonos Ray's drivers are pointed forward, and yet we could clearly hear the direction-specific pieces of audio were coming from during our tests.

A spokesperson from Sonos explained that the Sonos Ray's driver array was designed to allow you to position the soundbar inside of a media console or credenza without sacrificing audio quality. If its drivers were pointed outward, the sound from the Sonos Ray would bounce off the sides of these enclosed areas and muddle the soundstage.

We watched an assortment of TV shows and YouTube videos during our time with the Ray, and liked what we heard, but the real test came when we watched The Adam Project on Netflix. The science fiction adventure flick had plenty of action scenes,  which included space ships zooming, bombs exploding, and hand-to-hand combat with futuristic weapons. We were shocked at how well the Sonos Ray handled loud noises — there was plenty of oomph in the explosions, but no crackling sounds that would denote distortion. At certain points during the film, we could've sworn there was a subwoofer in the room handling low frequency sounds because they made such an impact.

The Sonos Ray is action-movie friendly, but its sleeper feature may be the way its center-channel driver handles speech. Dialogue in the videos we watched and games we played was always easy to hear, even if characters were speaking during a particularly complicated scene. Explosions are nice, but so is exposition. We found the balance between speech and sound effects to be just right using the Sonos Ray's default settings, but you can enable a dedicated dialogue boost mode if you'd like.

There weren't any obvious audio performance issues during our time with the Ray, and it compared well to larger soundbars we've tested in the past. The Sonos Ray doesn't support Dolby Atmos, a type of surround sound that uses forward and upward-firing drivers to deliver a 3D audio effect, but that's okay. Sonos set out to create an excellent-sounding, compact stereo soundbar, and it succeeded. If you're interested in Dolby Atmos, we recommend checking out the second-generation Sonos Beam, or the Sonos Arc.

If you want to create a 5.1 surround-sound system over time, Sonos allows you to sync the Ray with a pair of its One speakers and a Sonos Sub. In that system, the Sonos Ray would act as the front-left, center-channel, and front-right speakers.

The Ray Is a Little Short on Smart Features

The Ray is the only Sonos soundbar that doesn't have a microphone, which means you can't control it using Amazon's Alexa or the Google Assistant. The lack of voice control doesn't detract from the Sonos Ray's core functionality, but it's worth noting. The soundbar does support AirPlay 2, which means you can stream audio to it directly from your iPhone, iPad, or Mac. That’s convenient if you use Apple gear, but it doesn't have Bluetooth. Once again, this isn't a dealbreaker, but you shouldn't get a Sonos Ray because the company's other current-generation hardware has a lot of bells and whistles.

This deficiency in smart features is somewhat negated by the fact that the Sonos Ray is connected to your TV's optical audio port instead of an HDMI input. You can use that spare HDMI port to connect a media streamer like the Amazon Fire TV Stick, Apple TV, ChromeCast, or Roku to your TV. Those media streaming devices typically allow you to control your TV using a smart assistant, which means you get the benefits of voice control with the Ray's excellent audio quality.

There's no getting over the fact that built-in smart features would make the Sonos Ray better, but we're glad Sonos cut them in favor of optimizing the way it sounded.

The Bottom Line: Sonos’ Ray Is the Best Soundbar in Its Size Class

We tested the Sonos Ray for several hours over many consecutive days, and have been continually impressed at its audio performance given its small size.

This is the perfect soundbar for dorm rooms, mid-sized bedrooms, or smaller living rooms. The Ray is so small that you could conceivably pack it in a suitcase for a long vacation. That'd be a little extra, but it's possible. Gamers, cinephiles, and TV show lovers will find a lot to love about the Ray, though its lack of smart features may put you off.

That would be a shame, though, because the Sonos' strict focus on making the Ray sound as good as possible deserves attention. This is the best soundbar in its size class, and the competition isn't even close.