Scientists Have Figured Out How Chameleons Change Color: Geometry and Physics 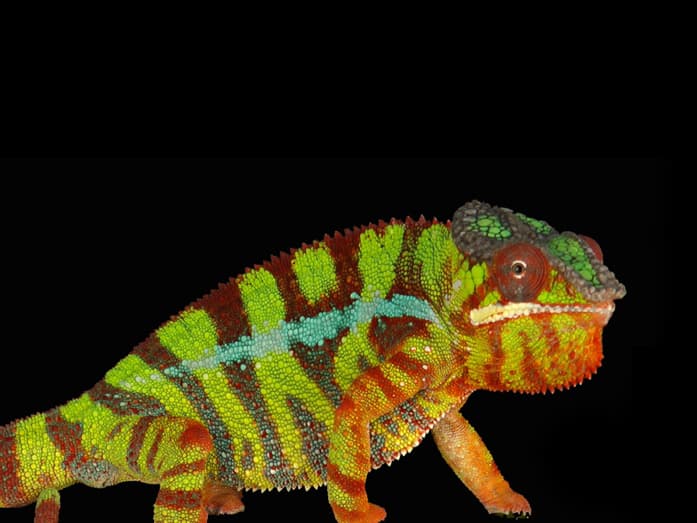 For years, many scientists assumed that the chameleon's ability to change colors came from its ability to move pigments around inside of its cells; however, it seems that this isn't the case at all. Instead of using pigments, the little animals rely on a lot of geometry and physics.

Pigments, like the ones that we have in our own skin, generally operate by absorbing most colors of visible light except one. The one wavelength that is not absorbed is the color that we see. To break it down, this means that a purple pigment will absorb most of the wavelengths of visible light, and it will only allow the purple wavelengths to bounce off of its surface.

Chameleons, on the other hand, use structural color in order to present different appearances.

Structural color is a system that manipulates geometry on the nanoscale by forcing certain wavelengths of light to bend in specific ways. Scientists ultimately found two layers of skin with iridophores (these are the cells that utilize structural color). On the top layer, these were filled with tiny nanocrystals of guanine that are arranged into a lattice formation. On the chameleons, the formations have precise spacings between each crystal, and it is this spacing that allows the animals to give off different colors.

In the light spectrum, blues are located on the short end while red colors are on the long end. As a result, when the guanine crystals have short spaces between them, they reflect the bluer wavelengths. When the crystals are spaced farther apart, they reflect the longer wavelengths. These factors are combined with pigment cells in order for the chameleons to change their appearance.

The scientists were able to determine this by analyzing the animals nanoscale structure using transmission electron microscopy.

Learn more in the video below:

Read This Next
Sundowned
Mexico Bans Startup From Future Solar Geoengineering Experiments
Knew It All Along
Exxon Scientists Knew About Global Warming for Decades While Company Denied It
Solar Slay
Solar Powered Machine Turns CO2 and Waste Plastic Into Valuable Fuel
Dim Sun for Breakfast
Startup Says It's Started Releasing Chemical Into Atmosphere to Dim Sun
Hidden City
NYC's Greenery Eats Up All the CO2 From Its Cars, Trucks and Buses "And Then Some"
More on Earth & Energy
Dishonorable Disc...
Yesterday on the byte
Scientists Alarmed by Video of Deep Sea Mining Company Spewing Waste Into Ocean
Save Yourselves
Feb 5 on the byte
Furious Marsupial So Thirsty For Sex That It’s Dying, Scientists Warn
Stem Ware
Feb 3 on the byte
Scientists Discover World's Oldest Preserved Vertebrate Brain
READ MORE STORIES ABOUT / Earth & Energy
Keep up.
Subscribe to our daily newsletter to keep in touch with the subjects shaping our future.
+Social+Newsletter
TopicsAbout UsContact Us
Copyright ©, Camden Media Inc All Rights Reserved. See our User Agreement, Privacy Policy and Data Use Policy. The material on this site may not be reproduced, distributed, transmitted, cached or otherwise used, except with prior written permission of Futurism. Articles may contain affiliate links which enable us to share in the revenue of any purchases made.
Fonts by Typekit and Monotype.