Scientists Assert That Earth is Really Made of Two Different Planets 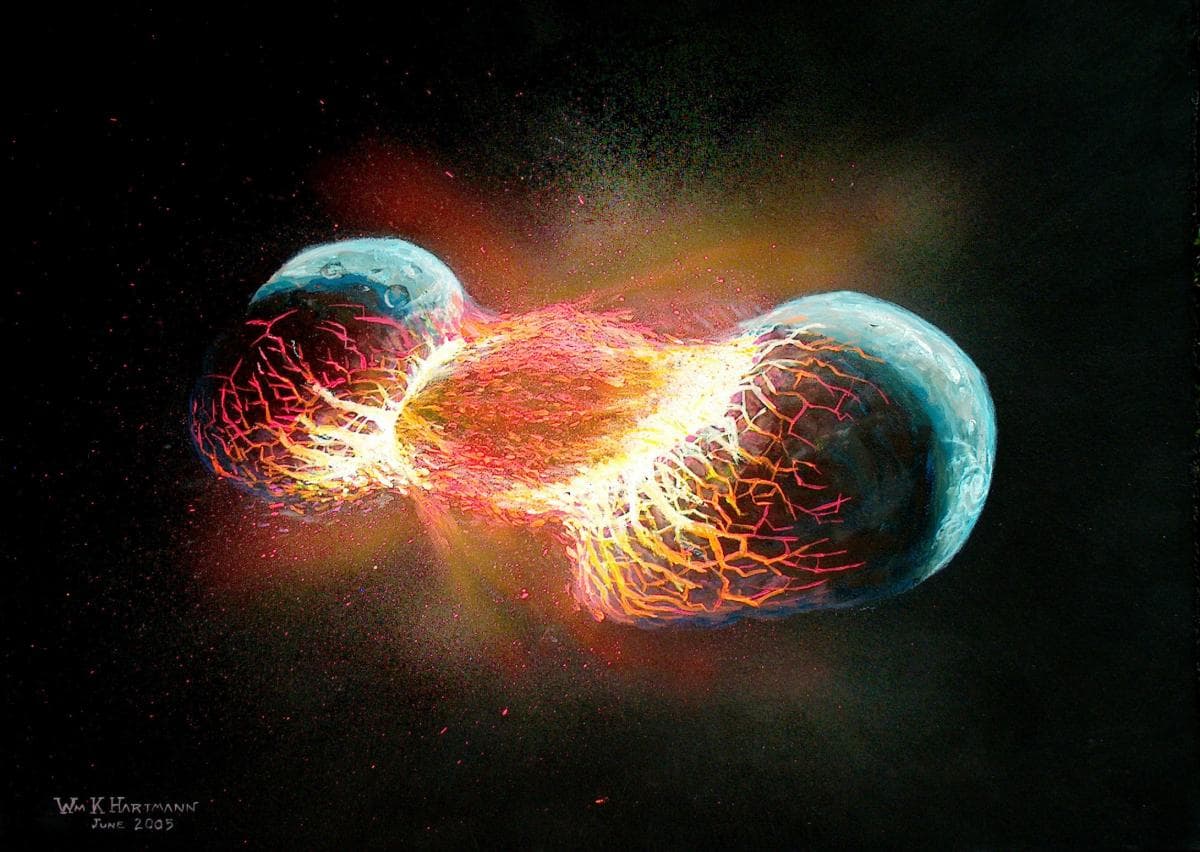 Fossils of a Dead World

Astronomers and planetary scientists have long suspected that the Moon was generated by a gigantic collision of two worlds in the earliest ages of our Solar System.  Known as the “Giant Impact Hypothesis” (or the “Big Splat”), it posits that a nascent planet had the misfortune to form in a Trojan orbit with our own.

And some 100 million years or so after the birth of the Solar System, our planet and this interloper experienced a truly earth-shattering impact, since two planets cannot occupy the same orbit for very long without something giving.

The result was the Earth-Moon system as we now know it.

But the details of the whole scenario have eluded us.  Many have supposed that Theia—that’s the rather poetic name bestowed upon the long-dead world, chosen from the Titaness of Greek mythology who was the mother of the Moon—merely side-swiped the Earth at a 45-degree angle, or greater.

If that were the case, one would expect the Moon to be derived largely from the crustal material of Theia, and the Earth and its satellite would possess differing chemical signatures.  A study in 2014 by a German team seemed to support this notion.

But the new research, led by a team from UCLA, has quashed this idea, and definitively shown that the Earth-Theia impact was a head-on collision whose ultimate issue was the formation of two brand new, co-orbiting planets.

And this eventually led to the Earth and the Moon.

The evidence comes in the form of oxygen isotopes—that is, atoms with differing numbers of neutrons—fossilized within the crustal rocks of the Earth and Moon.  The vast majority of oxygen comes in the form of O-16, your run-of-the-mill oxygen atom with 8 protons and 8 neutrons; but small quantities of heavier isotopes, O-17 and O-18, form a unique mixture that represents the chemical fingerprints, so to speak, of any planetary body.

Earth has a unique complement of oxygen isotopes, as does Mars, Venus, Mercury, etc.

The team analyzed seven Moon rocks returned by the Apollo 12, 15, and 17 missions, as well as six terrestrial volcanic rocks, five from Hawaii and one from Arizona.

“We don’t see any difference between the Earth’s and the moon’s oxygen isotopes; they’re indistinguishable,” pronounced Edward Young, a professor of geochemistry and cosmochemistry at UCLA, and lead author of the new paper, which was published in the January 29 issue of Science.

The team used sophisticated techniques and technology to make precise measurements, so there is little doubt that the conclusions are invalid and will probably settle the debate.

What Happened to All the Water?

The implications of the study, however, will take some time to work out.  What is obvious is that the material of Theia is evenly distributed throughout both the Earth and Moon, suggesting that whatever came before was obliterated and re-amalgamated into something new.

It really isn’t a matter of a collision between Theia and the “Earth,” but rather a cosmic smash-up between Theia and some other, unknown and nameless planet that once happened to occupy our current orbit.  Both planets were destroyed, and—phoenix-like—were reborn anew as the Earth and Moon we know and love today.

Another mystery to be resolved is the issue of what happened to the Earth’s water.  The collision surely vaporized whatever of it existed on either planet; perhaps, Young surmises, subsequent collisions with H2O-bearing asteroids and comets delivered the Earth’s future oceans.

The Solar System was, after all, still in the process of being born.

Read This Next
Futurism
Little Big Splat: Giant Impact May Have Formed the Moons of Mars
More on Off World
Drama Bomb
Yesterday on the byte
European Space Agency Halts Plans to Send Astronauts to Chinese Space Station
Futurism
Yesterday on the byte
Asteroid Mining Startup About to Launch First Mission
Carry On, Wayward...
Yesterday on the byte
NASA Says Lucy Spacecraft Will Forge Ahead With Busted Solar Array
READ MORE STORIES ABOUT / Off World
Keep up.
Subscribe to our daily newsletter to keep in touch with the subjects shaping our future.
+Social+Newsletter
TopicsAbout UsContact Us
Copyright ©, Camden Media Inc All Rights Reserved. See our User Agreement, Privacy Policy and Data Use Policy. The material on this site may not be reproduced, distributed, transmitted, cached or otherwise used, except with prior written permission of Futurism. Articles may contain affiliate links which enable us to share in the revenue of any purchases made.
Fonts by Typekit and Monotype.