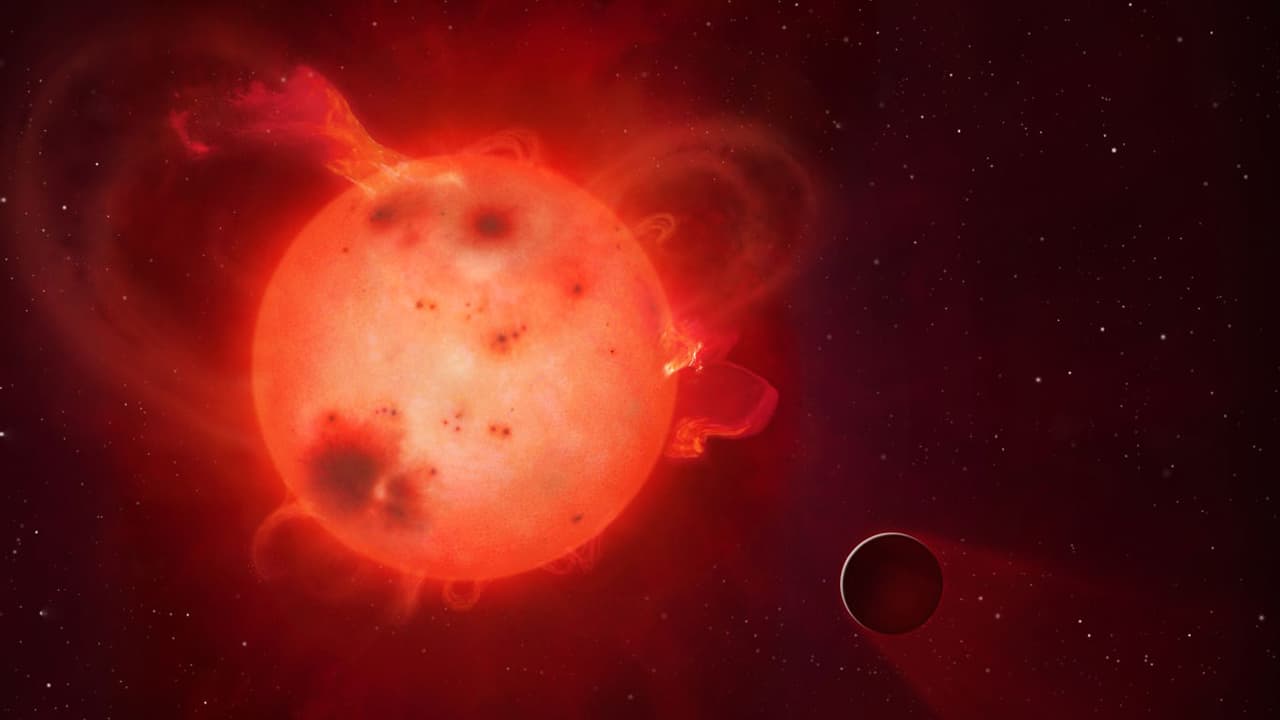 New research just found that the recently discovered "most Earth-like alien planet," Kepler-438b, could have been rendered uninhabitable by vast quantities of radiation. The planet's atmosphere is thought to have been stripped away as a result of radiation emitted from a superflaring Red Dwarf star that is known as Kepler-438.

The research was conducted by  the University of Warwick and was published in Monthly Notices of the Royal Astronomical Society.

To date, the exoplanet has the highest recorded Earth Similarity Index, as it is both similar in size and temperature to the Earth; however, it is much closer in distance to the Red Dwarf than the Earth is to the Sun. Unfortunately, on this star, superflares regularly occur every few hundred days and are about ten times more powerful than those ever recorded on the Sun.

They emit energy equivalent to 100 billion megatons of TNT. Though superflares themselves are unlikely to have a major impact on Kepler-438b's atmosphere, a dangerous phenomenon associated with powerful flares, called coronal mass ejection (CME), has the potential to destroy any atmosphere and render the planet uninhabitable.

Dr David Armstrong, lead researcher of the University of Warwick's Astrophysics Group, explained in a press release: "Unlike the Earth's relatively quiet sun, Kepler-438 emits strong flares every few hundred days, each one stronger than the most powerful recorded flare on the Sun. It is likely that these flares are associated with coronal mass ejections (CMEs), which could have serious damaging effects on the habitability of the planet."

As Chloe Pugh of the University's Centre for Fusion, Space and Astrophysics, notes: "While flares themselves are unlikely to have a significant impact on an atmosphere as a whole, there is another more dangerous phenomenon associated with powerful flares, known as a coronal mass ejection."

Coronal mass ejections are huge explosions of plasma from the Sun’s outer atmosphere (which is called the “corona”). These phenomena can release energy that is equivalent to over a million 100-megaton hydrogen bombs

Pugh continues, "The likelihood of a coronal mass ejection occurring increases with the occurrence of powerful flares, and large coronal mass ejections have the potential to strip away any atmosphere that a close-in planet like Kepler-438b might have, rendering it uninhabitable. With little atmosphere, the planet would also be subject to harsh UV and X-ray radiation from the superflares, along with charged particle radiation, all of which are damaging to life."

Of course, these is a little hope. If it turns out that the planet has a magnetic field like Earth, then it may be at least partially shielded from some of the effects. But keep in mind, these flares are ten times more powerful than anything that we've ever seen, so even if there is a magnetosphere, it may not help too much (depending on the associated CME). And if the planet lost its atmosphere, there is no hope. As Armstrong notes, "it could be irradiated by extra dangerous radiation and be a much harsher place for life to exist."

Read This Next
Hall Effect
Test Suggests Ion Thrusters Could Power Crewed Interplanetary Missions
Shoo
Scientists Warn Giant Asteroid Is Actually Swarm, Nearly Impossible to Destroy
What Does It All Mean?
The Second Alien Probe We Detect May Be Particularly Bizarre, Scientist Says
A Sip of Opal
NASA Discovers Precious Gemstones on Mars
And He Scores
We Are Completely Puzzled by This Video of a Chinese Astronaut Playing Ping-Pong in Space
More on Off World
CHON: Legacy
3:19 PM on the byte
James Webb Discovers Coldest Ice in Known Universe, Harboring Molecules Essential For Life
Is There?
3:14 PM on the byte
NASA Setting Up Facility For Mars Rock Samples That Might Contain Alien Life
Stunning Centaur
Yesterday on the byte
James Webb Spots Asteroid With Its Own Saturn-Like Rings
READ MORE STORIES ABOUT / Off World
Keep up.
Subscribe to our daily newsletter to keep in touch with the subjects shaping our future.
+Social+Newsletter
TopicsAbout UsContact Us
Copyright ©, Camden Media Inc All Rights Reserved. See our User Agreement, Privacy Policy and Data Use Policy. The material on this site may not be reproduced, distributed, transmitted, cached or otherwise used, except with prior written permission of Futurism. Articles may contain affiliate links which enable us to share in the revenue of any purchases made.
Fonts by Typekit and Monotype.